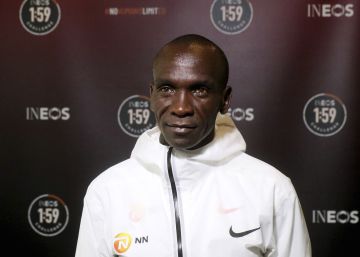 The Kenyan athlete Eliud Kipchoge, 34, looks for something that nobody has achieved so far in Vienna this Saturday: complete a marathon (42,195 kilometers) In less than two hours. The feat, if achieved, would not be considered, however, as a world record or the mark would be registered in the official books for all external aid that has been prepared in a millimeter way.

The list of grants is extensive. The departure has been scheduled for 8.15 because, at that time, in the capital of Austria there is a forecast of seven degrees and, when finished, 12, with absence of wind and low humidity. It has 41 hares that, in five teams of seven, plus six reserves, run in V, like an inverse arrow to the march that eats all the aerodynamic drag and transfers the rebufo of the nearby vehicle that opens the way with a giant stopwatch. Behind the K of Kipchoge, the graphics include two more athletes who, according to the mathematical essays, steal any turbulence.

Among the hares are some of the best athletes today, such as the three Norwegian brothers Ingebrigtsen, the Ethiopian Salemon Barega, the 1,500m Olympic champion Matthew Centrowitz, Paul Chelimo, Augustine Choge, López Lomong … They are relieved every five kilometers, with which break a fundamental norm, that everyone who participates in the race must try to finish it, and cannot enter and leave it at will. The work of the hares and the rebuild of the car that opens the race are 1m 40s more profit.

The other key element is the shoes, which are the latest model developed by Nike, the latest evolution of the Vaporfly controversies, the Next%. A custom shoe with a carbon plate on the sole with spring effect and discs filled with pressurized fluid. The calculations of the specialists indicate that the shoes represent an advantage in efficiency and economy of stride of 4%, which provides a 2.6% improvement in performance, or a saving of 1m 30s.

The circuit is a straight line with two roundabouts at the ends, 9.6 kilometers, which rotate 4.4 times. They have calculated that the roundabouts, one of great radius and another minor, barely subtract speed. The intake of liquids in the supplies has been perfected and no type of anti-doping control has yet been announced.

This experiment is the improvement of what Kipchoge already did in the circuit of Monza (Italy), in 2017. That day ended in two hours and 25 seconds, touching the wall. To get it this time, you need to run every kilometer at an average of 2m 50s, which is equivalent to 422 consecutive races from 100m to 17s each, with no rest between any.

The Kenyan has the record of the legal world of distance in 2h 1m 39s, reached in Berlin in 2018, 100 seconds above the feat he is pursuing now.

FC Barcelona: Fati joins the campaign ‘No home without food’

Sevilla FC: Vaclk: “The derby is a very special match, I will do my best to win it”