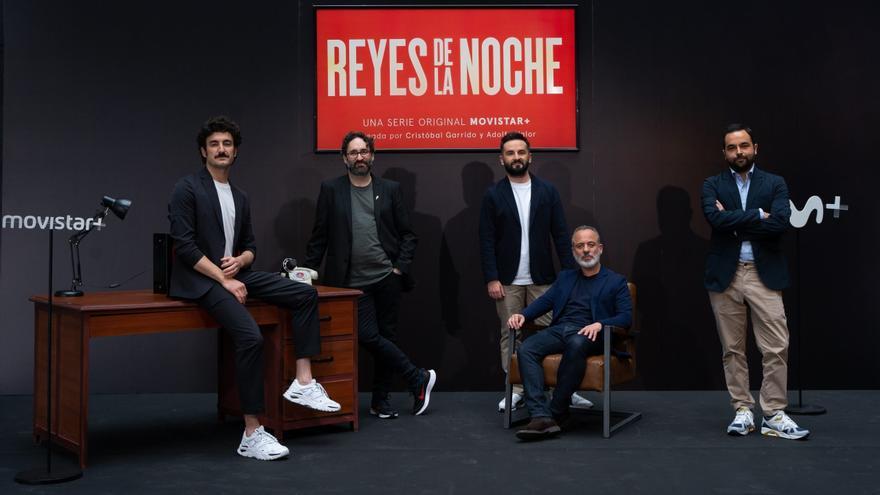 Madrid, May 11 (EFE) .- The voracious fight for the audience between sports journalists José María García and José Ramón de la Morena in the eighties and nineties was the inspiration to create “Reyes de la noche” (Movistar +), a Fictional comedy with nods to the wildest times of sports radio starring Javier Gutiérrez and Miki Esparbé.

The series, which opens next Friday, has been presented this Tuesday at a press conference in which its creators and protagonists have insisted that, although it is inspired by events that happened, it is purely a fiction.

“We did not want to do a kind of José María García, but the collective imagination would lead us to think of a priest like him”, said the actor Javier Gutiérrez, who plays Paco “El Cóndor”, an “absolute leader of those radio nights with millions of listeners “and” a guru for the masses. ”

“I think we have done a very wild series but I even think we have fallen short. Because you talk to the journalists of that time and they say that it was even more beast than what is reflected in the series, “said the winner of two Goya awards, who tried, unsuccessfully, to speak with the legendary sports journalist.

On the other side of the ring is Jota Montes, who brings “new airs, a different professional ethic”, someone “very well prepared, the student who is advantageous because he is next to a great teacher who reaches a point where he no longer takes communion. with the teacher’s practices and sees the opportunity to shoot by his side “, Esparbé explained (” Losing the North “,” It’s for your good “).

And, as the female counterpart of the two, is Marga Laforet, played by Itsaso Arana (“Seventeen,” “The Virgin of August”), an announcer who has to fight hard to find her way into a prominently male radio station.

“She is deeply intelligent, super-prepared, the first in her class, but she has had to be in this jungle” full of men and “bad habits where she tries to break through”, Arana has detailed.

“Reyes de la noche” is the result of the ideas of Cristóbal Garrido and Adolfo Valor (“I leave it whenever I want”), who for years had wanted to pay homage to the wildest times of radio in Spain, and, after a deep investigation, they wrote a fiction script adding the best winks to reality.

“We have not been slaves to biography or real history, but there are episodes that were fascinating, such as the ludo timbas with Jesús Gil, the pilots’ strike and, in general, the ruthless use of personal information by the protagonists of the stories to try to get the exclusives “, Valor has pointed out.

“We wanted to take the best of that war and for the truth to be at the service of fiction so as not to be slaves and not make a Wikipedia. We wanted the characters to have a life of their own, for the plot to have a life of its own and to flow between fiction, but with nods to reality, ”said Garrido.

The series is directed by Valor and by the winner of a Goya Carlos Therón (“I leave it whenever I want”, “Look what you’ve done”), who explained that one of the most important things has been that the series “sounded like radio”.

“We had something pending with the radio and we had to tell it well. For me it has been a pleasure to enter that world,” he explained.