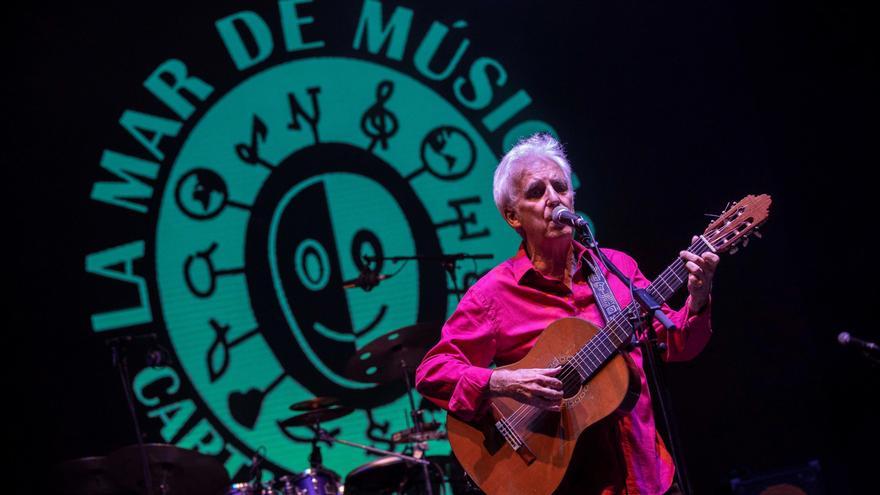 Cartagena (Murcia), July 18 (EFE) .- The singer Kiko Veneno has debuted tonight at La Mar de Músicas with a concert in which he has reviewed all his great successes to the delight of the Cartagena public, thus discharging a historical debt that was in force for more than a quarter of a century.

The southernmost singer born in Gerona has played the distraction at the beginning of the performance, in which, alone accompanied on the piano, he has addressed "La Felicidad", the closing theme of his latest album, "Hambre", which has preceded , already with the sextet "La banda del resumbe" on stage, "Los delincuentes" and "Memphis blues".

This updated legacy has been made clear with "Los tontos", a song recorded in duet with C. Tangana, in which he encouraged those present in the Parque Torres auditorium to "dance sitting down, which can also be done", introducing one of those messages enigmatic with a social background - "light is very expensive, but especially the other one" -.

The modern touches have continued with "Self-portrait", in which Veneno, who has ironized that the protagonist of the song is not him, has shown that he has known how to adapt like few others over the years and to new music, being with each new album an inexhaustible source of creation.

The artistic transcript of José María López Sanfeliu has made it clear that he personifies one of the most fascinating careers of modern Spanish music, understanding modern as that in constant evolution according to the times and the generations, with songs like "Traspaso", " Neighborhood Superheroes "or" New Moon ", also from his latest work.

"I'm fatal / of the voice / and the lyrics / I have forgotten" opens "Hambre", the title track of his latest album, but it has become clear, according to the support shown by the public, that they did not associate the singer with that part of the song.

Nor did the artist forget other songs on his discography, such as "Veneno", "Dice la gente", "It is hot", "La rama de Barcelona" -in homage to Peret's rumba- and "Respeto", before lead the closing of a performance that is as expected as it is satisfactory for the audience of La Mar de Músicas.

The public devoted to the Kiko has witnessed an artist who marks the soundtrack of a lifetime, as one who does not want the thing, with themes that always lurk in their heads, like that "I miss" with which there were difficulties to stay seated or "In a white Mercedes", with which he did not arrive, but went to the dressing rooms before starting the encore.

And to keep the level high, the repertoire of the night continued with the shocking "Obvio" only with a guitar duo, "What matters to me is you" and his chanted "Joselito", that particular tribute to José Marín Rodríguez , fisherman, boisterous and drinker, resident of Conil de la Frontera (Cádiz), who has ended the night.

Previously, the patio of the old CIM has once again passed the stress test that Califato 3/4 subjected it to yesterday with another Andalusian band, Derby Motoreta's Burrito Kachimba, which has left its mark in Cartagena with its badass mix of Andalusian rock with psychedelia

The Sevillian band, barely three years old, have carried their "kinkidelia" recovering in their performance the Andalusian rock heritage of the seventies, mixing it with psychedelia and impudence.

The second day of the festival has been completed with the concerts of Queralt Lahoz and his songs that speak from flamenco and rap about love, heartbreak and survival, the past of his family in Granada and memory, and María de Juan who has presented his first album, 24/7.

The third day will bring singer-songwriter Travis Birds to the port city this Sunday, the second presence in this edition of Niño de Elche, accompanied by Raül Refree, and the closing by the Galician Sen Senra, a skilled trap mixer, trip- hop and electronics.