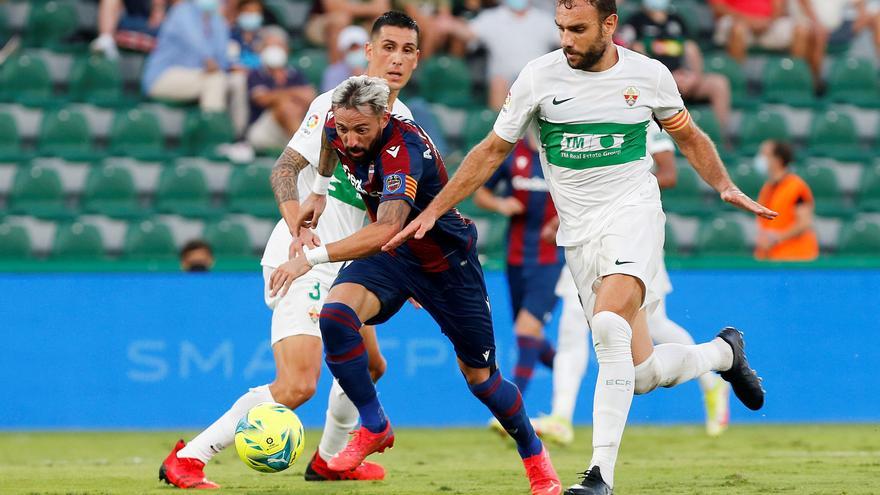 Elche and Levante the points and the defensive errors were distributed in a regional duel in which the Valencian team, despite the numerous casualties with which they faced the match, made more merits than their rival to achieve victory.

The good performance of the Elche goalkeeper, Kiko Casilla, especially in the first half, prevented Levante from adding their first win of the season in a match in which both teams took advantage of serious defensive errors by their rival to score.

Levante, after the revolution made by their coach in the line-up, started the derby in a dominating plan, subjecting Elche, which he barely allowed to breathe.

The dominance and depth of Paco López’s team did not take long to translate into scoring occasions. Morales, very active during the first minutes, had the option to open the scoring after dribbling Verdú, but his shot was taken out by Kiko Casilla.

A few minutes later it was Dani Gómez who won the back of the Elche defense, but his shot was cleared again by the Catalan goalkeeper of Elche.

The group from Elche, overcome, could hardly be deployed in attack, where Darío Benedetto and Lucas Pérez were mere spectators of the Levantine monologue.

Slowly Elche managed to adjust lines and stabilize the gameAlthough it was an unfortunate action by the Levante defense, after half an hour of play, which blew up the game.

A bad defensive rebound, including a rebound, allowed Benedetto to face Cárdenas. The Argentine, however, did not solve well twice, but the rejection fell to Lucas Pérez, who beat the Valencian goal with a cross shot.

Levante’s reply was immediate and it was again Morales who brought the danger to the Elche area with a center that Son finished off, again forcing Casilla to intervene correctly.

Paco López’s team repeated the script at the beginning of the second act and settled back in the Elche field, although their clear dominance was not transformed on occasions beyond a failed header by Dani Gómez.

Nevertheless, Levante found the goal unexpectedly, after a serious mistake by Gonzalo Verdú that allowed Dani Gómez assist Morales so that the captain surpassed Kiko Casilla in hand to hand.

Just a minute later, Levante was able to complete the comeback after a new action by Morales, but this time the Levante captain’s shot found a great response from Casilla.

Escribá reacted and gave Argentine Javier Pastore and Pere Milla and Elche into the fieldThrough possession of the ball, he managed to balance the game, but the danger was always carried by Levante through an inspired and pungent Morales.

Elche also had their option after a shot from Guti, a pass from Pastore, from the edge of the area that touched the post. The game, however, declined in the last minutes with the changes.

Levante lost intimidating power without Morales, who left the field with physical problems, while Elche, led by Pastore, only grew at the end to scare with two heads from Pere Milla and Carrillo who did not find the net.

Incidents: Match corresponding to the fifth day of the Santander League played at the Martínez Valero stadium in front of 11,507 spectators.