The Catalan writer publishes a book that alternates humour, seriousness and bad blood to theorize about the usefulness of certain 'bad' feelings.

A dinner party for two heterosexual couples that aims to introduce the hostess's new boyfriend. From the outset there would be no reason for something to go wrong, the four are adults and are in tune, but from the beginning an animosity that is more and more evident between the two male members of the quartet takes shape. Slightly derogatory comments, grim looks, an empty wine glass that is not refilled and finally, the surrender of the one who runs away claiming that the children are home alone. Everything could end there, were it not for the last verbal thrust of the opponent: "If you want to leave because you are fed up with us, go, but do not use the children as an excuse & rdquor ;. Metaphorical kick in the pit of the stomach.

It is the first example that Kiko Amat put in your essay The enemies. Or how to survive hate and take advantage of enmity, that the editorial just published Anagram in your collection New Notebooks. A volume of just 130 pages in which the author lists categories of enemies – natural, invisible, wrong, instantaneous, sterile, evaporated – and explains, or tries, how to take advantage of that hatred. Always from his perspective and relying on quotes from other thinkers (from Nietzsche until Plutarch) who already thought about the matter a long time before. They are not few, because everyone carries a hater, to a greater or lesser extent, inside.

Kiko Amat speaks with this newspaper by videoconference, although the communication channel does not change his way of expressing himself at all. He is always fast-talking, generous in his responses, and has a well-developed ability to make jokes of himself. His regular readers, both of articles and narrative, will not be surprised by the tone of his new book, and those who approach his writing for the first time will discover that seriousness is not at odds with laughter. In fact, it may be the best way to deal with such thorny issues as contempt for other people.

"Is a book that is full of hate and rage because if not, it would have no reason to be. But also an attempt at self-knowledge where the comedy is already given because I don't know how to write any other way and the things that happen to me are so ridiculous that if I didn't tell them in a humorous way they wouldn't make sense”, he comments. “My books have a lot of a confessional part, a certain non-victim self-flagellation. The essay is an exploration of rancor that is not written for rancor & rdquor ;.

Exactly one year has passed since Amat published his last novel, also with the Anagrama publishing house. titled Rematch, takes place in the environment of a criminal organization made up of hooligans Nazis of FC Barcelona and, as can be deduced, the hatred is more than present. “This essay is a fork of Rematch, not because it has so much to do with it, but because quotes and theories came to mind that had no place in the novel. I pointed out a lot and many ideas about revenge and hatred and the desire for revenge were appearing. Little by little I began to see that there was an argument with substance, an explanation of hatred, and a new book came out. At first I thought it was the typical postida article and then I saw that there was too much for it to be just that & rdquor ;, he maintains. Enmity can arise for many reasons. Personal offense may be the most common, but hatred towards another person can also be inexplicable and erupt from the first minute the (unintentional) enemy makes an appearance. Amat's list of instant enemies is headed by the hippies, but stingy people also appear in it, people who walk on their toes, posh people who pretend not to be, serious writers, career politicians, the French or “anyone who drinks something, whatever , deadly seriously & rdquor ;. A crazy salad of rejected people who do not attend to more reasons than the internal mechanisms of the author.

His list of enemies: hippies, tightwads, people who walk on their toes, posh pretending not to be, serious writers..."

“With the book I wanted to explain that antipathy that is so deep, sometimes so automatic, so abstract and incredibly instantaneous. Why I dislike this turkey so incredibly is a matter of severe analysis. I've known him for five minutes, maybe he works with children, I don't know & rdquor ;, he expresses. “There is also another thing that the book says and that is that my hatred does not imply that these people are bad people. Sometimes they tell me why I hate someone who is so nice and that has nothing to do with it. Sometimes it's for an abstract thing, sometimes it has to do with me. That person is my enemy because he is. Maybe in other areas of his life he is an excellent person, but that doesn't change my judgment either."

You can even hate fictional characters who, after all, respond to profiles that exist in reality. His is clear: "Yesterday I saw a frame in a work in which the aunt of amelie. That profile is unisex, false clumsy. It makes me flash with hatred at first sight. Even more so if we take into account that in 99.9% of cases it is an imposture, nobody is like that, it is true. From time to time you meet someone, but they are in the asylum & rdquor ;, he says.

“Everyone plays a role, but there are two polarities: one is the weak one and I say it in the first person, who, in order not to be crushed, pretends to be stronger than he is and exempts him from gravity. But that a guy who is clearly an 'alpha' or an aunt that everyone pays attention to being clumsy arouses a homicidal hatred in me. I see it almost as a stalker 'serial killer', they are doing it to get a very dirty profit & rdquor ;, sentence.

And where is the benefit of enmity?

Hate can work like gasoline for a car. If that energy that is spent detesting and wishing the evils of the universe to a person is used in overcoming oneself, it is taking advantage of it. But don't let this statement read like advice from a self-help book or a coach emotional: that overcoming serves to not let the enemy win. There is no search for healing but for survival. 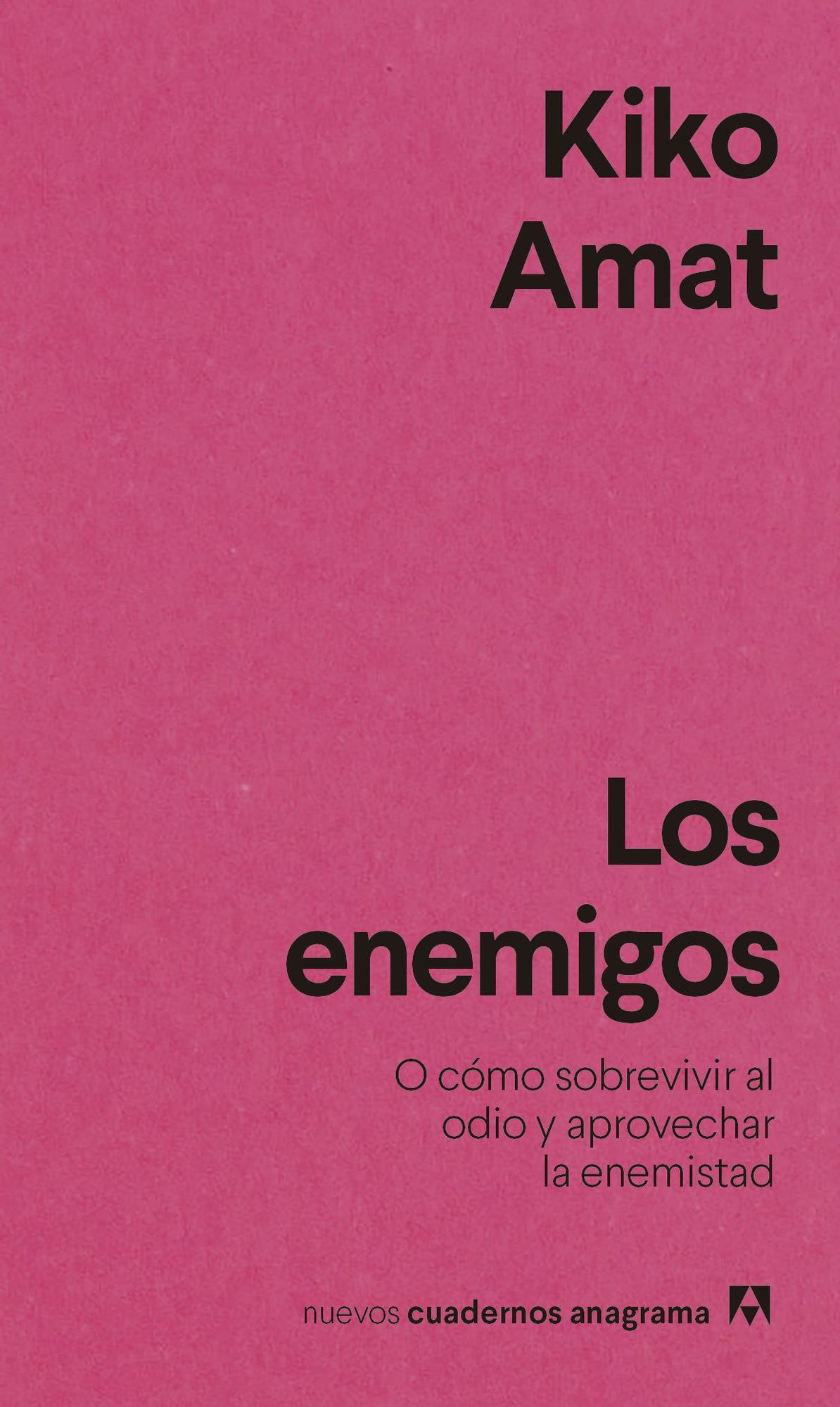 “It is a priceless engine. I wouldn't have done anything if I didn't have this flaming hatred. The luck I've had is that it didn't blind me, but rather it was: 'I have such and such an enemy, I'm not going to make it so easy for them'”, develops Amat. He gives the example of when he was writing his novel before the hurricane (Anagrama, 2018): “It was like: 'I would sleep a little longer, but no. I have to get up at 6:30 because I have to write a good book.' If my enemies are going to be able to me that they cannot say that I wrote a lazy or bad novel & rdquor ;.

It is not the only suggestion that the writer makes to take advantage of hate - one can also follow the advice of Montaigne and direct thought elsewhere – but the book also leads to reflection and warning. There is no morality, but the end (it is not a spoilers) leaves comedy aside, a script twist that the author had well thought out. “I wanted to finish the book in a slump so that no one can leave just thinking how well they had a good time. You have to walk out of the book like you've been kicked in the proverbial gut. And also so that it is understood that this is fat and marks a life. That this is coming from a harsh and seedy place, but without self-pitying lamentations. Everything has reasons for being, everyone has their own and this is one of mine. I wanted it to be seen that no one comes out of hate unscathed, and neither does the author”.