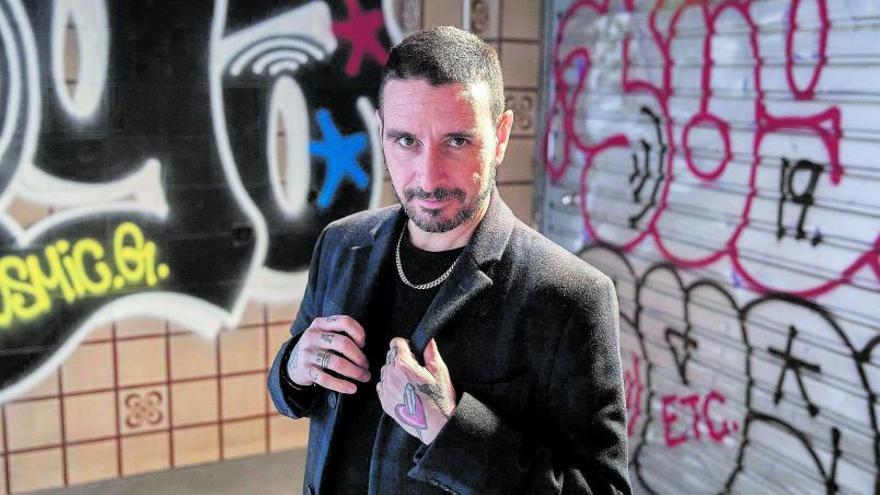 Do you know what an ‘iron maiden’ is?

The sarcophagus stabbing inward? I quite like medieval torture, but have we met to talk about this?

Getting into the shoes of the two protagonists of ‘Revancha’ has something of getting into an ‘iron maiden’. Comfortable characters are not.

Why? Caesar would be an avenger, a vigilante.

Custom made. I mean, a hit man.

And the other, Amador, is a neo-Nazi hooligan who has gone with his gang to crime.

It has no torture whatsoever. Anyone who has written knows that there is a pleasure in getting into the shoes of the bad guy, because it is a way out for the less benign or more rabid part that we all have, although some hide it. And, as gangster movies and series have shown, what happens with the stories that affect the daily life of the crooks is that the more they explain them, the more you understand their circumstances. You may not love them or forgive them, but you do suffer for them. When you meet the monster, you look beyond its fur and see what happened to it to be there. I speak in general terms. Of course there is the psychopathic margin, which has no explanation. The more you know a psychopath, the clearer you see that he is an empty shell.

Okay, Caesar is ‘just’ a terrible instrument against evil with impunity. What ‘saves’ Amador from being an unappealable dodgy?

He couldn’t help being like that. It’s very easy not to be bad if they haven’t done bad things to you. But if they have done them, it is almost inevitable to be bad. According to what cards they gave you, it is very difficult to do good. Evil is a wide range in which Amador is at a still redeemable point. It has a soft side yet, it is not hollow. I paint why it is the way it is.

The Lokos del Cid and Amador have their jargon, like the droogs in ‘A Clockwork Orange’.

I like both the book and the film, although the reason is different: a far-right mafia should have had a jargon, but I did not want to give it that of my youthful panda because this is not about me and my life. So I made one up.

Anthony Burgess used himself for the nadsat of the Slavic-speaking droogs. How about you for the lokos slang?

I did a dive on several super-minority Indo-European languages. And when he found a cool word, he would remove it and adapt it to make it sound natural. And there are a couple of Catalanisms in there.

Amador’s fascination with the discovery that there is a thing called central heating has a personal echo.

No writer incorporates such precise details without drawing them from personal experience. It is a pure class reaction taken from mine when I entered a bourgeois house in Eixample. I didn’t even know that the concept of central heating existed. The working class has many small steps that cannot be seen from the middle class and above, but which can be seen from within. I don’t exactly come from the world that Amador comes from, but my friends do and I feel like I know someone like Amador and his way of biting against being a rabble. Nobody wants to be a rabble. I write with hatred, I have no other engine. What I do have is the ability to transform that raw material into other things.

Are there people as violent as the one in ‘Revancha’?

Anyone who has seen violence in the first person, either on their face or around them, knows that it is. Used both immorally and horribly and justly and helpfully, there is a lot of violence. Because I have also seen violence applied in a useful way and it works. Words do not work against a bully, but violence that cannot be answered.

Let’s park ‘Rompepistas’, which annoys the theory: his last two novels, compared to the previous ones, have something of an escape from Barcelona and return to his native Sant Boi.

It has to do with being a self-taught writer. In a very simple way: at first I did not believe that you could talk about folklore and the peripheral working class roll in a novel. I had to make a detour. But also in my Barcelona novels there are at least small approaches to the primordial source, the volcano.

What attracts you literarily to Baix Llobregat, beyond being the ‘volcano’ in which it was forged?

Middle-class urban life is overrepresented in the novel and always with very similar results, be it the French, American or Spanish novel. But then you go to a southern novel [del sur de EEUU] and there are some referents and some values ​​and a jargon that are unique and that the Americans, as good makers of myths, have turned into genre [la grit lit o el hilbilly noir]. It is a world just as rich and novel, but rare. My novels speak of a world that for literary purposes almost does not exist, of a periphery that also has a very clear landscape.

With the Castelldefels highway as the axis.

The highway, the campsites, the Llobregat delta … It is an area full of ghosts, something that was reasonably cool and not anymore. You would have to go to Victorian Gothic to find a place as daunting and at the same time disturbing as the closed campsites of the Baix. In some they have built on top but in others they have not, so they are exactly the same as the day the last caravan left. They walled up four things so they weren’t crack houses, but if someone were to sneak into one, they would have the feeling of having entered Planet of the Apes.

You like to talk about literature as a trade. How do you master this trade?

Mastering a trade is great and it costs a lot. A huge part of writing is a fight against natural tendencies. First, against the urge to explain things quickly, without circling. But you like the narrative and you have to go around the corner, just as someone who tells fucking jokes will never go straight to the end. Another fight is against overexpilation. If you start to see that you write in an attractive way, you tend to go overboard with the images, the explanations, the metaphors, the opinion … Is it true that if you pamper a child they will be an idiot? Well, if you pamper a book and each little phrase seems essential to you and you allow it everything, it will become a shit book. Against self-infatuation there is only one remedy: a constant effort at self-publishing. And a flattering environment is death.

A simile of that austerity in modern popular music?

In pop music it is much more difficult to do two and a half minutes of perfection than to do fifteen minutes of jerking. The natural tendency is to jerk off. The unnatural thing is to compress and remove all the jerking. Then you get a tight book like Revenge.