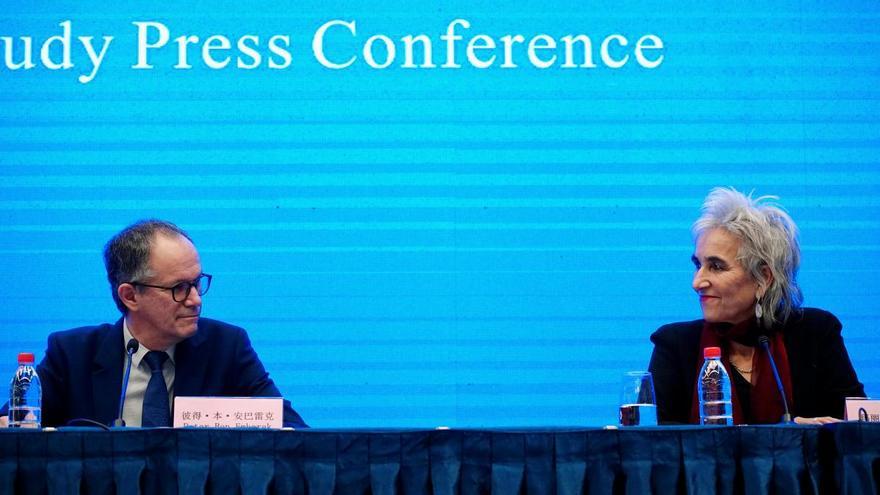 The WHO mission in China to search for the origin of SARS-CoV-2 has produced its first results. Two members of the international team transferred to Wuhan and two others from the Chinese delegation have appeared from the city where the first case of coronavirus was identified in December 2019. Peter Ben Embarek, WHO expert on animal diseases and food safety and Marion Koopmans , a virologist, have spoken on behalf of the 17 foreign researchers who have already been in the country for a month, since they landed on January 13 and were quarantined for two weeks in a hotel.

“Has the image we started from dramatically changed? I doubt it. Has it allowed us to know a little better how it all started? Absolutely,” Embarek said during his turn to speak. On the side of China, the head of the investigation Liang Wannian has emphasized at all times the attitude of collaboration of his country with the WHO before advancing the first conclusions.

No clues from the animal host, which is not the bat

Although they started from the evidence that the coronavirus is a zoonosis, an infectious disease of animal origin, Liang said they have not yet found the host species. There is no evidence that the bat or pangolin transmitted SARS CoV-2 from the samples they have analyzed. Similarly, the high susceptibility of cats and mink suggests that there are other animals that can act as reservoirs, but research in this field is still ongoing.

For its part, Embarek has confirmed that they have mapped the activity of all the stalls that were in December 2019, reaching Chinese farms, but also external sellers. In addition, starting from the hypothesis that the original host is a wild animal, the scientist has asked to take into account the “complicated routes” that they can take “even across borders.”

The Wuhan market was not the origin

Another of the great advances of this two-way investigation has been the discovery that there are no previous coronavirus samples at the end of 2019, when they were already identified in Wuhan. All the signs led to the Huanan market as the main focus of the disease, but Liang has revealed that samples have been found in other markets and other parts of the city simultaneously. Also cases in which no type of market was related. Therefore, it can be assured that there was community transmission in Huanan, but not that it is the origin of all the first infections in China.

On the other hand, the researchers found infected samples on various surfaces in the market, which led them to wonder how the virus first entered that space. WHO experts have resorted to four hypotheses to answer this question.

The four hypotheses of the WHO

Peter Ben Embarek has given the four hypotheses from which his team started and which they have refuted or confirmed with scientific arguments at this time. The first, that the coronavirus jumped directly from the original animal host to the human; the second, that there was an intermediate species that was closer to the population that served as the second reservoir; third, it had to do with frozen food and animal products sold in Chinese markets; and finally, that it was an accidental escape from a laboratory.

To the tranquility of many, the last hypothesis has been practically discarded and in fact it will not be used in further studies. The one that the Chinese and WHO experts consider the most is that of the intermediary animal, but in their next investigations they will closely follow the other two possible routes of transmission to the human body.