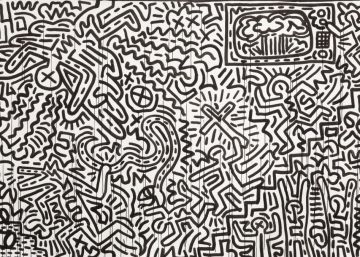 Imagining a language means imagining a way of life. Did Keith Haring in New York, in the eighties. A decade, until his death in 1990, in which he acted without pause, anywhere and in full view of everyone. Three virtues that sublime art contemplates as perversions of authentic creation, which is done without haste, on canvas and in secret. The commandments dictate that without oil there is no glory or posterity. Haring lived art with the urgency of what is going to disappear. As fragile as a graffiti on the wall, as strong as a rebellion. TO Roy Lichtenstein It seemed to him that Haring had an enormous talent for composing on the fly writing that he improvised and did not correct. “I guess Keith looked at our pop art, our cartoon figures and realized that they could be art,” said one of the parents of pop, whose origins date back to Abstract Expressionism. Haring, no: it was the net pop relay, he had sucked the graffiti and television as a form of irremediable and natural expression, although he never became a graphite writer. He was not a rebound from the intelligentsia, nor disappointed with existential angst. It was pure life without distillation from Reading, Pennsylvania, where almost a quarter of the population lives below the poverty line.

Keith was a showman“Tenderly finished Lichtenstein, who saw in the young man the culmination of his project of fame in New York. In part he was right: people saw him work with his chalk on the subway signs and Tseng Kwong Chi followed him and photographed him while executing the drawings. It was one performanceIt was more than just fame. As Álex Vicente recently wrote in these pages, Haring adopted “the graphic codes of the capitalist world to inoculate in it ideas capable of destroying its white and heterosexual dogma. Every dollar spent on derived products that reuse the motifs of his works is a victory for his cause. ” Haring’s imagined language was the disobedient expression of a dictionary against docility. And one of his best examples is on the bathroom walls The Center: Lesbian, Gay, Bisexual & Transgender Community Center, in Manhattan, where in 1989 he painted a mural to celebrate the twentieth anniversary of the stonewall riots, considered the beginning of the movement for Gay Liberation and LGBT Rights. He MoMA of New York conserves a huge paper mural, from 1982, divided into two parts and with an extension that exceeds 17 meters in length.

Jeffrey Deitch, gallery owner, wrote in 1982 that “Haring has never had to wait for someone to volunteer to organize an exhibition. His art emerges directly when he is ready and invades the streets. ” I had the subway. Haring finds in cars the golden age of graffiti and “an incredible cartoon pop sensitivity”, which came from kids who grew up watching cartoons and with “a concept of color learned on television.” Haring also violated all the mandates of the graffiti when he took out his chalks and acted on the advertising of the stops without hiding. With chalk he drew a new way of life, it was the perfect weapon of insubordination.