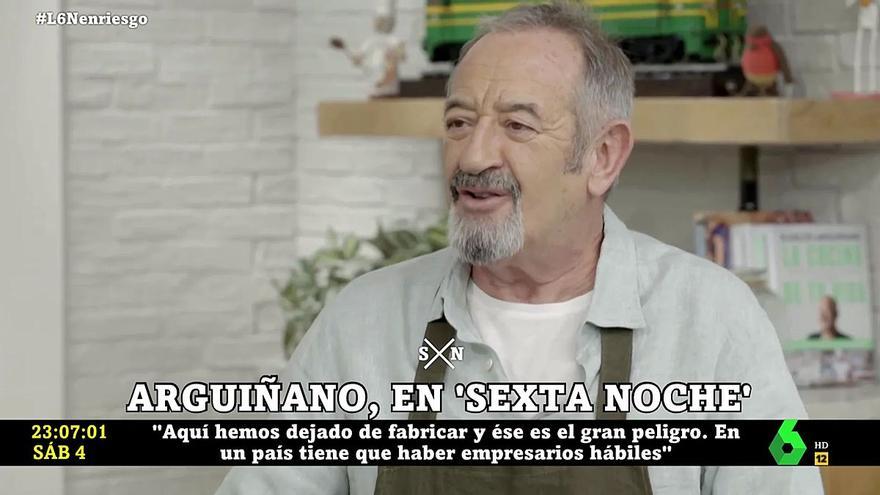 Jose Yélamo He traveled this Saturday to the kitchen of Karlos Arguiñano. During the interview, the popular cook did not hesitate to answer questions about politics, a subject on which he has been wet on many occasions. In addition, the presenter of ‘the sixth evening’ It reminded him of some statements he had made on his television show. Antenna 3, in which he claimed that it had always been “garish red.”

“I come from a workers’ town,” Arguiñano began by explaining to contextualize his origins: “I come from that world, from the working-class world. From welding, the chisel and the hammer. That has not been taken away from me.” “In the end I became an entrepreneur, but I have the little red dot that I had when I was 16 years old”, he acknowledged.

“We argued a lot. He was in the Blue Division, I denied the holocaust. Yelling at me, of course “, he revealed in the space of laSexta. However, Arguiñano wanted to make it clear that he does not deny him:” He was a super guy, but for me he was wrong. ”

Regarding the current political situation, the presenter is clear: “I don’t see them coming together for the common good, they come together for their own good.” “They have not joined even in the pandemic. I would change all the politicians, and let other young people come.”, assured Arguiñano, who despite everything, understands that “governing” is not easy: “If it is difficult to take things from home, how are you going to take things from a country?”