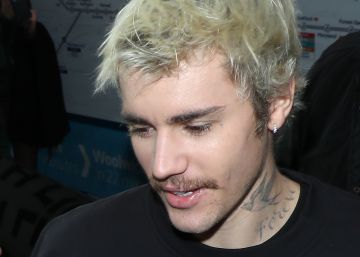 TO Justin Bieber He has already got a mustache. It is a pyramidal mustache, halfway between the modern and the vintage very now. It does not become a classic pencil or English or French, much less revolutionary, but it is enough mustache to be the sensation between beliebers -the huge army of musician fans- and perhaps something more important: to reflect the substantial change the pop star is looking for, which stopped his career dry three years ago due to faintness of fame.

At 25, Bieber wants to enter the adult world. Not only for the mustache, but also for a record return that speaks for itself. The new album, which is published today, is called Changes. Changes, not only aesthetic, leaving behind the imberbe child, but also artistic: his new album, the first in five years, is a qualitative leap by Bieber towards the first division of pop.

With his glittering new mustache and his dyed blond head, Bieber introduced Changes last Wednesday in London. In a meeting before the European press, security measures forced the attendees to leave the requisitioned mobiles at the door while the beliebers They were waiting around Tape London, a high-class nightclub, specializing in rhythm and blues and decorated with stars of fame, Hollywood style. The names of Kendrick Lamar, Kanye West, Beyonce or Drake could be read on the floor of their hallways, but not Justin Bieber’s. Nor did it matter when this musician, which according to the newspaper The Observer It has more influence on social networks than Barack Obama or the Dalai Lama, made an appearance.

Bieber appeared with a sweatshirt and dragging his feet as he walked, like those rap figures in which he now fixes what was once a teenage idol, a golden lad who, sponsored by the musician Usher, reached the top of the charts with Your sweet pop and without being of age. It is the same roof that is now marked with Changes, only, in his own words, making the music he “truly” loves. R’n’B Very environmental and Anglo-Saxon with rap dyes. Somehow, Bieber is still addressing his audience: the children who had him at all hours on his home televisions are now in the nightclubs. And it is the territory of the night in which it moves Changes With his danceable spirit.

To do this, as I already saw in his previous and irregular work Purpose, published in 2015, and before disappearing for three years, it is surrounded by a lot of talent from the rich North American scene. In Changes It has several producers, including Josh Gudwin, who usually works with Dua Lipa, or Poor Bear Boyd, his faithful squire with whom already started this transit in singles how Where Are Ü Now, What Do You Mean? or the remix from Slowly. In addition, if before he allied himself with Diplo or Skrillex, he now adds the collaborations of large firms such as Travis Scott, Lil Licky, Kehlani and Quavo, half of Migos, who accompanies him in Intentions, one of the advance songs in which in just one month has reached more than 160 million views on YouTube.

“I feel super good,” said a smiling Bieber, who was playing his songs at the top of the cabin as if he were a dj. He danced, rubbed his hands, winked his eyes, raised thumbs in approval as he crossed glances with the audience and sang his own lyrics. The presentation seemed like a karaoke of Bieber himself, something that was more bearable than when he began to evangelize the importance of God in life or love. At 25, Bieber, overcome his break with Selena Gomez who came to mistreat psychologically, has married model Hailey Baldwin, daughter of actor Alec Baldwin. Between song and song, he blessed all those who have a partner with a speech that seemed well out of one of his youngest teenage themes.

Today Bieber, who is uploading documentaries about his own life on his social networks, seems confident, having disappeared from the map for three years. He ended up burned from his status as a teenage star: he starred in horror in the middle of performances and interviews, like the one he did in the 40’s studios, Y In 2017 he came to cancel the last 14 concerts of his world tour. He even revealed his drug addiction since he was 13 years old. He was on his way to becoming a Macaulay Culkin of music. A boy with a pretty face, devoured by success to the point of getting off the ship or sinking with it. However, now aim with Changes to a serious leap to the elite of R’n’B adult. It remains only to know if this Justin Bieber will be able to convince the world that he is much more than a spoiled child who has simply left a mustache.

"Culture is now more important than ever, it is a mistake to close theaters"

the exhibition that captures the places of sexist murders