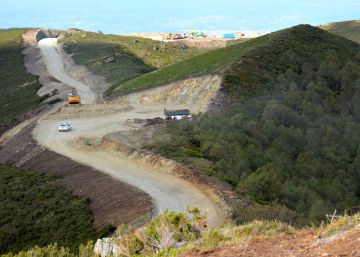 The judicial battle against the controversial wind farm of O Iribio, promoted by the Xunta in some mountains of Lugo of great natural value with an environmental permit from 14 years ago, has achieved its first victory. The Superior Court of Justice of Galicia has cautiously suspended the agreement of the popular government of Alberto Núñez Feijóo that authorized the complex and led to the start of the works. The order leaves without effect the resolution of last June 27 that approved the installation of the mills “as long as the declaration of environmental impact of the year 2005 is not updated and the prevalence of the use intended by the Xunta is justified when approving the industrial project ”.

Based on the opinion of the high court, the Save or Iribio Platform, composed of environmental and neighborhood groups and political parties, has submitted an application to the Department of Industry and the municipalities of Samos and Triacastela to order immediately stop the works in this area of ​​Red Natura in which endangered species such as the brown bear or the golden eagle are present. Although the order does not expressly mention this measure, the entity that leads the fight against the wind farm is clear that the suspension of work is the “logical consequence” of the judicial resolution. He argues that the administrative act that justice leaves without effect is the one that gave rise to all urban planning permits granted to Fergo Galicia Vento, SL to execute the project.

The wind farm developer is in a hurry to build it because the environmental authorization available to it falters. It was granted by the Government of Manuel Fraga in August 2005, when he was in office after the electoral victory of PSOE and BNG that ended 16 years of absolute majority of the PP in Galicia. The order just issued by the Superior Court admits that such an environmental impact statement "may be obsolete", as the neighborhood and environmental groups of Salvemos O Iribio argue. Fourteen years after the approval given by the Fraga Executive to the wind farm, many things have happened in the area that are not even mentioned in that resolution. And in addition the current Galician legislation prohibits these projects in Red Natura.

The Superior Court's own car lists what has happened since 2005 in this place that pilgrims admire as they travel the Camino de Santiago between Triacastela and Samos. In Galicia, the Natura Network Master Plan was approved, which “prohibits the installation of new wind farms” in these spaces. Or Iribio has an "outstanding wealth of cultural and ethnographic values", the resolution continues, and is "an important area for the conservation of endangered species included in the Galician catalog of vulnerable species such as Circus Pygargus [ash eaglet] or the Circus Cyaneus [pale eaglet] ”and“ recently with the presence of brown bear and golden eagle ”. “A wind farm could be incompatible with the conservation of such natural and cultural wealth, as well as with sustainable development,” notes the high court, which also emphasizes that the complex, which affects the Cultural Interest of the Camino de Santiago, has it has been modified since 2005 increasing the size of the blades of the wind turbines "with an important impact".

The court order also admits that the O Iribio wind farm "may be completely incompatible" with the Xunta's request for this mountain range to be declared a Biosphere Reserve, since it affects even a Camino Real, a historic route of Galicia's communication with the Plateau that endangers cultural elements of great value as mamoas.

Save O Iribio considers the work stoppage in this protected mountain range urgent because, he says, "irreparable" damages are being executed. According to this platform, the company is opening an access to the summits of O Iribio that was not foreseen in the project, modifying a forest road in Red Natura to fit the huge parts of the wind turbines. "It is clearing, cutting down trees and widening the road without authorization from [the Ministry of Environment]," warns the entity.

Quino, the creator of Mafalda, dies at 88