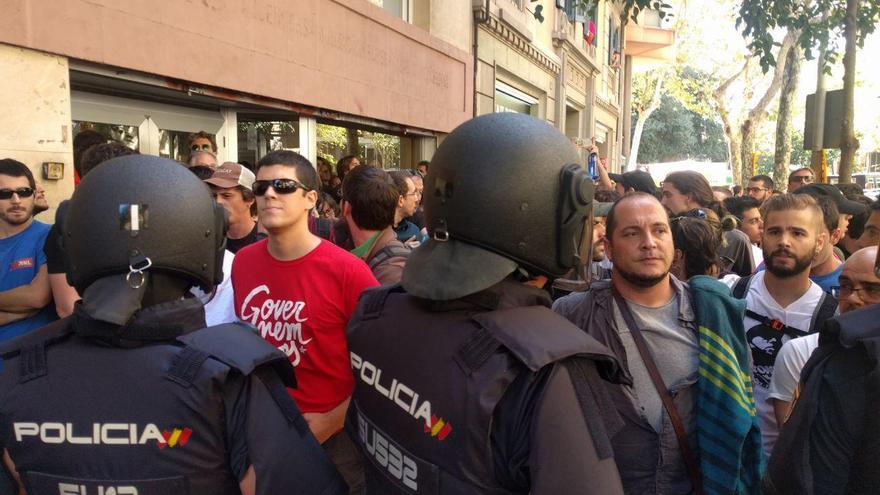 Definitive file to the judicial case for the deployment of dozens of riot control agents of the National Police without a judicial order in front of the headquarters of the CUP on September 20, 2017. The Barcelona Court has refused to reopen the case by ruling out that the police action was a “serious intimidation” or responded to a “desire to limit the freedom of movement” of workers and members of the training.

In a car, to which elDiario.es has had access, section 10 of the Audiencia de Barcelona dismisses the party’s appeal and confirms the file of the case ordered by the investigating judge. “We do not appreciate a disproportion between the inconveniences generated, the damage caused and the police activity, which was limited to an attitude of waiting and withdrawing from the door of the headquarters” of the CUP, the magistrates conclude.

The events took place on September 20, 2017. While the Civil Guard was registering dozens of headquarters of the Generalitat and companies in the framework of an operation against the referendum, plainclothes agents of the National Police who were guarding the headquarters of the CUP stopped two militants from the formation to seize posters of the party’s campaign in favor of ‘yes’ to the vote, suspended by the Constitutional Court.

The same section of the Audiencia de Barcelona had ordered the judge to reopen the case in January 2019 considering that he had not investigated sufficiently, which led to the accusation of the former chief of Information Commissioner of the Police in Barcelona, ​​Juan Manuel Quintela, as well as a person in charge of the Provincial Brigade of Foreigners. Once defendants and witnesses have declared, the judges maintain that the avenues of investigation have already been exhausted but that the case must be closed.

After a detailed chronological review of the events, the order argues why the police deployment does not constitute a crime of coercion as claimed by the CUP. The magistrates state that after seizing the 1-O propaganda, workers and militants of the CUP closed the headquarters in anticipation that the Police would try to enter the premises and that 20 minutes later “they observed a group of six or seven hooded agents outside the door and a line of riot police in front of it. ” At the same time, the concentration of people in front of the headquarters against the police presence grew.

Between 2pm. and at 8:00 p.m., the car continues, “no agent tried to enter the headquarters or reported that a search would be carried out”, since the police officers investigated were “waiting” to receive a response to the request they had sent to the Prosecutor’s Office, which never asked the judge to register the CUP headquarters. According to the agents, although it was a matter of seizing political propaganda, the action was covered by the order of the Prosecutor’s Office to prevent any activity related to the referendum.

Although the magistrates consider that the police action of “the first minutes”, when the hooded police officers and a line of riot police stood in front of the headquarters making entry and exit difficult, it can be “objectively intimidating”, the same is not the case with what happened all afternoon.

In this sense, the order rules out that the police operation “obeyed a malicious act to prevent the performance of the party’s ordinary activities” because “the police presence increased at the same time that the number of people” who attended the headquarters of the CUP in protest at the deployment of uniformed men.

From the moment in which “a crowd much larger than the number of police officers” gathered at the CUP headquarters, the judges remarked, “a coercive attitude of the police units can hardly be sustained.” “· The mere police presence and the reality of a multitude of people in the street – the resolution abounds – means that we cannot speak of disproportion in the intervention and of serious intimidation against working individuals, activists and supporters of the political party.