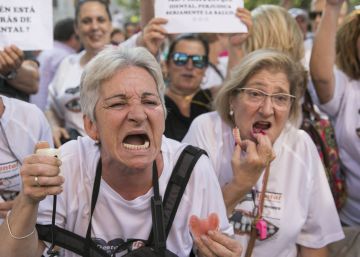 Justice begins to inflict the first blows to credit institutions dotted by the iDental case, the alleged macro-scheme created by the owners of this network of dental clinics, which closed its doors in 2018 without prior notice and left thousands of patients untreated. A court in Valladolid has just sentenced to pay 5,000 euros to one of these financiers, EVO, so that the affected patient can complete the defective treatment he received. This resolution is known just two weeks after Judge José de la Mata, who instructs the investigation at the National Court, met with the Ministry of Health to intensify measures against creditors that harass those affected So they pay their debts.

"We are very satisfied with the sentence because one of our main arguments has been admitted: that the financial companies must comply with the contract. Those affected by iDental have paid a treatment and the financial company must pay the amount to finish the contract, although, as is the case is higher than the amount financed, "says Afecade, the platform affected by medical malpractice that drove this case. As recognized by the court's resolution, dated October 31 and to which EL PAÍS has had access, once the "defective compliance" of the dental treatment has been proven and the prior claim against iDental has been unsatisfactory, the law authorizes consumer to "exercise against the lender the same rights you have against the provider."

This ruling opens the door to hope for many affected, who have repeatedly denounced how the network of clinics left them lying halfway. In fact a patient group concentrated last July before the Ministry to claim to help them complete them. "The Government tells us that it is using the budgets it has inherited from the PP and that, therefore, it cannot do anything until a new stable Executive is formed," said Benito Lupiañez, who presides over the association of those affected in Seville.

The iDental scandal broke out last year. At first, the simple closure of the network of clinics affected thousands of people - the autonomies came to calculate that the possible affected could amount to 400,000 throughout the country - who saw how their treatments were interrupted or not even started . But the effects of the closure were only the tip of the iceberg. Clients also began to report cases of malpractice, the use of poor quality materials and poorly made implants.

And Judge De la Mata broke into the scene. According to their research, the owners of iDental had built a complex network of societies to deceive patients, people with limited resources who were made to hire loans to finance their dental treatments. A money that, in addition, ended up in the coffers of the company and that later, according to the investigations of the National Police, was diverted to accounts controlled by the owners and was not intended to care for patients. The instruction is already in its final phase, according to the Ministry of Health after the meeting with the magistrate, who has already prosecuted those involved for a derivative of the cause: a 23 million euros fraud to Social Security.