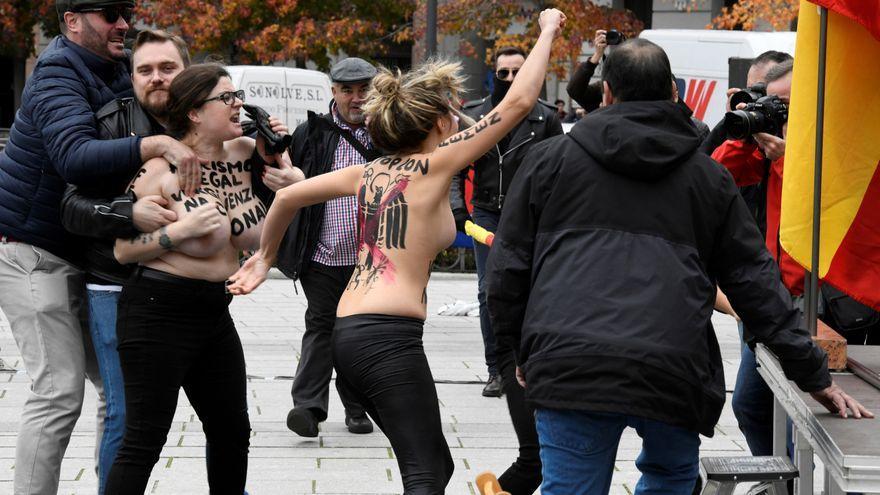 Justice has closed the open investigation against three Femen activists for boycotting an act of the Falange on November 18, 2018. The process was opened as a result of a complaint from the far-right organization in which it accused the activists of crimes of coercion, public disorder and against the exercise of fundamental rights. However, the judges of Section 17 of the Provincial Court of Madrid have issued an order, to which elDiario.es has had access, in which they do not appreciate any evidence of crime and therefore dictate the dismissal of the case.

The women stormed two years ago in an act called in the Plaza de Oriente in Madrid by the Association for the Abrogation of Historical Memory on the occasion of the 20th anniversary of Franco’s death. The three of Femen climbed onto one of the stages with the slogan “Illegal fascism, national shame” painted on their naked torso and had to be evacuated by the Police to guarantee their safety in the face of attacks by those present.

During the action, the members of the feminist collective were tackled, kicked, spat on and insulted. The images of the harassment went around the world, but they are not mentioned in the sentence since they never filed a complaint. Femen has always defended that the protest was “peaceful” against what the extreme right accused them.

After Falange’s complaint, the investigating judge and the Prosecutor’s Office saw a crime of mild coercion. However, the judges of the Provincial Court point out that this crime requires a violent action against a natural person, not against a legal person (Falange), as the one who files the complaint. “The legal person cannot suffer an attack against their moral integrity (…) nor fear or fear of suffering harm caused by the announced physical violence,” the sentence reads. The Falange has not identified any of those allegedly affected: “It is impossible to prosecute some facts of which we do not know the possible victims.”

The defense of the activists sees in the closing of the case “a new triumph of freedom of expression in the courts before Francoist groups that intend to criminalize any political position that is against their positions.”

A boycott with international visibility

According to one of the activists in an interview with elDiario.es, this was an action that the Femen group had been planning for years. “We wanted to make visible that in Spain demonstrations are still allowed in which Francoism is exalted”, Palmira explained to the journalist Marta Borraz.