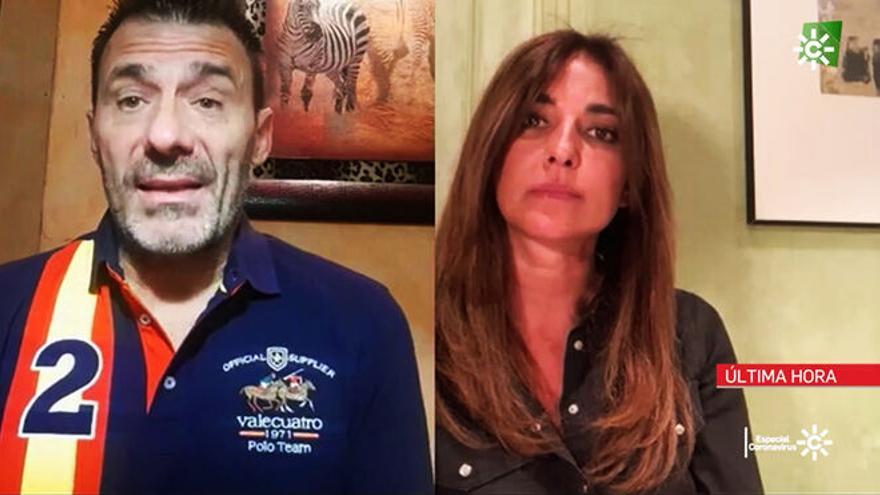 The Justice has confirmed a two-month sanction to the sub-inspector of the National Police close to vox, Alfredo Perdiguero, for assuring on television that in 2020 the Government Delegation in Madrid gave an order to ban the Spanish flag in a demonstration. The Superior Court of Madrid endorses the sanction for serious misconduct imposed by the General Directorate of the National Police and reproaches him for going to Andalusian regional television without asking permission from his superiors, to criticize an alleged order whose veracity he never verified and for saying that he represented a police union when it was not true.

His spokesperson profile has resulted, in recent years, in numerous appearances in the media as well as extensive activity on social networks and, in particular, through your twitter profile, where today it accumulates almost 50,000 followers. In recent years he has made numerous statements, on many occasions in media close to the extreme right, linking crime with immigration and with unaccompanied minors, questioning false accusation figures of sexist violence or against feminism. It has also spread various hoaxes on the pandemic and disseminated, among other things, audios of the then minor victim of the 'Arandina case'.

At the time, Perdiguero also made the leap to regional politics in Madrid. It was in 2015 when Ciudadanos studied including him on the list led by Ignacio Aguado for the regional elections that year, but the orange party decided to do without him. Shortly after, he went to Vox with the aim of being part of the lists and attended the elections as number 5 of the list headed by Santiago Abascal and who did not get representation in the Madrid Assembly. Four years later, he repeated as a far-right candidate with Vox in 16th place on Rocío Monasterio's list for the 2019 regional elections. Then he did not win a seat in the Assembly either.

Throughout these years, his public statements have cost him more than one disciplinary problem within the National Police. One of those files comes by threaten a neighbor of Lavapiés who contradicted him. Furthermore, as explained elDiario.es a year ago, the Disciplinary Regime Unit of the National Police proposed three sanctions for three serious offenses against him: for broadcasting a video of packages of folios but implying that it was sanitary material transferred to France in the worst of the first wave, for calling then Vice President Pablo Iglesias "the one with the bow tie" and insulting the also multi-file police officer Alexander 'Jandro Lion' Leon and, finally, for an intervention in Canal Sur in May 2020.

This last sanction of two months of suspension for serious misconduct is the one that has been examined by the Superior Court of Justice of Madrid. In May 2020, the sub-inspector participated in a Canal Sur program and referred to a demonstration called in Madrid and not authorized for the 2nd of that month with a caravan of cars. "The order is from the Government Delegation that prohibits this demonstration in vehicles and prohibits carrying the Spanish flag, kick it out, prohibit the Spanish flag in Spain," Perdiguero said in his speech.

Those days, in which demonstrations against the Government were called from The phalanx or by the agitator of the extreme right Luis 'Alvise' Perez, social networks and WhatsApp were filled with audios of citizens who, supposedly, had been fined for carrying the Spanish flag, a fact that does not entail and has never entailed an administrative offense subject to a fine. Throughout the processing of this file, as reflected by the Justice, Perdiguero acknowledged that he had accepted a service order from the Government Delegation that, he said, "he did not know about."

The Superior Court of Justice of Madrid, as elDiario.es has learned, has just confirmed the sanction of 60 days of suspension for these statements as they constitute a serious offense for "infringement of duties and legal obligations inherent to the position or to the police function, when it occurs seriously and manifestly". The judges endorse the General Directorate of the Police and condemn the fact that the sub-inspector appeared on television without representing a union, without having permission from his superiors and criticizing the Madrid Government Delegation with an accusation, moreover, without any solid evidence behind .

The sub-inspector alleged, among other things, that he appeared on Andalusian regional television "as a citizen and as a union representative" and that therefore this sanction violated his freedom of expression. Also that there had been irregularities in the processing times of the file and that several pieces of evidence that he had requested to defend himself during the investigation of his sanctioning process had been rejected. All the allegations are rejected by the contentious chamber of the Superior Court of Madrid with the approval of the Public Prosecutor's Office and the State Attorney's Office.

The judges reject, first of all, that he intervened as a spokesperson for a union or to talk about something that has to do with the working conditions of the agents. "He does not intervene as a union representative, he does not speak on behalf of his Union, whose name is not mentioned. On the screen he appears identified as a Deputy Inspector of the National Police," the sentence highlights. His statements, according to the sentence, also had nothing to do with police unionism: "These had nothing to do with the unions or with the working conditions of the national police officers. The actor was not disclosing news of union and social interest. He was criticizing instructions given by the Government Delegation in Madrid in matters of public order", he ditches.

The freedom of expression of an active police officer, recalls the TSJM, is not the same as that of any other citizen. "The limits imposed on public officials derive from their subjection to the principles of neutrality and impartiality, and from the protection of other constitutionally protected interests such as the safeguarding of public security order," say the judges. His statements questioning a political intention of the Government Delegation, they continue, were not protected by freedom of expression, even less when analyzing the circumstances of the case: "We understand that the principle of neutrality required of officials in general and members of the police in particular, as well as the very serious public health crisis in the context of which the plaintiff's statements were framed, determine that the plaintiff's right to freedom of expression, in his public demonstrations as sub-inspector of the National Police" did not allow his statements to be protected in that right to express themselves freely.