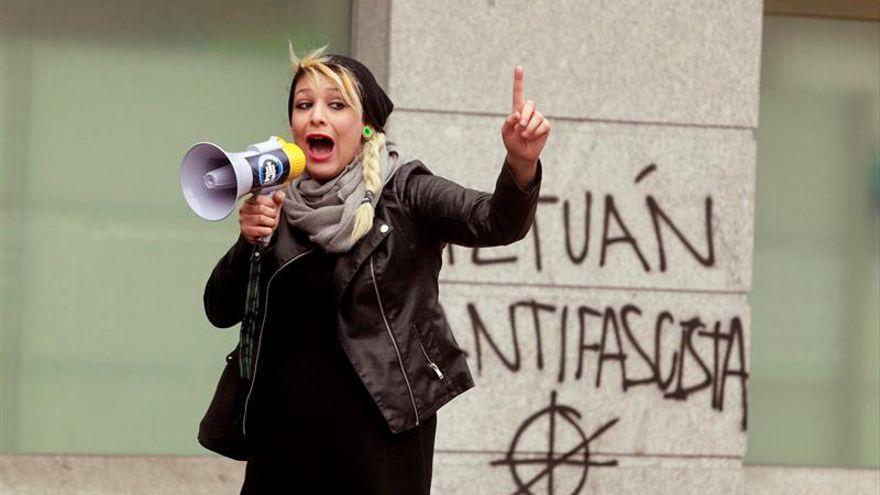 Justice has sentenced the leader of the Social Home, Melisa Domínguez, for a crime of serious disobedience to agents of the authority to pay a fine of 630 euros. The magistrate considers it proven that the defendant and the JFR and CMM also investigated refused to provide their ID when the police officers urged them to do so on August 30. “We are not doing anything. We do not have to identify ourselves, this is private property,” alleged the defendants, according to the sentence to which this wording has agreed. The events took place in a building owned by Radio Televisión Española (RTVE), located on Joaquín Costa street in the capital, one of the buildings that the far-right organization has occupied in recent months.

The association published on their profiles in social networks on August 29 that were once again occupying the old headquarters of the NO-DO (Franco’s Documentary Newsletter), owned by RTVE. A building that they already knew because they had occupied it five years ago. A National Police patrol approached to “identify the people” who were in the public facilities in case they were committing “some kind of infraction” and “in case the security of the Israeli Embassy [que se encuentra a escasos metros] could be compromised “, includes the sentence issued on October 29 by the criminal court number 27 of Madrid.

Faced with the police operation, “the defendants identified themselves as members of the Social Home association through the exterior gate of the building and their identification was requested, due to unauthorized occupation of a building, refusing to do so” repeatedly, continues the judgment.

The condemned came to reject the order given by the Police on more than 15 occasions. JFR recorded the police action with his mobile phone and the agents arrested him by refusing to identify himself and did not stop recording. At the court hearing, Domínguez alleged that he did not identify himself because they were “on private property” and, in his particular case, because “he did not carry the documentation.”

The facts have been judged in a quick hearing that was held one day before the sentence was handed down and in which the accusation was exercised by the Prosecutor’s Office. The Public Ministry requested that the accused be convicted of a crime of serious disobedience, as determined by the magistrate, although it did propose a higher fine, which amounted to 1,620 euros. For its part, the defense of the accused requested the acquittal of their clients.

“In the case at hand, it is inferred that we are faced with a serious disobedience due to refusal to comply with the mandate to identify oneself [de forma] reiterated, because the agents maintained that the defendants refused to do so after asking them to do so more than fifteen times, then in application of the jurisprudential doctrine, the defendants cannot be considered the authors of an administrative offense, but rather of a crime of serious disobedience to the authority of which they are accused “, argues the judge.

Finally, the magistrate concludes that “the conduct of the accused deserves the consideration of a crime of serious disobedience” due to the insistence with which they refused to provide their documentation. The ruling has already been appealed before the Provincial Court, according to sources from the Superior Court of Justice of Madrid.

This is one of the first sentences handed down against Domínguez. In a few weeks, the leader of Hogar Social will be tried again. This time, charged with a crime of incitement to hatred for the attack on the M-30 mosque on March 22, 2016 after the jihadist attacks in Brussels. He has also decreed an oral trial for his action in one of the caceroladas against the Government called on Ferraz Street in May 2020, when he again refused to identify himself. And it has another cause open for a protest held in January 2020 in front of the PSOE headquarters.