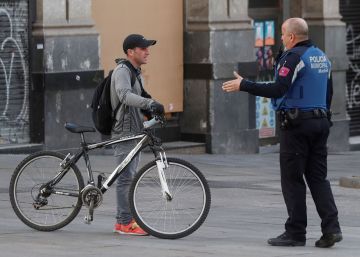 Among the measures adopted by health administrations to stop the escalation of coronavirus infections, there is one that has recently raised some controversy. Last week the Ministry of Health of Aragon authorized the communication of lists of sick or suspected covid to the State security forces and bodies and local police to verify if they are complying with isolations or quarantines.

The problem, as the order implicitly recognizes, is the lack of means to control citizens rebels. The reports of some cases of positives who were on the street bypassing the confinement have shown that the telephone monitoring system is not enough. In order to involve the police in this search and verify that those affected do not leave home, the rule supports that the regional health administration share this information with them.

However, data protection experts do not agree on the legality of the measure. While some lawyers state that it is sufficiently substantiated, others miss a rule with the force of law that, in general, sets the assumptions and conditions so that the authorities can transfer this sensitive information.

On the other hand, there are also doubts about what the role of the State security forces and bodies should be in controlling offenders. Can you stop someone who skips the quarantine as happened with a surfer from San Sebastián who, a few days ago, ignored the Ertzaintza’s requirements to get out of the water? Should your work be limited to communicating non-compliance to Health or the judge? These are all, experts warn, questions that do not have a simple answer.

Is it a legal measure?

The Aragonese health order justifies this decision by the need to guarantee the effectiveness of the isolations or quarantines imposed. According to it, the communication of these lists to other authorities even without the consent of those affected is allowed both by health legislation and by data protection regulations.

This is the opinion of Ricard Martínez, director of the Chair of Privacy and Digital Transformation at the University of Valencia. According to the lawyer, the decision of the Aragonese government is foreseen for exceptional situations such as the current one. Both the General Law of Public Health and its Aragonese counterpart, states, guarantee that the health authorities adopt the measures they consider necessary (specifically, the request for help from other authorities) to protect public health in case of “urgent need” or “imminent and extraordinary” risk. In addition, it adds, Organic Law 3/1986 on special measures in public health, authorizes them to make the decisions they deem appropriate for the “control of the sick” in the event of a possible transmission. It is, therefore, for Martínez, a legal and legitimate measure. “We must attend to the risks that are intended to be covered and, from that prism, evaluate the whole,” he says.

However, these same legal bases are insufficient for Iñaki Pariente, former director of the Basque Agency for Data Protection and now a partner at Dayntic Legal. The lawyer warns about the danger posed by legislation that does not clearly specify what are the measures that health authorities can adopt even in cases as exceptional as the coronavirus pandemic. Any action, he argues, would be covered because it is only required that they be “adequate and proportional”, a highly interpretable concept.

For the jurist, “not everything goes” and demands a legal reform that limits these extraordinary decisions. It has moved, it objects, from the request for a judicial authorization to the taking of restrictive and invasive measures through “an order from the health minister.” The very imposition of confinement is an administrative decision that creates some “legal doubts”. Until now, he insists, in order to isolate or necessarily lead a contagious patient to a hospital (as in some cases of tuberculosis), an authorization was requested from the judge.

An argument rejected by Martínez, who clarifies that the imposition by force of confinement does require, as recognized by the Aragonese rule, judicial intervention. He agrees with Pariente on the need for legal coverage, but understands that the existing one is sufficient to request the collaboration of the State security forces and bodies “for verification and control purposes, never coercive.”

Authorization with the force of law

The experts consulted also differ on whether sharing the list of inmates with the police violates their right to protect their data, taking into account that it is especially sensitive information because it is linked to health issues. The Aragonese order itself recalls that according to one of the decree laws approved by the Government to fight against the pandemic, there is an obligation to provide the health authority with “all the data necessary for the monitoring and epidemiological surveillance of Covid-19 that are required of it. ”.

For Martínez, both the General Data Protection Regulation (RGPD) and the organic law approved in 2018 admit this assumption. Specifically, he points out, there is an exception to the prohibition of the processing of this information in the public interest for “protection against serious cross-border threats to health.” If it is taken into account that, in origin, the treatment of these data for health is legitimate, explains the lawyer, that the law allows police assistance, and that it is a measure designed to verify that the quarantines issued for Containing the spread of the virus and protecting the lives of those who could be infected is a lawful measure. A faster system than going to the judge “when gathering evidence of a breach”.

On the other hand, Iñaki Pariente objects that the organic data protection law expressly requires that the transfer be based on a norm with the force of law. Obviously, he explains, it is not possible to consult one by one if he agrees with the communication of this information, which includes information about his whereabouts. But, he insists, it cannot be justified only in the preservation of public health if there is not “a clear legal protection in the health legislation.” In addition, he adds, there may be problems when it comes to guaranteeing the confidentiality of the data. In any case, she points out, citizens could report to the Spanish Agency for Data Protection, which can also investigate ex officio.

The criminal lawyer José María de Pablo is clear about it “by simply skipping the quarantine, a person cannot be detained, because that conduct, in itself, is not a crime.” Another issue, points out the partner of the Mas y Calvet law firm, “is that the police can identify that person and report them so that an administrative sanction may be imposed.”

The arrest can only occur, he explains, if the breach of quarantine is accompanied by other behaviors that may be criminal, “such as disobedience, resistance, or even the attack on an agent of authority.” But for us to speak of disobedience, he stresses, a prior “direct and final order, directed by the authority or its agents towards a specific person” is necessary. For this reason, “simply breaking a law is not a crime of disobedience,” he says.

The lawyer also rejects that these behaviors can be considered a crime against public health. The information that circulates in this regard, he stresses, “is very wrong.” Crimes against public health (provided for in articles 359 to 378 of the Penal Code) refer primarily to drug trafficking and prohibited drugs and substances. “Relate this crime to the pandemic, however widespread it may be, is still an urban legend,” he concludes.

What, then, are the actions that the State security forces and bodies can carry out? In a situation as serious as the current one, says Pablo, it is possible to establish some control measure, but provided that the right to privacy of those affected is respected. The police could not, for example, monitor the entry into the home of inmates in such a way as to “interfere with their private life”. In the same way that controls are established on the roads to control compliance with traffic regulations, he believes, “some type of non-invasive control would be possible, always on public roads, and respectful of the right to privacy, to guarantee the compliance with a quarantine ”.