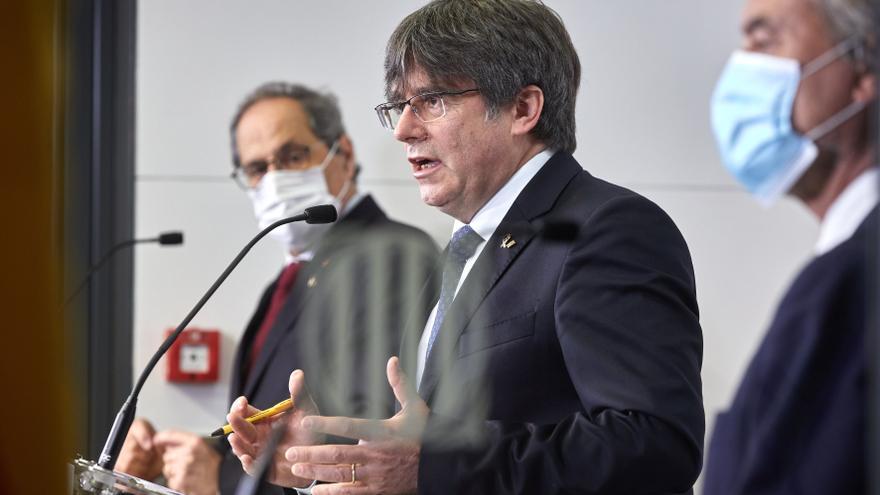 The Junts per Catalunya primary regulation does not prevent Carles Puigdemont from ending up as number one on the list. This is what the direction of the formation believes, which this Monday has opened the door, through the mouth of the spokesperson Elsa Artadi, for the former president to lead the electoral candidacy for Barcelona despite not having attended the internal selection process. As stated by the spokesperson, the regulations of the primaries allow the National Executive of the party to propose a number one for Barcelona different from the candidate for the presidency and even if they have not undergone the primary process.

“The regulation does not assume anything about who should be number one in Barcelona,” Artadi assured at a press conference, giving oxygen to the option that Puigdemont ends up appearing as the headliner although without wanting to take for granted that it will be so. The spokeswoman has preferred not to advance what the role of the former identity will be, something that Puigdemont’s own environment prefers not to clarify yet. “It is not up to me to clarify what his decision is or to make hypotheses,” said Artadi, who nevertheless stressed his conviction that Puigdemont “will play and play hard” in the Catalan elections on February 14, as leader of the political space that is.

What the primary regulations dictate is not easy to interpret. The Junts selection process has two ballot boxes, one to choose the presidential candidate and the other to choose the first members of the list of the three constituencies. However, while the regulations for Lleida, Girona and Tarragona indicate that the names of the “first three places” must come from the ballot box, in the case of Barcelona it makes a caveat and says that the “eight immediately subsequent places are chosen. to the candidate “. The rest of the candidates are decided by the Executive of the party, who must propose it to the bases and they validate it.

As Artadi and the Junts management understand, this draft would allow the candidate for the presidency to occupy the number two position for Barcelona, ​​leaving the one to be proposed by the Executive. This is how they want Puigdemont to occupy the head of the cartel, if they so desire.

In the training they are waiting to know what is the final wish of the expresident regarding his participation in the lists. Last Wednesday the Junts leader issued a message to explain that he would not attend the elections as a candidate for the presidency but that, instead, he did plan to appear on the party’s ballot. With this decision, the now MEP certified his departure from the front line of Catalan internal politics and opened the way to the duel between Damià Calvet and Laura Borràs for leadership in the practice of the post-convergent space.

It is the two of them, Calvet and Borràs, in addition to the third candidate who has obtained the endorsements, Jordi Farrés, who they have been disputed since last week the race to become a candidate for the presidency. The vote to decide it will take place between November 28 and 29 and, from that moment, the process will be opened to decide the rest of the candidates who appear in the primaries, that is, the first three for Lleida, Girona and Tarragona and eight after the candidate for Barcelona.

So far Carles Puigdemont has only expressed his desire to participate in the list, but has never said that he is interested in presenting himself as number one. However, this option has gained possibilities since last week, when in his video message he declared that, although he would not be a candidate to occupy the first seat of the Government, he did not renounce “to lead the project.” However, the act of deputy in the Parliament and in the European Chamber are incompatible, which means that, despite being on the list, the former president has few options to become a Catalan deputy and, therefore, his participation in the candidacy de Junts might not go much beyond elections.