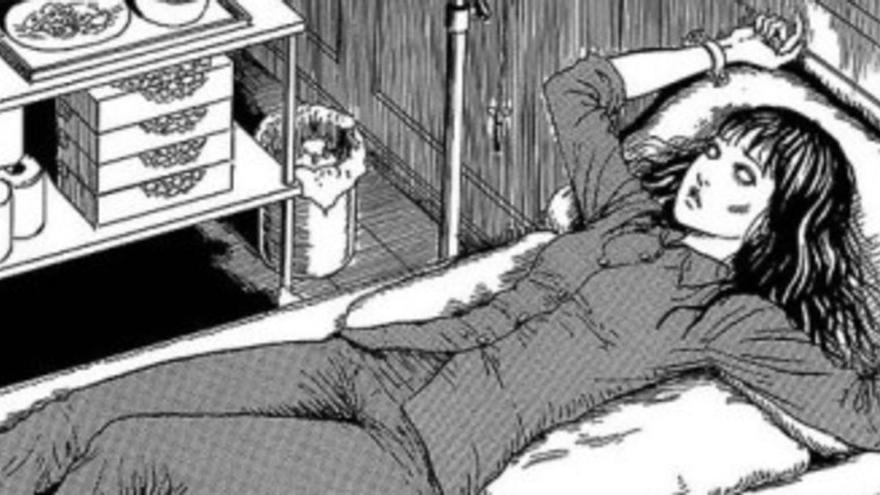 Probably no artist has been able to capture in such a subtle way how fragile and dark human nature is as the Japanese Junji Ito, author of the most beautiful and, at the same time, disturbing works in the history of art. And yes, I say art history because I am not limited only to comics, but here I also include painters who created such nightmarish images as Goya, Caravaggio or Pollock. The ability of the Japanese genius to capture human insecurities and vices in a way that is seldom so successful is always based on extreme situations of unbearable cosmic or ghostly terror in which young people come back to life after successively dying, spirits share their bitterness with the living with total naturalness or frustrated suicides wake up carrying precious stones from another world. There are parallels between Asian horror movies and comics. Because if we compare the work of the four geniuses of the cartoons -Shuehiro Mauro, Hideshi Hino, Umezz Kauro, Masaaki Nakayama and Junji Ito- with the production of the celluloid gold quartet -Hideo Nakata, Takashi Shimizu, Kiyoshi Kurosawa and Oxide Pang Chu – We see curious coincidences since in both cases the figure of the sinister girl with long hair is repeated that only partially reveals a demonic eye, the houses that harbor evil after their previous tenants die violently, or the remains of the body of a deceased that forces the subject to whom they were donated to act with the same sinister impulses as the deceased. But focusing on the immense production of Junji Ito, which is to the horror comic what Stephen King would be to the novel, we must establish several sections and summarize his work in 12 titles within a huge production that reaches a hundred. In the first place, there would be his three great masterpieces: Remina, star of hell; Tomie and Black paradox. The first would be, without a doubt, his most impressive work. The work deals with the discovery of an unknown planet that has crept into the solar system and that is approaching disturbingly to Earth, after absorbing all the stars that it catches in its path, and causing terror in a Tokyo immersed in the chaos. Before all this, the planet is baptized Remina after the daughter of the scientist who discovers her and the girl immediately becomes famous and attracts the attention of the media that makes her a celebrity. Soon after, when the planet becomes a threat, she is blamed for what happened and the crowds do everything possible to end her life. Here are the darkest and most disconcerting pages of the Japanese author since at one point in the plot the planet takes on a life of its own and plays with the Earth’s gravity at will like a child with a spinning top. The way crowds succumb to widespread hysteria is somewhat reminiscent of Bosch’s choral scenes of the Last Judgment in one of the most astonishingly original and puzzling titles made in this genre and with an ending as unpredictable as a master. The second most important work, and the most famous of Ito is Tomie. Here it is about a girl who, after dying on a high school excursion due to the negligence of the teachers and the practical jokes of the bullies on duty, her classmates hide her body so as not to face the tragedy. But she comes back to life to, with her radiant beauty, take revenge on all those who concocted the deception. The work transmits in the reader a sensation between hypnotic and dreamy in the face of the continuous deaths and returns to the life of the protagonist that strengthen her even more. Curiously, Tomie is one of Ito’s first works and his line, at first, is not as outstanding as in his later works, but as a whole it is another essential horror comic masterpiece.

The third most outstanding work of the Japanese author would be Black paradox, which is part of a group of adolescents who decide to commit suicide unsuccessfully. When they wake up from their coma, they all develop eczema through which they have the ability to bring some kind of pearls from another world that immediately acquire indescribable value. The work has all the essence of Ito with its tremendous and spectral vignettes in an argument that exposes the most extreme supernatural terror and where even the four protagonists, trapped by a vicious circle of death, fame, power and wealth, have outbursts of tender sentimentality .

In a second block of Ito’s works, there would be three other equally essential but which have achieved greater fame and critics have continually praised them. They would be Gyo, Uzumaki and Sôichi’s whimsical curses. In the first the action begins when some fish with legs invade Okinawa, Here Ito plays more with uncertainty and concentrates all his interest in the conception of a particular world, a stressful situation, and to seek the creation of an overwhelming and disconcerting atmosphere. about these beings that run around the earth.

The second most famous work of the Japanese creator, after Tomie, is perhaps Uzumaki. It is a town infected with spirals by a kind of curse that little by little begins to spread, not only affecting individuals but also the town itself and manifesting itself in grotesque events such as the transformation of people into snail hybrids, pregnant women begin to adopt habits of reproduction of mosquitoes and even their children are able to regenerate their umbilical cords and placentas to return to the womb of their mothers. On the other hand, The capricious curses of Sôichi, includes a collection of short stories that have as a central figure this sinister-looking child, who constantly chews nails and who maintains a continuous relationship with voodoo and the curses that he uses to martyrdom his relatives in a work with a result closer to black humor.

In a third block would be the works that group his short stories in which the cartoonist born in the Gifu Prefecture shows his talent in an overwhelming and convincing way. Three of the most prominent examples are Terrifying Tales (20 volumes), Fragments of Evil, and Voices in the Dark. They are all masterpieces of terror where some of his best stories are found with essential Ito titles such as The Adventures of the Ikizuri brothers in a line similar to that of Soichi, with a geek family but with more than sinister intentions; A slow separation, where the subject of the afterimage of deceased people appears for the first time, which will be repeated so much in their stories; Magami Nanakuze on manias, the sick craving for collecting and its fatal consequences, or Glycerides where a family shares the floor with a grill run by the father and in which the feeling of overwhelm, disgust and oppression, due to the accumulated fat of all sides, it becomes really unbearable.

And in a fourth and last block would be other key works, but in which the script has been created by another author. And here we must put in a prominent place the subtle and original approach that makes Mary Shelley’s Frankenstein. Because unlike all the adaptations of the famous monster that have been made, Ito focuses on the encounter that, at the end of the book, occurs between the beast and its creator. During the trip through the Arctic, Dr. Victor Frankenstein tells one of the sailors where he derived his ambition to imitate God by creating a human being by himself. With an unusual ability to reflect Victorian England in all its aspects, Ito bathes the story with moments of humanity that all versions known to date lack.

In Rasputin, the patriot, Ito is accompanied by the great Takashi Nagasaki, author of wonders such as Master Keaton or Billy bat to adapt the autobiographical work of Satô Masaru in a more academic way, drawing a parallel between the mad monk and Yûki Mamoru, his alter ego, an influential analyst at the Japanese Ministry of Foreign Affairs. And, finally, Unworthy of being human adapts the homonymous novel by Osamu Dazai, where the life of a socially alienated young man, and also the writer’s alter ego, is narrated in a terrifying descent into the abysses of human nature. One of the most interesting works done by Ito in a complex work of great dramatic charge that puzzles, as always, the reader.