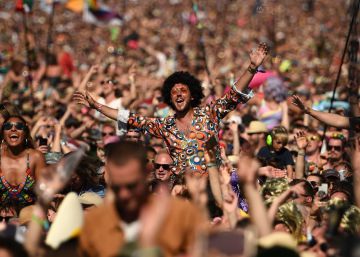 If life is normally a festival, in summer, life is a lot festivals. The high season of these appointments has already arrived and it does it in style, with eight important events on the first weekend of July. Galicia, Catalonia, Madrid or Andalusia, no matter the place, if not the reason, and it is none other than enjoying the best live music. In total, half a million people will go through Viveiro, Vilanova i la Geltrú, Caldas de Reis, Madrid or Torre del Mar, the most musical holiday destinations this week. Then, the great festivals that you can not miss in Spain from Wednesday 3 to Sunday 7 July:

The fourteenth edition of this Galician festival hopes to gather from July 3 to 6 100,000 people from 44 different countries in the town of Viveiro, Lugo. The organization plans to exceed 10 million euros in economic impact in the province and generate more than 600 direct jobs and 2,000 indirect jobs. The director of the event, Iván Méndez, has highlighted in the presentation of the Resurrection, that for the most multitudinous edition of the event's history, "the whole venue and the camping areas will be expanded".

More than 100 bands make up this year's poster, where they stand out Slipknot, Slayer, Parkway Drive, King Diamond, Within Temptation, Berri Txarrak, Lamb of God or Gojira, among others. Viveiro City Council cedes the land for the organization of the festival and makes available to users the free camping in Covas (with toilets, showers and buses) and the San Roque Viewpoint (which also has a large parking area ). In addition, this year, the viveirenses can attend half the price. General tickets can be purchased for 75 euros for the days of Thursday and Saturday, and 85 euros for Saturday. The welcome party on Wednesday is priced at 12 euros.

The sixth edition of the Torre del Mar festival, in Malaga, is being held on Wednesday with a welcome party on the festival site that will start at 6.30 pm and will feature renowned groups such as Mojinos Escozíos or La Pegatina. After this reception, the public can enjoy three days of live music and headliners as varied as Black Eyed Peas, Ozuna, Ska-P, Vetusta Morla or Nathy Peluso. A musical event that had 140,000 attendees in 2018 and is developed on the beachfront, the Poniente, with four stages arranged in 40,000 square meters.

The deputy mayor of the town, Jesús Pérez Atencia, pointed out the importance of Weekend Beach in the area: "in Torre del Mar it was always said that summer started from the fair, at the end of July, but with the consolidation of the festival in recent years, triples or quadruples the population in the first week of July. "For its part, Fátima Rodríguez, artistic director of the festival has specified that this year they have a budget of 3.6 million euros, "One of the most attractive events of the musical summer in Spain". The day tickets they are for sale for 50 and 55 euros according to the day, while the general subscription is worth 80 euros and for 5 euros more the assistants can enjoy the 25,000 meters of camping.

Caldas de Reis, in Pontevedra, hosts for the eighth year a new edition of Portamérica, a festival that mixes music and gastronomy. Precisely, this year has created an edible bracelet designed by Pepe Solla. He is the chef in charge of coordinating Repsol Guide Showrocking, a unique opportunity for the festival's public, who will be able to enjoy the tapas of 30 chefs -10 a day- with Soles Guía Repsol. All will elaborate gourmet pinchos created especially for the occasion and at popular prices, a very attractive menu that is combined with a quality musical program.

This year's poster will bring the Carballeira from more than 4,000 square meters to Rozalén, Zahara, Amaia, Andrés Calamaro, Carolina During or Sidecars. In 2018 it gathered 21,000 people and sold out tickets for the first time in its history. In addition, Portamérica stands out for its sustainable label, in this new edition that begins on Thursday, July 4, retakes the initiative 'One entry, one tree' in which the public can plant their own copy. On this occasion, the reusable glasses of the festival will also have life beyond the event, since each attendee will receive a native tree seed to germinate in its container. The subscription to attend costs 55 euros and day tickets are on sale for 30 euros.

From 4th to 6th July, great names will pass through the IFEMA-Feria de Madrid Bad Bunny, Stereo Bomb, Love of Lesbian, Jorge Drexler, The Sticker, Fatboy Slim or Fuel Fandango. All of them are part of the poster of the third edition of Rio Babel, a diverse proposal difficult to label that has chosen as its main motto: "Madrid dances". And it is that here, it does not matter the genre because they play almost all: electronic, indie, fusion, songwriter and an outstanding presence of Latin artists along with recognized national bands. The truth is that this festival is a pioneer in Latin music in Spain and since the first edition this has been one of the great bets of the event. For the organization, the only premise when it comes to programming is to find an interesting musical proposal.

The 20,000 people waiting to receive in Rio Babel 2019 can enjoy concerts and cuisine in a unique outdoor space. An event designed by music lovers and for those who seek entertainment away from the mass of other festivals, and who want to discover new artists. The day tickets can be purchased for 40 euros, 55 in case of acquiring the two-day pass and 75 if the pass is for three days.

The Life celebrates from this Thursday the sixth edition of a festival that in words of the own organization "is sea, is nature, is light and is art". This year it has a luxury musical poster led by Hot Chip, Jose Gonzalez, Beirut, Sharon Van Etten, Madness and The Charlatans. The event is celebrated among the pines that surround the Masía d'en Cabanyes of Vilanova i la Geltrú, in Barcelona. The festival, which organized its first edition in 2014, has achieved remarkable fame in less than a decade and last year reached 33,500 attendees, 4% more than in 2017, when the attendance figure was 32,000 people.

Since its premiere, it has generated different recycling actions and, this year, they propose that the organization and the public join forces to protect the Masia d'en Cabanyes park. The tool will be the glasses: the price of each will be 2 euros and, thanks to the fact that the cost of the same has been assumed by Estrella Damm and the organization, the total of the collection will go entirely to improve the natural environment of the space . The family is also one of the fundamental pillars of the festival, which puts at your disposal facilities adapted for children, such as the El Niu area and has even created a special pass for the youngest of the house. Adult day tickets can be purchased from 40 euros.

The tenth edition of the legendary Barcelona festival begins on Wednesday, July 2 with the performance of an authentic headliner as it is The Black Eyed Peas. The band is one of the highlights of an event that expects to receive 100,000 people until Saturday at the Parc del Fòrum. In total, the program has more than 40 performances among which international stars stand out as Kylie Minogue, Foals, Bastille, Zaz, Garbage or Years & Years. For the Cruïlla also will pass habitual national groups like Love of Lesbian, Vetusta Morla or Dorian.

In this way, 10 years after its first edition, this project is still betting on the opening of sights and genres, with groups ranging from pop to hip hop, rock or electronic music. Confirming that it is next to the Primavera Sound and Sónar, the third great festival bet of the city of Barcelona. Tickets to attend They cost 125 euros in the case of the payment of the two most requested days (Friday and Saturday), 75 euros if you only buy the ticket for one of these two days and 45 euros in the case of the entrance on Wednesday. The price of the ticket to access on Thursday is 25 euros. You can also buy a pass for three days (Wednesday, Friday and Saturday for 150 euros or Thursday, Friday and Saturday for 135) and four for 160 euros.

Carlos Tarque, Quique González, Sidecars, Melendi, Pablo López, Vanesa Martín or Ana Guerra they star in the eleventh edition of the festival Música en Grande de Torrelavega, in Cantabria. The party starts on Wednesday July 3 at the Campos de El Malecón and ends on Saturday July 6, hoping to gather the more than 40,000 spectators in 2018. The public can enjoy four nights with the best singers and composers of the national scene , who have managed to place their albums among the best sellers. Before the opening of doors, scheduled for 19.15, Música en Grande will have this year a special area outside the precinct that will open at 18,000 so that the public attending the festival enjoy a specific catering space, with drink bars and food trucks, and musical performances and other activities.

The festival has a budget of over 900,000 euros and will generate around 125 direct jobs. The organization of Música en Grande has established different types of tickets for each day of concerts, ranging from 10 euros on the track to 75 euros for VIP tickets. The stands and grandstand can be purchased from 15 euros and the premium ones are priced at 60 euros. In addition, there are five types of tickets depending on the location.

The sixth edition of the Rock Fest Barcelona will take place on the 4th, 5th, 6th and 7th of July 2019 at the Parc de Can Zam, in Santa Coloma de Gramenet. An edition extended to four days of which will be the continuation to a fifth anniversary that was the highlight of the festival and has had the support of 75,000 fans of rock and heavy metal from all over the world. This year ZZ Top, Def Leppard, Saxon, WASP, Europe or King Diamond they are the headliners of an event that will also have a national presence as Boikot, The Barons, Obus or Def with Two.

As every year, Rock Fest Barcelona is not only what happens in the main stages and the Rock Tent. Throughout the festival, attendees will be able to enjoy spaces and activities on the premises that complement the experience, such as the castle and the inflatable with the Motörhead Snaggletooth or the Motörtent and their rock karaoke. And for the first time, this year will have the presence of the Bustle Puppets, puppets of the heaviest, which will delight the little ones throughout the festival in different parts of the site. Tickets vary in price according to the day: Thursday and Saturday are worth 90 euros and Friday and Sunday 120 euros.