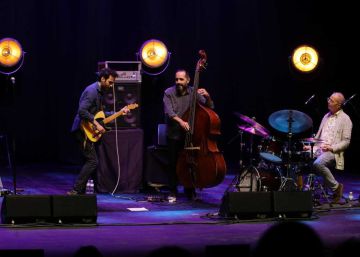 It was the recurring theme on the second day of the 43th International Jazz Festival of Getxo, and it is natural to think that it will remain so for a while: the change of the main stage of the festival is the real protagonist in this year's edition, with all due respect to all the musicians who act in it. A radical change, not because of the location (the new space is a minute away from the old one), but because the concept is completely different: from a square covered by a tent in the best summer tradition, with plastic chairs and people entering and going out in search of beer, sandwiches or anything else, we went to the solemnity of a dark auditorium, with seats and a first stage. The newly opened Muxikebarri, a building that houses three rooms of different capacity and numerous possibilities, will be from now on the framework of the festival, and although it is difficult not to miss the popular charm of the old square, with all its (numerous) defects, it is clear that the regulars Getxo Jazz they will have forgotten her before it seems.

The bonanzas of the new venue were more than demonstrated in the concert of the guitarist Julian Lage, a true compendium of contemporary jazz excellence. To say that Lage is the best guitarist in the world can be quite a daring, but listening to it live is difficult not to get up from the chair and affirm it categorically. As soon as the young American puts his hands on his guitar, one is inevitably caught by a whirlwind of energy and emotions that very few jazz players know how to generate live today. This was how it was lived in Getxo since the beginning of the concert, marked by the overwhelming version that Lage makes of the Love Hurts that gives title to his latest album. The song, written by Boudleaux Bryant and recorded by the Everly Brothers in 1960 (although it was Roy Orbison who first took it to the charts shortly after), becomes the guitarist's hands in a piece full of sensitivity, dynamics and personality, three of the characteristics that best define Lage's global proposal. This is not just his thing: as impressive as the richness of his language -with phrases ranging from the sinuous to the abrupt, the most jazzy to a twisted citation of his blues and country influences-, it is the magical form of communicate that the trio has, especially in the musical relationship between Lage and drummer Kenny Wollesen. This, one of the great names of the New York scene since the early nineties, has accompanied Lage for years, and shows an unusual connection with the guitarist. Along with Peruvian bass player Jorge Roeder, they make up a trio that has no equal in the current scene, not so much for its amazing ability to build and develop pieces, or for the genuine sense of personal joy that they transmit playing together, but because the same goes for play Ornette Coleman, Keith Jarrett or an original guitarist: everything sounds compact and personal, as if there were no other group on earth that could play that or, at least, that could play it that way, or have such a good time stage.

For this, perhaps, Lage seems the best guitarist in the world, and maybe it is, because his live is so magnetic that, in those 90 minutes of superb music, one forgets all the others: no one plays with such a mixture of class, ability and eloquence today. By the time he bid farewell to the getxotarra audience with his chilling version of the classic Crying of his beloved Roy Orbison, also included in his last album, Lage and his family had convinced those present: if he is not the best guitarist in the world, of course it seems.