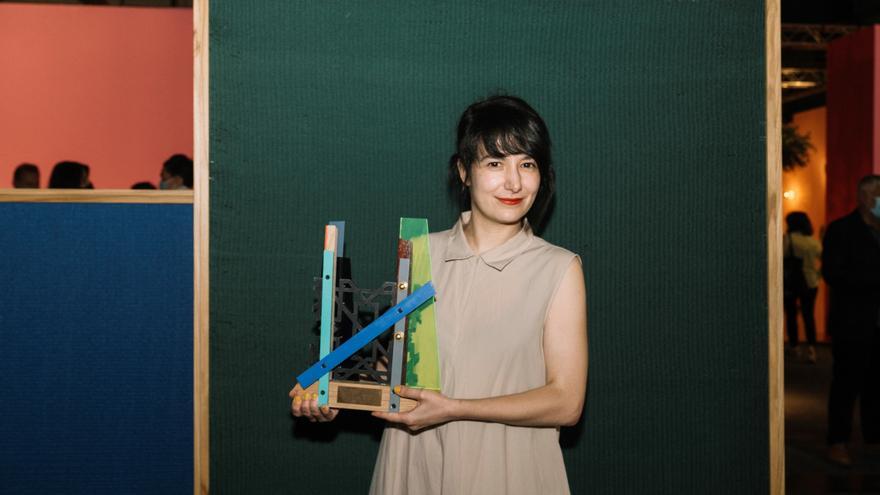 Madrid, Jul 11 ​​(EFE) .- He has held several exhibitions, works with art in a multidisciplinary way and this week he has won the emerging talent award at the ARCO fair in Madrid for his work in wood and textile “De dos cuerpo vengo”. Julia Huete is one of the emerging faces of Spanish art.

“I don’t see myself in a single discipline. I really like to draw, paint, and recently I started working with wood. It depends a lot on what I feel most related to at the moment ”, Julia Huete explains in an interview with Efe after winning the Cervezas Alhambra Prize for Emerging Art at the ARCO fair.

Julia Huete (Ourense, 1990) has always been linked to the world of art. He studied Fine Arts in Pontevedra, and has been “in competitions, contests and some exhibitions in one way or another”. For two years, she has been represented by the Nordés gallery, with whom she has made exhibitions such as “Como un verde, Libro verde”.

His references in the artistic world “keep changing”, and he opts for his contemporaries. “Sometimes you become obsessed with a particular artist, but I think the references are fed by who you are close to, who you talk with, which in my case are people from my generation,” he says.

For the work “From two bodies I come”, which has earned him the award as an emerging artist, he was inspired by a lampás. “It is a fabric that could be seen from both sides, without having a reverse as such,” he points out about these objects, commonly intended to separate spaces.

“It is about the same body that is present from both sides, it implies two spaces, and also four eyes that observe it, two on each side,” he says about the work, a structure made with two pairs of frames in chestnut wood on which four tissues are stretched.

“The fabric is a living material. You face changes according to temperature and humidity, this can be positive and it also means that the control of the work is sometimes out of your hands ”, he says about the project, which he devised last summer and on which he has worked since September to January with artisan houses such as Belategui Regueiro and Inés Rir.

He assures that the piece that has been “very good for him to understand the fabric, and work it more thoroughly”, in addition to having taken “a small step towards working the volumes”, which he assures will be dedicated to working for a season.

Huete was the youngest of the five finalists candidates to win this award, and with a view to the future she plans to continue with textiles, in which she has been working for the last five years, in addition to continuing to make volumes on media such as wood. .

The award is conceived as a turning point and with “great enthusiasm”, as well as seeing his work located in ARCO, after being selected by a jury made up of personalities from the art world such as Juan Antonio Álvarez Reyes, director of the Andalusian Center of Contemporary Art (CAAC) or Manuel Segade, director of the Dos de Mayo Art Center in the Community of Madrid (CA2M).

The future, she takes it easy, assimilating for the moment having been the winner. “I am very much a follower of the work of my colleagues,” explains Huete, still incredulous at putting her face on one of the emerging art proposals in Spain.