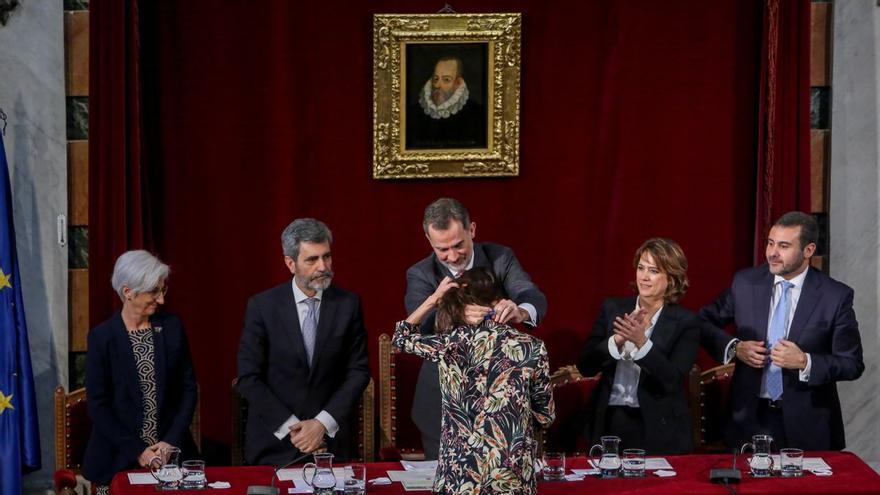 One of lime and another of sand for judges and prosecutors in the General State Budgets that the Government has presented this week. Professional associations have received with a bittersweet feeling the public accounts for next year, which will dedicate 2,284 million euros to Justice. They celebrate the new scholarship program for opponents, endowed with 1,143,880 euros, but they reject outright the cut in the number of places for access to judicial and prosecutorial careers, which have been reduced by 33% compared to those offered in 2019 and 2020. In the next year the call “may not exceed the maximum limit 200 places “according to the PGE project, when in previous years they reached 300.

In a statement, the six main associations of judges and prosecutors question that the Government has not offered “any motivation” for said cut in the Public Employment Offer for access to judicial and prosecutorial careers and affirm that it is “a jug of water cold “to investment expectations to alleviate an endemic situation of lack of resources. According to Evaluation of European Judicial Systems carried out by the European Commission, Spain has an irrefutable deficit in the number of these public employees, with 11.5 judges per 100,000 inhabitants. This figure is below the European average ratio, located at 17.7. Regarding prosecutors, in Spain there are 5.2 per 100,000 inhabitants, when the community average is 11.3.

“It is evident that more positions are needed. We see how every day it is necessary to fill positions on commission to reinforce courts that do not have the capacity to support workloads of 240% compared to what would be reasonable,” says María Jesús del Barco , dean judge of Madrid and spokesperson for the majority and conservative Professional Association of the Magistracy (APM). Del Barco also assures that this need for new professionals is going to be increased in the coming years by the retirements of the promotions of the eighties, which were very numerous, and by the high number of early retirements that occur in the career.

Prosecutor Víctor Castells, member of the secretariat of the Progressive Union of Prosecutors (UPF), also sees the number of places planned for next year as “insufficient” and considers it essential that the number of places be increased immediately. as the staff of the Prosecutor’s Office. “In the case of prosecutors, more places are needed to meet the new obligations arising from the amendments to the Civil Procedure Law for the support of people with disabilities,” he says. Likewise, Castells affirms that there are almost a hundred last promotion prosecutors who lack a position in ownership and are awaiting destination and to which the 132 who leave the call that is currently in its final phase can be added if they are not increases the staff.

By contrast, the associations celebrate the game of more than one million euros for scholarships for opponents of judicial and prosecutorial careers. The document includes an item of 1,143,880 euros for those who present themselves to this opposition in addition to aid for opponents of the State Bar and lawyers of the Administration of Justice that add up, among all, almost 1.6 million euros. In 2008, the Ministry of Justice, through the Center for Legal Studies, convened a scholarship program for opponents of judge and prosecutor, but it barely lasted one year. The economic crisis and cuts also devastated this program. Since then, the only public aid in force were the forty granted by the Basque Country and which are endowed with 550 euros per month. The Ministry of Justice has not yet revealed the details of its scholarship project or the amounts of these grants.

According to data from the General Council of the Judiciary (CGPJ), 98.4% of the opponents of class 69 – the last to enter the race – needed family financial help to be able to prepare for the opposition. And only 4.8% enjoyed a scholarship, which are barely non-existent. At the state level, there are only private aid granted to opponents without resources by the majority associations – the conservative Professional Association of the Magistracy (APM) and the moderate Francisco de Vitoria Judicial Association (AJFV) – and financed by Banco Santander. In addition, Judges and Judges for Democracy and the Progressive Union of Prosecutors launched a program of free preparation of opponents without resources which has around forty applicants.

The opposition to the judicial and fiscal careers is demanding in time and, therefore, in money. It requires dedicating between eight and ten hours a day to study, which makes this task practically incompatible with the performance of any job that allows obtaining an income for around five years, which is the average time it takes for an opponent to enter the career. And to that we must add the fees of the private preparer, who charges about 250 euros per month; and the price of manuals and materials. “This program seems very timely to us. It is important to send the message that it is an opposition that can be done regardless of the resources you have and that it is not limited to who can pay it,” says Fernando de la Fuente, magistrate of the Provincial Court of Madrid and spokesperson for Judges and Judges for Democracy.

The initiative also goes “in the right direction” for Jorge Fernández Vaquero, magistrate of Violence against Women in Jerez de la Frontera and spokesman for the Francisco de Vitoria Judicial Association. “It is something that already existed and that we think is positive that it is recovering,” he says. Juvenile judge Concepción Rodríguez, president of the Independent Judicial Forum, sees “good” that these scholarships exist although she questions that the Government “cares so much” about access to the judiciary and does not emphasize other equally demanding oppositions, such as For example, those of notaries. Rodríguez attributes this “obsession” to an interest in “controlling” the judiciary and hopes that it is not a first step in modifying the opposition system.

Some professionals also consider that these scholarships can be an incentive for judges and prosecutors who to date prepared opponents without answering to the Treasury for earnings that can reach 4,000 euros per month, as revealed by elDiario.es in this report, are forced to pay taxes on this income. “I imagine that the preparation will have to be accredited, so of course it can expose some of those preparers who remain hidden,” says Del Barco, who insists that these scholarships have to be aimed at low-income people, with good academic record and that demonstrate a certain performance. “You cannot pay a person just for being in opposition,” he stresses.

De la Fuente, for his part, also considers that these aids can be an “incentive” to perform the function “with everything in order”, although he argues that it might be interesting to clarify the taxation model to provide more facilities to do so in a correct. A similar opinion has Fernández Vaquero, who defends that there is a problem of “tax complexity”. “There are people who pay it as work performance when, in reality, it is an economic activity. And that generates distortions,” he says.

However, the tax regulation is clear and when a professional offers this preparation on their own – not in an academy, for example – it is considered the return of an economic activity and its taxation in personal income tax must be carried out as income from economic activities. Rodríguez, from the Independent Judicial Forum, directly “denies the greatest” and believes that whoever is exposing these bad practices is what he is trying to “control” the system of entry into the judicial career. “All the people I know who prepare for public examinations declare it,” he says.