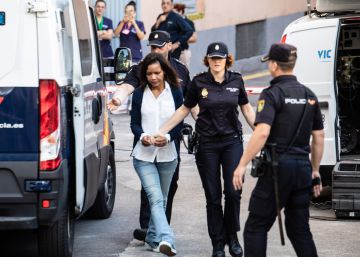 From 13.26 on Wednesday, seven women and two men remain locked in a room of the Court of Almería. Without phone and incommunicado with yours. They are the members of the popular jury that will decide on the future of Ana Julia Quezada, the woman who killed the little one Gabriel Cruz. Judge Alejandra Dodero has delivered 22 pages with dozens of questions. One of them is crucial. If on February 27, 2018, the author confesses to the crime took the life of the eight-year-old son, son of her partner, in an estate of Rodalquilar involuntarily, as she argues, or, on the contrary, she did it with surprise, surprising the child, manifestly helpless. Or if he got angry with him causing him great suffering before he died.

The magistrate has instructed the jury for half an hour. "My mission is to pass judgment based on what you have stated proven facts during the trial," he began. He has asked them to do their job responsibly, "leaving out all kinds of feelings." He recalled later that the deliberations are secret, that they are obliged to vote and has recommended that they read the object of the verdict in its entirety. In this, written as a succession of questions, he inquires about the five crimes of which the woman who was confronted with them this morning is accused, at all times crestfallen and absent.

The paper begins by asking about the 11 "central facts" around the death of the child. The jury must answer questions such as the one included in the ninth “unfavorable fact”: “Once on the estate of Rodalquilar, Ana Julia Q. intentionally, suddenly and suddenly, took G. and threw him on the ground or wall of the room, and after the impact of the child, the defendant proceeded, with her own hands to cover her mouth and nose tightly, to overcome her resistance and cause her death ”. This fact would support the prosecution's accusation, which considers that Quezada committed an assassination murder. It also presents the assumptions of murder with cruelty, which is what maintains that the private accusation occurred, and those of intentional or reckless manslaughter that supports the defense.

They must also answer on the proven facts that would lead to Quezada being sentenced for psychic damage to Gabriel's parents, who would add 10 years to the penalty, claimed by both the prosecutor, Elena Fernández, and the private prosecution; exerted by Francisco Torres and for another crime against the moral integrity of the parents who also requests this letter dp. In each of the five possible accusations, he asks about the degree of participation, modifying circumstances and finally about the guilty or guilty of the accused.

Dodero has instructed the jury about all these criminal types, starting precisely with the assassination that is "carrying out an unexpected attack when the person is in the intimate, family circle and therefore has confidence." It was raw with the exemplification of the cruelty: "Nailing a knife to a person in the thigh, and then in the legs and other non-vital organs, cutting off a finger and showing it and finally killing him by sinking the knife in his heart." It is recreating in the pain of the victim, "it is a plus," he said. This is the crime attributed by the private prosecution to Quezada.

Then he referred to the crimes against moral integrity against Gabriel's parents, Ángel Cruz and Patricia Rodríguez, during the days after the crime, when, while all of Spain continued the search for the child, the accused encouraged them, hiding their crime. "It's trying to vex, vilify." He exemplified: "It's like forcing someone to do push-ups naked, tie him to a traffic light and leave him there or force a child to eat his own vomit."

The magistrate has stopped especially at the point where there was a clear confrontation during the trial: how Gabriel's death occurred. He has explained the discrepancies to the jury. The autopsy concludes that the child died of suffocation and as such forensics pronounced. The report from the private accusation signed by two doctors, an intensivist and an internist, "life-saving experts," he said, argues that the boy was beaten and took 45 to 90 minutes to die. Forensics practiced examining the child's body and studying its tissues, he recalled. The other doctors did not participate in the autopsy and ruled on the report of their colleagues.

Another point on which the judge stated was about the mitigating circumstances introduced by the defense lawyer, Eduado Hernández in his brief of conclusions: that Quezada was under the influence of drugs and that she was in great psychological shock from the attacks of Gabriel. "Neither you nor I are psychiatrists to know what situation the accused was in," he concluded.

The jury will have to clear the facts that they consider proven about the death of the eight-year-old boy in that isolated estate of Rodalquilar. In this way, they will answer, basing their answers in the exposed during the trial, be they testimonies, reports or expert evidence. They will dilute If Quezada will be sentenced to permanent prison reviewable as the accusations claim, or three years of jail, which is the request of the defense.

From this noon, a room of 15 square meters houses seven women and two men in the Audience of Almeria. It contains a rectangular table with nine office chairs around, upholstered in black. In one corner there is a water fountain and a television not very large, old, with DVD. It has three windows that always remain with the blinds down. A more spacious adjoining room is furnished with green fabric sofas. As members of the popular jury, these nine citizens have locked themselves up on Wednesday to answer what facts they consider proven during the trial to Ana Juliao Quezada, 45, accused of killing little Gabriel Cruz, son of his then partner, on February 27 of 2018.

They have eaten in the place of their confinement and continued a task that seems difficult and long, and that will extend, foreseeably, beyond today. The magistrate will be available for any questions. At eight in the afternoon, if they have not finished, they will leave the small room, attached to the view room where, every day in recent weeks, they have faced the woman whose future is in their hands. They have left out their mobiles, have promised to keep their deliberations secret and, if they do not finish their mission this afternoon, they will sleep in a hotel, isolated from everything and escorted by the police.