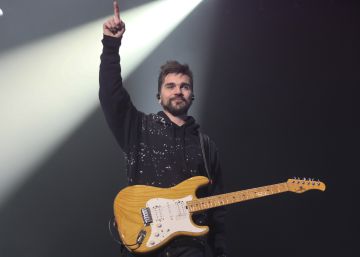 Juanes He is constantly discovering new music. In theaters in Madrid, where he found Rosalia, or through “the algorithm,” as he says when he refers to the streaming. After two decades at the summit, he says he never ceases to be surprised and passionate about new music. These days presents More future than past, a new album with a title that seems set on purpose for this moment in his career, in which he has returned to the most traditional sounds of Colombia while still lending his figure to promote new artists. Perhaps for all that together, he receives the tribute this Wednesday in Las Vegas Person of the Year of the Latin Grammy throughout his career. At the gala the next day, he is nominated for three awards.

“The reason I am here is because I love music, if not, I would not have endured so much time,” Juanes says in an interview in an suite room from Las Vegas hours before receiving this tribute. His premiere at these awards was in 2001, when he took the Latin Grammy to the best new artist and two other awards for Pay attention. The following year would arrive I pray to God. To the next one, Is for you. At 47 he has 23 Latin Grammy Awards and two Grammy Awards. "When you love what you do, you endure everything."

The world discovered Juan Esteban Aristizábal Vásquez (Antioquia, 47 years old) in the years of the beginning of what was called the Latin explosion, between 1999 and 2001, when Ricky Martin and Shakira began to sing in English and entered the lists of States United. "Many things have changed" since then, says Juanes. “It is very positive. Technology has become an ally of music and a democracy of music has been generated. It is easier to listen to music everywhere and it is easier for people to meet the people of Colombia. Everything that started with Carlos Vives and Shakira in the 1990s is today a giant explosion with urban music. ”

That giant, however, no longer sounds like Carlos Vives. The urban music of Colombia and Puerto Rico is what is entering (in Spanish) in the radio formulas of the United States in a way that no other Latin music has done before. The key, says Juanes, is "the hyperconsumption of technology." “YouTube and digital platforms have made people have more access to music. Before we heard it on a cassette or on a vinyl we heard it on the radio. Today there are many ways to listen to music and that has generated a hyperconsumption. ”

Juanes, who is old enough to have heard cassettes, seems to be enjoying the era of streaming. “Somehow that democratization means that you can write with your artists through social networks. I sometimes write to an artist that in my life I thought I could write to him. I can connect with that person by direct message. Same with the followers. Everything has become easier. ” The complicated part is that "there is too much information, an ocean of things." “But I believe that the algorithm also helps one find the music he likes. Sometimes I end up listening to artists that I would never have discovered if it weren't. ”

In the face of discoverer of artists of Juanes, Rosalía, the inventor of flamenco, stands out in recent years.trap. "When I saw Rosalia for the first time in Madrid, there I die," he recalls recalling that moment. “I went to a young flamenco festival in a theater in Madrid. I was Rosalia sitting in a chair with his guitarist. I was paralyzed to hear the voice of this woman. And the attitude. I went crazy. I fell completely in love with his music and his personality. ” Shortly after, they shared a representative. During his 2018 tour in the United States, Juanes took Rosalia on stage in Los Angeles to present her for the first time at the Hollywood Bowl.

In his latest album, Juanes sings with Colombian rapper Crudo Means Raw. “I love it raw. He is a rapper from Medellín almost from the same time as J Balvin, only he stayed in the hip hop. I heard a song from him out there two years ago. Tremendous, I can't believe it, I have to meet this man. We met and stayed in a studio in Los Angeles to make a song called dawn and that will be in the album. ”

When one thinks of Juanes, one thinks of unambiguously Latin and Colombian sounds. His rock is loaded with tradition. He doesn't see that Latin sound like his is in competition with urban musicians like the ones he has helped discover. Latin electronics, reggaeton and pop rock "can live together," he says. “Music is always cycles. Definitely the contribution of dembow and the electronic element seems super cool. But I also believe that the instrument played, organic, the person playing the instrument is an energy that cannot be replaced with anything. That mixture of the two things comes and goes. Now I just met a band called Black Midi, some 15 year old boys playing guitar, drums, a crazy thing. There is hope that guitar and rock will come back and this kind of organic stuff. ”

The Alhambra reinforces the control of ticket sales | Culture

The favorite of all bookmakers: “Pain and Glory”