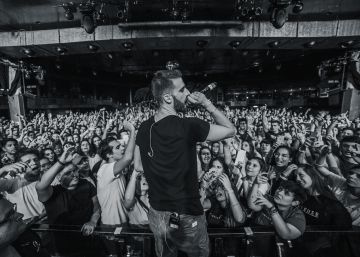 The term is not funny, but Juancho Marquis (Sevilla, 32 years old) could be classified as an anti-rapper, or at least someone whose gender falls outside the norm. In addition to being interested in opening to experience new genres and surround himself more with bands than with mixing tables, in a world of videos of high-end vehicles and odes to hard drugs, he bets on songs that speak more about everyday life and of the emotions that a person of any neighborhood can experience.

"I have grown up with those kinds of messages and influences, but I think sometimes it is incongruous what you show with who you are. I am a little tired of that fictitious image, I think it is much more honest to be undone," he analyzes.

Unlike other urban music artists, Marqués is clear that as an artist he has a responsibility for the effect that a person can generate the lyrics of his songs. "You may not behave as if you had it. It is like a weapon, with a knife you can do many useful things, but if you are not careful you might load someone. Now, I like to describe what you have to say what you have to do. I don't have the absolute truth of things, I'm not a prescriber, "he explains.

Juancho Marqués was announced with Sule B in the Suite Soprano collective, a band that in its glory years created a niche in a local scene in Madrid in which the duo also stood out Natos and Waor, Charlie and a few years before Crema, artistically renamed as C. Tangana later. His return, constantly acclaimed among his most loyal fans is just around the corner, and he confesses in the video interview with EL PAÍS, a few days before his performance at the festival Sonorama, in which he also talks about his hard beginnings with his solo career, or his ambition to improve as a musician.