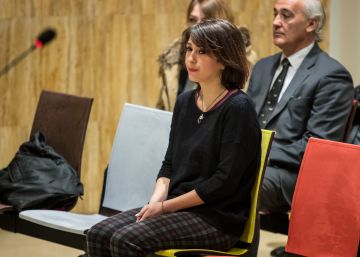 Juana Rivas has denounced before the Court of Instruction 3 of Granada to his ex-partner, the Italian Francesco Arcuri, for alleged crimes of domestic violence, injuries and threats to the two minor children they have in common and has requested the adoption of urgent measures to protect them before that they have to return with their father to Italy on August 14. Rivas denounced Arcuri before the courts in 2009 and 2016, the first occasion resulting in a conviction for injuries and the second was filed.

The complaint states that the events reported occurred between May 14 and June 6 and that they are not prosecuted either in Spain or in Italy. The children, aged 5 and 13, are spending the summer with their mother, who must return them on August 14 to the father, who has sole custody.

Rivas requests that before that date different precautionary measures be taken that separate the father from the children until the denounced facts are investigated, such as a restraining and solitary confinement order, or the suspension of parental rights. "Either by granting her guard and provisional custody, either to the maternal grandmother or, ultimately, by passing the minors to be under the tutelage of the Administration," says the brief.

Juana Rivas, who She has been sentenced to five years in prison for child abduction after not delivering her children in 2017 alleging an alleged situation of abuse, he has once again denounced his ex-partner this summer arguing that he received the children last June 7 with "sleep disorders and specific anxiety crises".

Rivas says that his children have told him "to have continued to suffer abuse, including death threats from his father in the previous weeks" to be delivered to travel to Spain.

Thus, the mother states in her complaint that "worried about the symptoms presented by her children – nightmares, insomnia and headaches on the part of the elder and episodes of anger and aggressiveness on the part of the child when he hears something about Italy – he went on the 19th June to the health center of Maracena (Granada), where he lives, where they were treated and referred to the Mental Health unit.

"The situation of vulnerability and risk to the physical and psychological integrity of minors has been reflected in the report issued by the coordinating psychologist of the Community Mental Health Unit of Atarfe", as added in the complaint, in which it is requested that these facts be transferred to Italy. Along with this, the urgent adoption of criminal and civil measures for the protection of minors is requested before they have to return to Italy on August 14.

Rivas appealed last May to the Supreme Court the sentence that sentenced to five years in prison and six without parental rights for child abduction, after in the summer of 2017 he remained a month unaccounted for with his children in breach of the resolutions that forced him to hand them over to his father. A few days before the Italian Prosecutor filed for lack of evidence the eight complaints he has filed in recent years for abuse against his ex-partner.