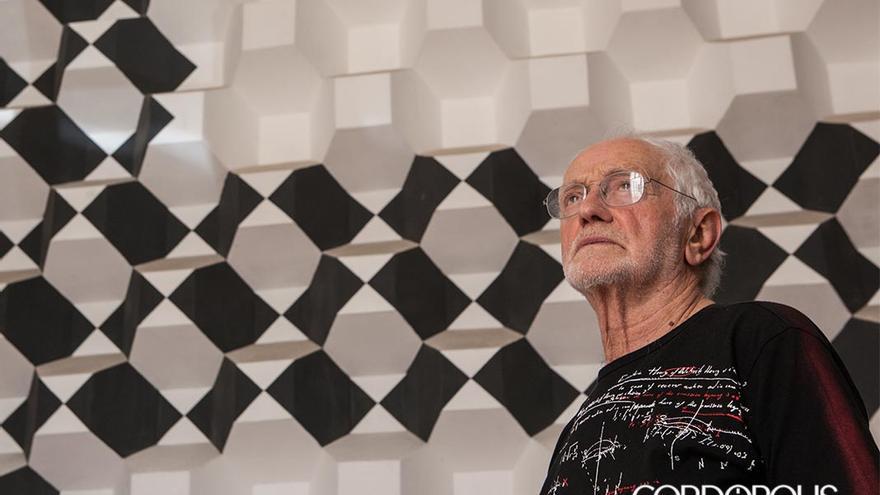 This Sunday, at 5:00 p.m., the architect and artist died Juan Serrano, a member of Equipo 57. Serrano has died at the age of 91, a few days after the Center for Contemporary Creation in Córdoba inaugurated its last exhibition, Alhambra, how did you advance Cordópolis. The artist was unable to attend the opening of the exhibition, but he was able to see the installation recently.

Artist, sculptor, painter and architect, Juan Serrano has been one of the most versatile men of culture in the city of Córdoba. As an architect, he is the author of numerous works in the city, such as the reform of the Bulevar del Gran Capitán. And as a member of Equipo 57, he has left a profound mark on contemporary Spanish and European art.

Much of the work of Juan Serrano is part of the life of Cordoba. Many of his works appear inside and outside public buildings in the city. His last major donation was that of two large sculptures on display at the Cordoba City of Justice. Serrano has already donated a mural to the Faculty of Philosophy and Letters and also a lighting installation that lives permanently in the upper gallery of the Rectorate of the UCO. Likewise, the one who was the founder of Equipo 57 has already donated two other sculptures to the city’s Museum of Fine Arts.

Minutes after knowing the news of his death, the expressions of affection have multiplied. From the contemporary art sector, the Union of Visual Artists of Andalusia (UAVA) has conveyed to the family “our deep sorrow and our deepest condolences for the death of our honorary partner Juan Serrano Muñoz (Córdoba, 1929-2020). Likewise, we express all the respect and love for his family, his wife Anna Freixas, children, his closest friends and colleagues in these difficult times ”.

Juan Serrano is considered one of the most important Andalusian artists of the last century, being a pioneer and an essential pillar both in contemporary creation and in the impact that his creative work has had on the generations that have followed him. His visionary involvement in the collective, in art as truth and a way of life, his humility or his immense creative capacity that he has maintained until the last moment -as demonstrated by his recent intervention in El Tanque Tenerife with the work D’Espacio and the recently Alhambra work inaugurated in the Center for Contemporary Creation of Andalusia (C3A) in Córdoba – they make him an irreplaceable person, recalls the UAVA.

Possessing a colossal talent, he has been in love with space. His pieces, both in sculpture and in architecture or furniture, are the result of a deep rational and emotional synthesis that he manipulated both through geometry and materials. The latest works in which he incorporates play, the labyrinth structure or the mirrored surface as a creative element, result in highly current artistic proposals. Without forgetting the quality transmitted by its small furniture models, many times taken to a real scale.

Since 1967 he worked as a municipal architect in the Córdoba City Council, being responsible for the pedestrianization of the Bulevar del Gran Capitán in Córdoba, its Fountain of Cubes and the rehabilitation of the College of Architects, among others. From 2014 to 2020 he chaired the Association of Friends of Madinat al Zahra.

The team has been awarded the Gold Medal for Merit in Fine Arts (1993), First Prize Pablo Ruiz Picasso (1999), Medal of Honor from the City of Córdoba (2007) or the Blanco White Prize from the Andalusian Council of the European Movement (2014).

“To our dear Juan Serrano, defender committed to social movements such as environmentalism and feminism, we can only express our infinite gratitude for him, and assure him that he will be present in our memory forever. Rest in peace ”, signs the Board of Directors, chaired by Marisa Vadillo.