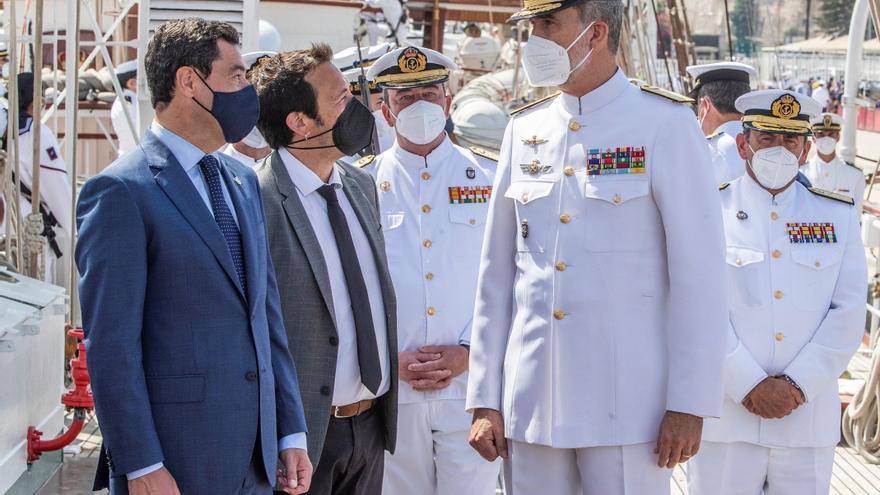 The Navy training ship Juan Sebastián Elcano has arrived this Sunday at the port of Cádiz, after ten months of voyage on his 93rd Midshipmen’s training cruiser, with King Philip VI on board.

Don Felipe has spent the night in Elcano, after it embarked on the afternoon of this Saturday when the ship anchored in the waters of the Gulf of Cádiz, according to sources from the Navy.

The ship has been accompanied by the frigate ‘Victoria’ and by small private boats until its entry into the port of Cádiz, where the amphibious assault ship ‘Galicia’ has given it honors once it has set sail for the Cádiz dock.

There, around a thousand people awaited the arrival of their relatives, a crew that has spent ten months aboard the ship, in a circumnavigation that, Navy sources, have described as “unique”, having not been able to go ashore during the entire voyage.

In fact, has ended a month ahead of schedule due to the current circumstances of pandemic, and the crew was vaccinated with the first dose on May 30 in the port of Souda, on the island of Crete.

As soon as he touched land, the King received on board Elcano the different civil authorities, including the president of the Junta de Andalucía, Juanma Moreno, and when he got off the ship to greet the families present before leaving, he has been fired with 18 salvoes.

Once the 62 midshipmen on board, of promotions 423 of the General Corps and 153 of the Marine Infantry, and the staff, made up of 197 men and women, They have disembarked to greet their relativess, the ship has begun its transit to the La Carraca Naval Base in San Fernando, concluding both its XCIII Instruction Cruise and its XI round the world.

What’s more, In this eleventh circumnavigation, two half boots from Amontillado Viña AB “Estrella de los Mares” have traveled in the holds of the training ship, a broth from González Byass described as “back and forth” that commemorates the feat carried out by the Portuguese Fernando de Magallanes and Juan Sebastián Elcano, and which now returns to Jerez for bottling.

The ship set sail from San Fernando (Cádiz) on August 24 to commemorate the deed carried out by Magellan and Elcano, making a stopover in his journey in key places of the first round the world in history.

Among them, Punta Arenas (Strait of Magellan, Chile), in October; Guam (Marianas, Micronesia), Samar and Cebu (Philippines), in March, and Ternate and Tidore (Moluccas, Indonesia), in April, on the same dates that five centuries ago the expedition led first by Magallanes and, later, by Elcano.

The Juan Sebastián Elcano, 113 meters long and equipped with four masts and 20 sails, made its last stop last week in Valletta (Malta) after crossing the Suez Canal.