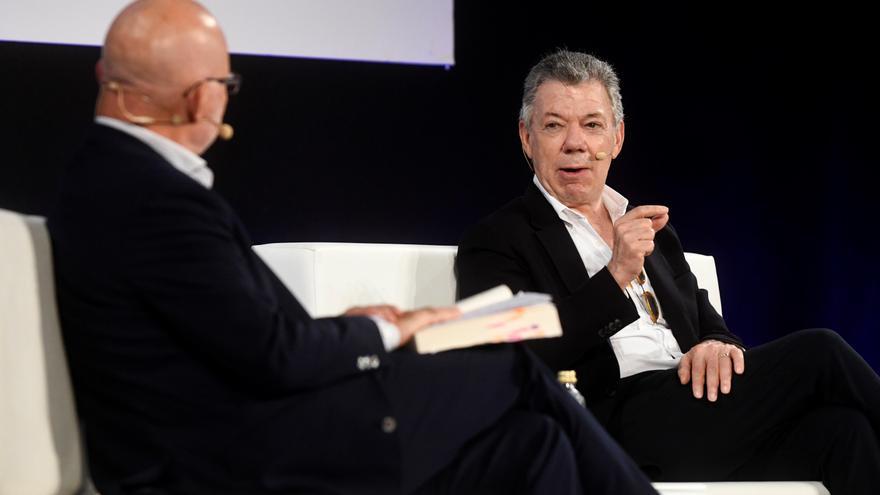 Segovia, Sep 17 (EFE) .- The former president of Colombia and Nobel Peace Prize Juan Manuel Santos pointed out this Friday that the victims of the armed conflict in his country taught him that “the human condition is basically good” and that Often those who have suffered the most are the most predisposed to forgive.

Santos has starred in one of the events of the Hay Festival Segovia this Friday together with the political scientist and human rights activist Íngrid Betancourt, who was kidnapped by the FARC for six years, due to the book recently published by Planeta ‘A pending conversation’.

In its 543 pages, the writer Juan Carlos Torres collects forty hours of recording of twenty dialogue sessions, in which both politicians recall key episodes in the history of the country, such as the traumatic experience lived by Betancourt as of February 23, 2002 .

During the meeting, the former Colombian presidential candidate has recounted how it was for her that day, when she had left Bogotá and was going to another city to go to a campaign event for her Verde Oxygen party, at a time when she they had broken the peace talks.

Betancourt has narrated that he was traveling without an escort because then-president Andrés Pastrana had withdrawn it and he found what appeared to be a military checkpoint and the first thing he did was look at the boots that those armed men were wearing, just as he had been taught.

“Those boots were rubber boots, and those of the Colombian Army were leather boots, so I knew that was what the FARC was,” Betancourt said about that moment in which that “nightmare” that would last six years began.

From those times she has told other terrible anecdotes, such as the moments in which she was forced to climb vertical walls with another person chained to the neck so that, if one fell, the other also, or to cross a river through a log in the same conditions. , for which, if someone fell and they did not do it on the same side, they would be hanged.

For his part, Juan Manuel Santos, has told some details about how he experienced the rescue of politics since the so-called Operation Jaque as Minister of Defense of Colombia of the Uribe Government, such as the moment in which he promised the mother of the victim that he would not rest until he released her.

The winner of the Nobel Prize for his work to achieve peace after more than fifty years of armed conflict has commented that, when the agreement was signed, at first he thought that the victims would be the ones who would most oppose the ” concessions “that were necessary, but the opposite happened.

“The victims taught me that the human condition, basically, is good,” said the former president, who says he had “a wonderful life lesson” when he realized that often the people who have suffered the most are the most generous because they don’t want others to go through the same thing.

As a paradigmatic example of this, he pointed to Íngrid Betancourt, who at another moment of the talk claimed to be “in love with the human condition, with the human being, with their abilities, their strength, their fears and their doubts”: “I am optimistic. I live on hope. I have faith, “he said.