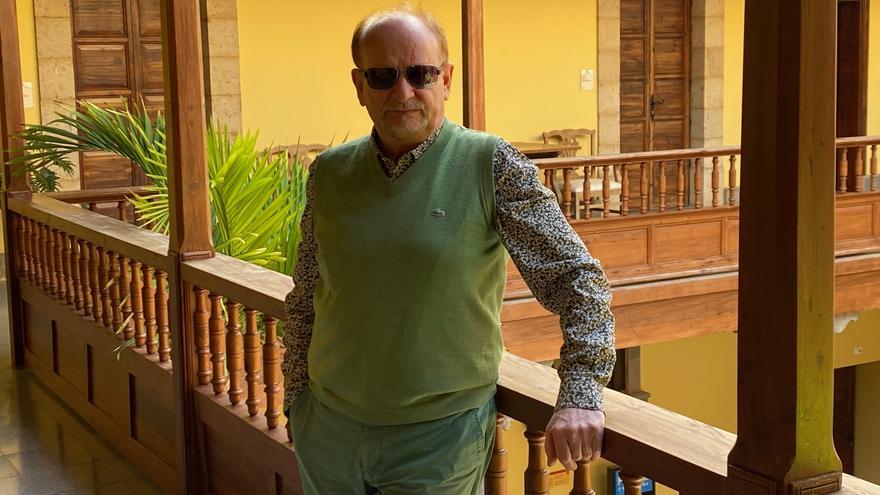 Juan José Medina, researcher and developer of interactive accessible products of the company Puntodis and expert in accessibility in communication, offers this Thursday, March 11, at the Casa de Colón, at 7:00 p.m., the free talk Blindness and the art of playing to explain the parameters of the high relief in the line with which different palpable works of the aforementioned museum have been made, and that are incorporated into his didactic and expository speech as of March 15. To attend this conference, prior registration is required at http://www.casadecolon.com/es/actividades.

Medina assures that the tactile pictures in high relief that the Casa de Colón has implemented within its communication accessibility project “is like touching the sky for a blind person, but it is also very interesting for people who can see, since they are amazed how are the parameters in the line ”.

Medina has been responsible for supervising the implementation of the project Ways of seeing that has started up this museum center dependent on the Council of Culture of the Cabildo Gran Canaria for universal accessibility and that has been developed by the company Puntodis. This system makes the Casa de Colón a pioneer in the Canary Islands, since up to now high relief has not been used in the Islands in museums but in maps, panels or signage of tourist areas and historic centers.

It is a tactile resource, and also an auditory and visual one, so that blind or low vision people can discover four paintings: the flamenco tabla Saint Catherine of Alexandria and the images of the Patio del Pozo and the model of the La Niña boat, as well as the map of Christopher Columbus’s first trip to America.

This high-relief technique is not made on the original painting, but rather a highly studied system since the designers have degrees in Fine Arts, he explains. “To do so they have to have a knowledge of the painting, to later study the most appropriate textures for a person to touch and understand what they are touching,” he adds. On the primary basis of painting, those responsible for developing this technique at Puntodis study the parameters of the high relief so that they can be understood to the touch and, at the same time, the visitors are guided with the help of the voice that explains what is happening. touched to understand it, details.

The four images of the Casa de Colón are made up of two sheets of aluminum and one of fiberglass between them, while the high-relief technique is carried out with a patented system created through chemical and soluble compounds. “Reliefs are created that last and last when they dry. The important thing is the finish, because the sensation to the touch has to be pleasant, since if it scratches my fingers or sands my hand, I give up, because it creates stress for me ”, he explains.

In the case of the flamenco tabla Saint Catherine of Alexandria, For example, it was made from a high resolution image and it was studied which textures were best for the face, the crown or the shapes, Medina details. Not only the printing process is studied, but also the texts and the history of each painting. In fact, he assures that it has taken them four months to complete the four images of the Casa de Colón.

The Puntodis company has carried out similar works in the Guggenheim Museum in Bilbao, but in this case it is a notebook with seven sheets of different elements of this enclosure that are shown to blind people as soon as they enter. They are also currently working at the Prado Museum in Madrid to make a similar notebook with pictures to play with. “Large museums do not yet have this generalized technique, they have different ones, such as in ink, but they have not been successful,” he says.

This technique has been in the Canary Islands for a long time on interactive maps of tourist areas, such as Las Canteras Beach, where there is also signage both in high relief in the line, as well as in ink, in Braille and in voice. It is also in tourist spots in municipalities such as Telde and Agaete, and in different areas of Tenerife, including the tram. The Gran Canaria Arena Pavilion has a tactile floor for the blind.

The Casa de Colón is not only a pioneer in the Islands in high-relief paintings, but it was also a pioneer more than five years ago, after the first accessibility reform, when it implemented an interactive guidance system, both in panels and in ink. , in Braille and in audio, also from Puntodis, which indicates in six languages ​​where the visitor is at all times and offers information on each room. “It is very important because it is useful information for everyone, for the blind because they can arrive, but also for any visitor,” he details.

Through this system, thanks to a QR code, the visitor can reach all the museum rooms in Russian, Japanese, German, English or Arabic, explains Medina, while adding that it is an expanded accessibility, because eliminates the language barrier and is even useful for a person who has left their glasses at home. “If I, when designing these systems, thought only of the blind, I would be discriminating against the rest of the population,” he specifies.