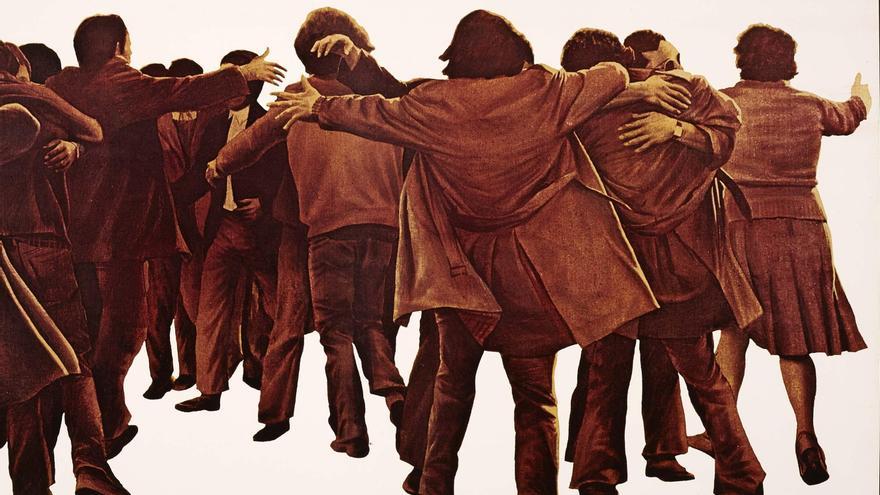 During the first year of the Transition, 1976, several events showed that the door of fascism was open and it would be difficult to close it. It is the year of “the Vitoria massacre”, when more than four thousand workers went on strike, locking themselves in the San Francisco de Asís church, in the Zaramanga neighborhood, in Vitoria, and the eviction by the police, with ammunition real and tear gas, which caused hundreds of injuries and five deaths. In 76, the popular clamor demanded firm changes towards freedoms, as well as the enactment of the amnesty that would end the sentences of thousands of political prisoners. Here is the important role of Juan Genovés (Valencia, 1930 – Madrid, 2020) and an image, later made a monument in memory of the murdered lawyers of Atocha: Hug.

Genovés had painted a series of paintings with white backgrounds and figures of men in earthy tones. In all of them there is only a woman on the sidelines, who waits with open arms for someone who we do not know if he is coming or never arrived (according to the artist, he waits for the future). The painting was called Hug, and in 1976 it was exhibited in Zurich. The Democratic Junta (headed by the PCE) considered it ideal to express popular sentiment, so half a million posters were printed that embraced the streets calling for amnesty. Genovés was detained for seven days and a group of artists locked themselves in room 8B of the Prado Museum to protest and demand his freedom.

Juan Genovés. Citizen and painter (Turner, 2021) is a biography signed by three connoisseurs and masters of the art world: the critic Mariano Navarro, the critic and historian Alicia Murría, and the specialist in contemporary art Armando Montesinos. Mariano Navarro tells us that “six years ago we started working on the book. The fundamental thing is the interviews with Genovés, as well as interviews with everyone around him, such as his family or the people who shared political or artistic adventures with him. We have also handled Genovés’ own archive located in his house in Aravaca “. The words of Juan Genovés are sometimes translated into a paraphrase that makes us read the Valencian artist speaking in the first person.

We read in the book his direct words: “Hug It was immediately bought by a Chicago collector and, a couple of years later, as Felipe Garín was director of Fine Arts, he proposed to buy it because he considered it a historical document. “Here appears a certain Pierre (without last name) who was the one who convinced the collector of an exchange: “He traded it for a painting of mine, just a little bigger than Hug“. Genovés says that his painting returned to Spain at the end of 1978 and that those responsible for the Spanish Museum of Contemporary Art” buried it in their inexhaustible and cumbersome warehouses. “When he asked about it,” they told us they didn’t have it, that the box had not arrived, and we had the invoice from customs. It was even published in the press that it had been lost. “

Until, out of effort, two museum workers affiliated with CCOO started looking for it and almost two months later they found the painting. Genovés says that “they had put it inside a box and this one, in a bigger box. They had hidden it, come on!”. The find was published in the press, they exhibited it for a couple of months and again back in the warehouse. “Outside journalists came to talk about the Transition, they would put the painting behind the interview and then put it back. We did the interviews directly in the warehouse.” Genovés assures that, if any institution requested it to exhibit it within Spanish territory, they would not lend it: “They only did it for exhibitions outside the country, but not here, locked up here.”

The emblem of the amnesty that was imprisoned, worth the redundancy. Genovés assures that Hug left for an exhibition at the Thyssen Museum in 2014 (on pop myths): “There I asked Manuel Borja-Villel, director of the MNCARS, why he wasn’t hanging. And he answered: ‘I have many tensions’. Whose tensions? A painting that represents people hugging, I don’t know what the problem is. Then I realized that for the extreme right this painting means the triumph of the Reds. “Genovés sentenced:” These tensions come from those important people in the country, from those obscurities. “

Finally, at the proposal of Izquierda Unida (and with procedures through CCOO), Hug It has been in the Congress of Deputies since 2016. Located in the Hall of Lost Steps, next to the portraits of two presidents of the Second Republic: Manuel Azaña and Niceto Alcalá Zamora. Before passing away, Genovés showed his rejection on several occasions due to the difficulty that this posed for citizens, since a written instance is needed to visit him. The bureaucracy makes it “easier to see him when he was in the basement of the Reina Sofía.”

The artist confessed to the three writers of his biography: “I have always said that this painting does not correspond to me, I have painted it, but the image has been made by thousands of Spaniards. If those people have made it their own, I have no authority to say ‘what about mine?’ That is why the copyright of the painting was donated to Amnesty International: “At the time the poster of HugAmnesty International also made one, of poorer quality, but with the collection of which it was founded. “

Juan Genovés is also the author of the monument at 55 Atocha Street in Madrid, the place where the labor lawyers were assassinated on January 24, 1977. The Atocha monument is one of the artist’s few forays into sculpture. And he tells: “The day of the inauguration, June 10, 2003 (…) the place was packed, the mayor gave his speech and then me. Then I saw that people were disconnected from what I was saying, even the person I was looking at, so I ended up speaking in a bad way in the middle of the growing buzz. What was happening is that the “tamayazo” had just been given in the Madrid Assembly! “