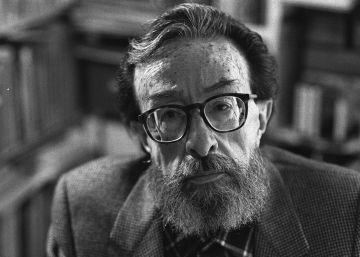 A man (a writer, an artist, an admiral, a journalist or a worker) is also the friends who travel his wake, his way of being, his career or his words. Already Juan Eduardo Zúñiga not only do his books define him, a collection without fault of the best modern literature of the twentieth century, a dare in times when writing seemed to be the carelessness of a pasquín, the young friends he had around, or those who in a way or another extended his voice, the written example of the long-lived master who has just died.

Among those close virtuosos of the syntax that he gave to the history of the narrative now are, for example, Luis Mateo Díez or Manuel Longares, who when life was drowning definitively, after having lasted so long, were nearby, like Felicidad Orquín, his wife, of course, or his daughter Adriana, to encourage words that still with 101 years they gave birth to their Memories of life.

He was a thorough and educated man, he received you at home as if he were a Japanese artist, sitting in an armchair that looked like a skeleton, and on him, elegant, well dressed, his own frame that was becoming more and more concise, closer to the shadow of Giacometti that became his own writing. As he went through the history of his best years (those of his mature youth) in the face of the indifference of those who did not consider him fashionable, he later accepted with the same patience that they enthroned him with prizes and gifts.

Just as his writing did not accept urgent commitments, and Madrid and Spain continued to have the same black and white painting of his first discoveries, if only he changed his glasses. So he was always lean, polite, like a scribe who took notes of history so that he did not forget that there was also life and pain and celebration at the times when the long winter of the city he loved most developed.

I received you, then, at home, before a landscape that seemed painted by him, the old Retreat he greeted as if it were the extension of his eyes, and always had, in addition to words spoken as if he apologized to history for existing , gifts, drawings, a letter he could not send by mail. One of his gifts was his own letter, made as if he had a precise punch in his hand, dipped in the ink of his heart. Until beyond the centenary he was a lucid interpreter of the Spanish transit, whom he saw in war and in peace and in poverty. That “snowy or broken Madrid” that she portrayed was now, in recent times, the center of a Spain whose democratic project did not take her away from “the sad memories” from which she has never said goodbye. “Spain,” he said in the Retreat, when he no longer allowed himself to walk, “he has impoverished his project.”

But Zúñiga was not just the lucid man who saw in black and white the past that the present took to the future without enthusiasm; He was also a happy man at home, with Happiness and his own, and with his friends. The day someone makes the payroll of their friends, the newspapers would have to be opened in a channel to welcome the quality and tone that this love relationship had that today only breaks the absence of death.

He did not want the war nor did he do it, but without him that wound from Spain would not have his best chronicler of the broken life that, for example, becomes a major metaphor in a story that no one can ever rewrite because Zúñiga there is only one. That story is Rose of Madrid If tenderness has splinters and pain inside and it also makes sense, it is in that greater story of its history, which gives meaning to the life of a writer, of an absolute writer, which Juan Eduardo Zúñiga leaves behind. Juan from Madrid and the Retiro.

“Ayuso will be in the garbage dump in two years”

the integration of women according to Izaskun Chinchilla