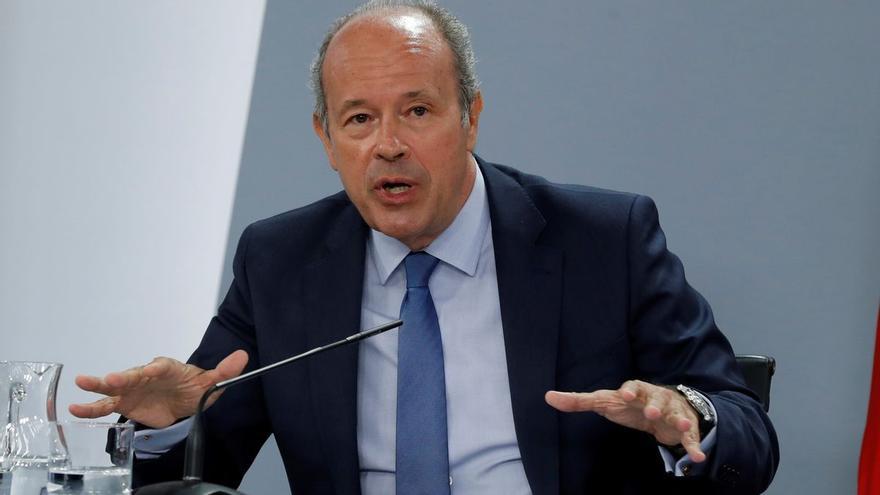 The former Minister of Justice John Charles Field He has served six months in the National High Court away from procedures of political significance. Assigned to the Criminal Chamber, Campo has had to refrain from almost all the big cases, which has raised the question in some of his colleagues about the advisability of his return to the judicial career and, specifically, to a section that suffers a significant workload due to having to resolve, among others, all the resources of the Villarejo macro-cause.

Campo has received per turn form a room to adopt decisions corresponding to the case against the Pujols, the one that investigates Tsunami Democràtic and, more recently, in the last case opened by Manuel García Castellón against Podemos and its alleged irregular financingin addition to the aforementioned pieces of the Villarejo case, including the espionage on Luis Bárcenas with reserved funds.

In the case of the secret piece that is followed against Podemos, Juan Carlos Campo was appointed rapporteur on November 17, 2021 to resolve the appeal of the Prosecutor's Office. Almost a month, on December 14, Campo communicated his abstention, and until January 31, after two and a half months, a new rapporteur was not appointed to resolve the appeal presented by the Prosecutor's Office against the "prospective" investigation of the judge Garcia Castellon. Last Wednesday, a court of which the former minister was not a member, upheld the appeal of the Public Ministry against the investigation undertaken by García Castellón.

Article 219 of the Organic Law of the Judiciary establishes the reasons for abstention or recusal in a judge. The last of them, the sixteenth, mentions "the judge or magistrate having held a public or administrative position on the occasion of which he may have been aware of the object of the litigation and form criteria to the detriment of due impartiality." Campo alludes to this in a “type document” that he sends to the Chamber every time a case with “political” implications appears, pointing to elDiario.es sources of the Hall itself. Campo also refrains from deciding on the extradition appeals granted by the current government.

A paradigmatic case of Campo's abstentions are the pieces of the Villarejo case, where United We Can, a member of the coalition government that formed the former minister, exercises popular accusation. The motif is reinforced in the kitchen piecewhere the Minister of the Interior during the Government of the PP Jorge Fernández Díaz appears as being investigated and the PSOE also exercises popular action.

Campo was assigned by distribution to integrate the court that will resolve the appeal of the Anticorruption Prosecutor, of the popular accusations and of a large part of the accused, against the order of end of instruction decreed on July 29 by Judge Manuel García Castellón. The decision adopted by the Criminal Chamber will be a turning point in the investigation of the most serious case of corruption in the Ministry of the Interior since the GAL and its resolution is still pending despite the fact that the appeals were filed in September of last year. Precisely, the Third Section set last Friday, March 4, for deliberation and ruling, but "service needs" have forced Campo's substitute and two other magistrates to delay the momentous decision to March 18.

Sources from the National High Court explain that Juan Carlos Campo carries out a meticulous review of the causes in which reasons for abstention may appear, that the procedures from which he withdraws are compensated with others assigned to him and that the resolution of appeals is not the only work of the Chamber, as is the case of forming a court to try cases, such as the one currently integrated by the former Minister of Justice and which will pass judgment on the Fitonovo casea network of illegal commissions in various Andalusian provinces.

Juan Carlos Campo has been holding positions of responsibility in PSOE administrations for two decades, both in the Junta de Andalucía and in the central government. Already in the Executive of José Luis Rodríguez Zapatero he was Secretary of State for Justice. Meanwhile, his place without occupying him was in the Provincial Court of Cádiz. It was shortly before Sánchez chose him as Minister of Justice when the General Council of the Judiciary awarded him, in December 2019, a position in the Third Section of the Criminal Chamber of the National High Court, a position that he did not occupy. until his departure from the Ministry and incorporation last September.

Pedro Sánchez decided to dispense with Juan Carlos Campo in his last renewal of the Council of Ministers and replace him with Pilar Llop. In the previous months, Campo was one of the voices of the Government that with greater intensity it was used to justify the pardons to those convicted in the cause of the procés. Sources close to her assure that she did not receive an explanation from Sánchez as to why her dismissal and that the former minister did not ask for it either.

In recent months there has been speculation about Campo's candidacy for the Constitutional Court, a possibility that would reopen the debate on the excessive politicization of the court in charge of interpreting the fundamental rule, as occurred with the election of Enrique Arnaldo and Concepcion Espejel last October.

The revolving door for judges experienced one of its most convulsive moments in the 1990s, with the return to the National Court of Baltasar Garzón, chosen by Felipe González as delegate of the National Anti-Drug Plan and who, after leaving office and returning to the specialized court , reopened the cause of the GAL, one of the cracks through which that socialist government ended up collapsing. A later reform prevented judges from returning to the active exercise of their career in the two years following their time in politics, but that restriction disappeared to establish only certain limitations. Until in 2011, also with a socialist Executive, automatic re-entry was authorized again.

Coinciding with Campo's return to the National High Court, the PP proposed a new, more restrictive reform. He did it through the mouth of his spokesman in matters of justice, Enrique López, destined for the Appeals Chamber of the National High Court, to which he could return if at any time he ceases to be a Minister of Justice of the Community of Madrid and does not find gap in the next Executive of the Popular Party.