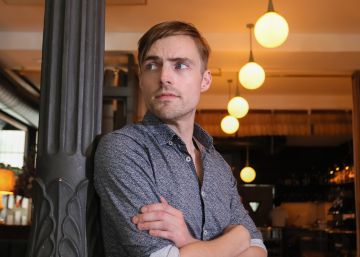 Before publishing your first book, Joseph Knox he had not gone anywhere off the axis between the town of Stoke and his native Manchester, where he had dedicated himself to survive, to get out of the pit of drugs, violence and moral rot into which he himself had gotten; to accept the saving hand of literature; to change one addiction for another. "Writing my first novel took eight years. Before Sirens He had failed in everything he had done. I was a terrible student. He drank a lot, he drugged me, he dealt with traffickers. I saw people destroying, I had serious problems. If it had not been for the books it would have ended under a bridge ", confesses to EL PAÍS in a downtown restaurant in Madrid, where he has come to present his second novel, Deadly smile (Red and Black, like the first).

At age 31, Knox has spent a third of his life accompanied by the protagonist of his novels, policeman Aidan Waits. Therefore, when asked how much of him in this agent often outside the law, drug addict, enigmatic, past turbulent violent and yet honest within his particular moral code, he replies that he is not very sure and It sounds true. "It's like a dog and its owner. Who looks like who? "He jokes.

As a reader nor I want writers to take care of me, to take me by the hand, to give me five pieces of fruit a day

In Deadly smile Inspector Waits returns to the night shift to investigate an enigmatic death in an abandoned hotel and a case of sexual abuse with porno-revenge included. With these two lines of argument that cross until you know which is the main, Knox talks about immigration, mafias, the losers of globalization, police corruption or the growing influence of the far right, but do not believe that the crime novel has to be social. "A book does not have to be anything other than a book. The good thing about corruption, murder or harassment is that they have a great dramatic load and are elements that help me keep history on earth, "he explains.

Knox has a vital relationship with literature. As a child he suffered from chronic insomnia and his mother gave him books to read; when it ran out, he started writing. Then came a brutal love disappointment, a fascination for Humphrey Bogart and from there to The eternal dream, Raymond Chandler and everything else, including the bad life. After some work in seedy pubs he found himself making a living in a bookstore, his salvation, a mark that lingers in his vision of literature. "I'm looking for my characters are not normal, my books have style. I am obsessed with transmitting an atmosphere and for this it is essential, for example, to use the first person, "he says before stopping for a long time to think about which book took him out of the mental drift and vital drift. "I dont know. Maybe Brian Easton Ellis and American Phsyco Y Less than zero. I read them and I did not know if I was liking them. I was in an uncomfortable area, in the cold. I do not want writers to take care of me, to take me by the hand, to give me five pieces of fruit a day and make sure I do not get dehydrated, "he confesses with a kind gesture, exorcising monsters.

And to live up to that obsession, to tie himself to the addiction that saved his life, Knox can pay any price, can work 18 hours a day for months, so he can read "more than 100 times" the first third of a book if that serves to make the rest work and the story stays in the reader's head. "That's the fiction for me," confesses a compass writer and not a map, who is guided by sensations because he does not support the idea of ​​sticking to a plan. "For me it would be crazy. I work better like that. I'm exhausted, but I hope I'm honest. "

Knox does not make hostages in his search for a literature of his own. Waits is a dark character, which makes the reader feel very uncomfortable, who also knows little about him and his life. His partner Sutty (a sociopath obsessed with cleanliness and who takes advantage of the night shift to see human misery up close) is directly execrable. "It was the only way that Waits did not seem so bad," he says amused. There is nothing contained in his books, neither spectacular. The kind of dirty and brutal violence that occurs in the streets of Manchester that has frequented so much. "Sometimes it's fun and there's nothing wrong with that. We do not have to rationalize everything, "he says.

Admirer confessed to "master" James Ellroy, Knox frequents some trails opened by the author of Six of the big ones: powerful dialogues in the literary, answers without taboos in the promotional. Here are some examples of two hours of interview. The writer and the compulsive reader speak, an author who does not know the off the record:

In a few days is published in the United Kingdom the third part with which, in principle, closes the Waits series. Now he is writing something completely different, seeking to get out of the known, fleeing from repetition. Before embarking on this book, he devoted himself to traveling in Asia for three months. After the interview he left for Gijón, at Semana Negra, to see the world that life had denied him and literature he has given him.