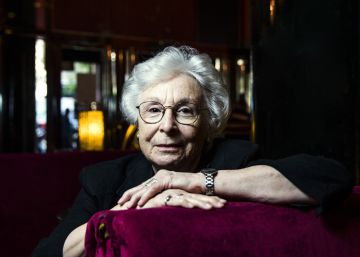 "For being a reference for several generations of present and future filmmakers [...] and for their free and without prejudice that has been essential to understand the situation of women in the years of the Transition and the consolidation of democracy" . With these - and other words - the jury justified on August 30 the granting of the National Cinematography Award to Josefina Molina, 83-year-old from Cordoba, possessing a curriculum that could have been broader if he had lived later times. "I had to leave the cinema and do television [where his best work came in 1984: the series Teresa of Jesus] because they did not let me do what I wanted, I could not experience or leave my mark on the possible films, "he says, his voice is days before Saturday morning he receives from the Minister of Culture and Sports, José Guirao, his award.

Molina is the first director to receive this award, which has been awarded, with its current format, since 1980. So far only seven actresses had obtained it, the screenwriter Lola Salvador, the costume designer Yvonne Blake and, last year, the producer Esther Garcia It is not the first time that Cordoba opens roads: she was the first filmmaker who left the School of Cinematography in the early sixties, the first director she received the Goya of Honor and the first filmmaker to enter the Academy of Fine Arts of San Fernando. "That I am the first director to receive the National Film makes me very sad," says Molina. "This has happened because we are not visible and it is a problem of mentalization. We are 50% of humanity: if we do not insist on contributing the talent of women in the cinema, half of society will feel rejected in what is seen onscreen". Molina speaks with a softness full of firmness, deepens that her only goal is "simply, equality." Find painful examples today: "The other day the vice president of the Community of Madrid spoke, to avoid any, of read Y bibianas. What is that? Do we start with the list of politicians who have not given the stature? And it just attacks two women who have worked on the Law of Equality, who now want to jump into the bullfighter. "

The filmmaker is overwhelmed by sexist crimes, such as the triple crime of Valga, in Galicia. "I think a lot about I give you my eyes, that delved into the minds of those murderers. What's up there? Is it really the fault of women? Let's change the subject, when I talk about these murders, I unnerve myself. "Although she insists:" Cinema and television have to work in this field. They have to provide their references, because today the audiovisual rules ".

Molina is one of the founders of Cima, the association that groups audiovisual workers in Spain. She has been struggling for years against details, words, against micromachisms of society, such as calling the awards "the best director", when she is the best director. "The stories, the language, the religion, the legends ... have a lot to do with the sublimation that is made of the woman. There are also those who fall at the other ridiculous extreme, like putting the months of the year in feminine. In short , we live in a moment that I thought was positive and I am finding many people who do not want to comply with the Law of Equality. It is not that we are the chosen ones, that we take everything away from us. Feminism is not a struggle to replace the men, at least I've never understood it that way. Luckily, the feminist revolution is not a fad, it won't happen. "

"Feminism is not a struggle to replace men, at least I have never understood it that way. Luckily, the feminist revolution is not a fad, it will not happen."

From his speech on Saturday with the Prize in his hand, he confesses, he has great doubts. "I want to say many things, but above all I want to be brief." He will review his career, forged in the feminist struggle. "In my cinema I have talked about the problems of women. So I understood that I contributed something. The prize connects me with my adolescence, when your projects are forged, you wonder what you are going to do in life. And I wanted to make cinema in that Cordoba land. My aesthetic was formalized in those lands that as a child made me happy. " Any advice for that teenager? "No, because that girl did what she could, and in that she could, she tried to be her best. But it was not easy. I left the Film School with a terrible panorama. If the number one of my promotion, Claudio Guerín , it took a lot of time to make a movie, and it was from sketches, What future was waiting for me? ". Molina, after several short films, turned to television." Although there were people who undervalued work on TVE, in a culturally deficient country, that was a tool that entered the houses and with which, through the second chain -where I worked-, we show you the great universal authors. That was of some use: I took that job as if it were a movie to win the Oscar. "

As for the little cinema he made, today it doesn't hurt much. "I always tried that something else, even in Lola goes to the ports, Use conflict to talk about women. I feel proud, I have dedicated my life to audiovisual and feminine and I do not regret it. "