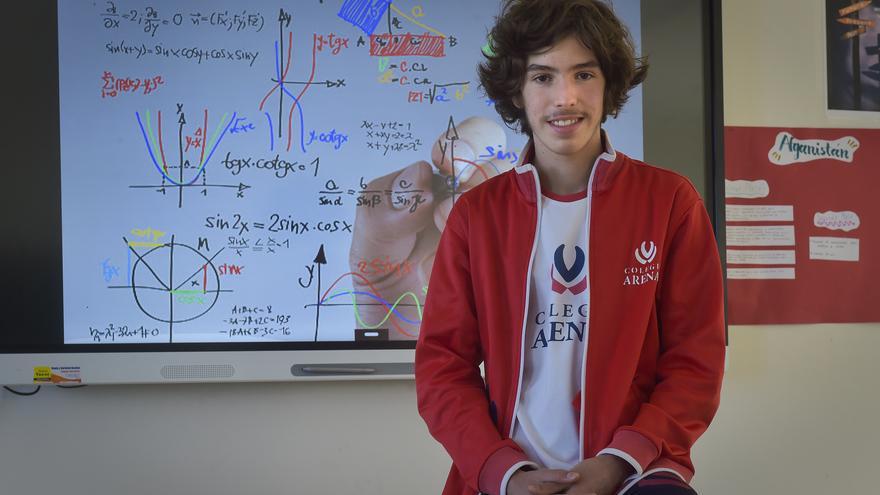 José Vega, a student in the mathematical Olympus. At 16 years old, Javier Vega Peleteirohas become the Canarian champion of the LVIII Spanish Mathematical Olympiad imposed on students of higher courses. “It has been an honor. I surpassed students older than me, from the second year of high school. At first when they gave me the news that I was the champion I did not expect it, I was surprised. I am proud and happy with my achievement,” says Vega.

The young man, who is in the first year of the diploma program of International Baccalaureate at Colegio Arenas Atlántico, got 22 points in solving the four problems that made up the first phase of the olympiad, beating all the participants including the first classified of the university district of La Laguna. «The Olympiad was at the Faculty of Computer Science of the University of Las Palmas de Gran Canaria (ULPGC). We arrived there and we already had a piece of paper with the questions and a bag with gifts. We were given a short talk by members of the Mathematics department and then we had four hours, from 9:30 a.m. to 1:30 p.m., to solve four problems. The test is about 28 points, seven for each problem. If you finish before time, you hand in the paper and leave. I finished early, I did it in three hours and I left before", Explain.

Since he was little Javier has a special predilection for mathematics, an area that he is passionate about and that motivates you to continue discovering. «Mathematics seems to me to be a very broad and interesting field, it is very beautiful. Although it may not seem like it, it has many applications in real life and in technology, artificial intelligence or engineering of all kinds. It is the future », he summarizes.

It was his advanced mathematics teacher, Raquel Álvarez, the one that encouraged him to enter the mathematical Olympiad. Now she will be the one to support him to prepare for the national championship that will be held between the end of March and the beginning of April.

«For the Olympiad at the beginning I was going to have preparation but in the end I didn't. Simply in my free time I was looking at problems that had been presented in other editions to see a little how they were resolved and what could await me. For the national mathematics championship, I am going to have preparation with my teacher, Raquel Álvarez of advanced mathematics, at the Arenas Atlántico School », she anticipates.

«Representing the Canary Islands is a bit of pressure, I have some nerves, I have looked at the problems that they have put in other editions and they are a bit difficult, “he adds. Added to the help of his teacher is the constant support of her parents, and in special of his older brother Alejandro. «She has always supported me a lot, she explained to me topics that I did not understand and she expanded my knowledge. I am very grateful to him, he has been a great influence on me. In part I have achieved first place in the Canary Islands thanks to him»Explain.

To the preparation of the mathematics championship the double baccalaureate exams are added what is he studying and his other passion, playing the piano. “It is very complicated to combine everything, I have just the time but I tried to organize myself,” she details.

Javier He started playing the piano when he was only four years old.. «It helps me to develop my creativity and my imagination. In addition, it helps me relax and separate myself for a while from all the studies. I have always liked mathematics and it is also an entertainment for me. Something that I get to do in my free time », she relates. If he had to choose between mathematics and the piano, the young man has it clear. «A complicated decision the truth. I think that when it comes to opening doors for you in the future, mathematics is a better option. and the music would be more like a hobby entertainment," he says.

Although he still has two years to go to university, this young man who is passionate about mathematics already knows what he wants to do in the future. "At first My first option is to do Aerospace Engineering, I want to study in the Netherlands because there is a very good university and on top of that it is next to the facilities of the European Space Agency (ESA). The second option would be to study in the Peninsula, I am considering between Madrid and Seville, and then I would do a master's degree in the Netherlands. I don't know yet, I'll see. My educational future is outside the islands », she emphasizes. At the moment, he is focused on his International Baccalaureate studies and on leaving the Canary Islands at the top of the national mathematics championship.