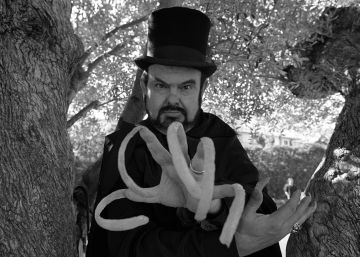 Of his 83 years, 71 passed them in front of (and behind) the cameras. Mojica, of Spanish parents, was born on Friday the 13th, in March 1936. Son of the manager of a cinema to the west from the city of São Paulo, at age 12 he received a gift camera from his parents and began his productions. At age 20, he founded a school of actors, already influenced by the horror genre. Mojica admitted using real spiders and other animals to test the value of the actors he hired, a practice he inherited from his films as an amateur.

Zé do Caixão was born 27 years after Mojica. The actor related that, in 1963, he dreamed of the spirit of an undertaker who ripped him out of bed and took him to the grave. The next morning, he began to tell the script of At midnight I will take your soul, the first film of its best known protagonist. In the movie, “Zé do Caixão” was the nickname of Josefel Zanatas, an intern from the interior of São Paulo who despised the Christian faith of the people, cursed the town and terrified the neighbors in their search for the woman who would give him the perfect son, killing everyone who stood in his way.

The journalist Ivan Finotti, co-author of Mojica’s biography with André Barcinski, says that the film’s own actors ridiculed the director’s character. With financial difficulties, he ended up selling the film at cost, but he managed to see how it became a great success in the cinemas of downtown São Paulo. It was then that the Brazilian director began to participate in international festivals such as Sitges, the one of Terror of San Sebastián and that of Nanterre, in France.

Two years after his first appearance, Zé do Caixão reappeared in Tonight I will incarnate in your corpse (which he would later consider his masterpiece) achieved a weekly program of horror stories on television and even starred in cartoons. The character reappeared in four other films, the last one The incarnation of the devil, in 2008. The latter took the prize for the best film of the young jury of the Sitges Festival. In 2000, he received the award for a career in Fantasporto, the fantastic and horror film festival in Porto (Portugal). In addition to his horror films, the director and actor ventured into more than 40 films, in genres ranging from the far west Until the erotic comedy.

American director Tim Burton (Eduardo Scissorhands, Nightmare Before Christmas, Sweeney Todd) He described it as “my greatest discovery of the genre” in the 1990s. “His films have remained in my memory as nightmares, but good times,” he said in an exhibition organized by the Museum of Image and Sound of São Paulo (MIS) in 2016. For actor Matheus Nachtergaele (Central Station of Brazil, City of God, Zama) called it the Brazilian ‘Charlot’. “Just as Charles Chaplin and his character, Mojica and Zé do Caixão inhabit our deepest imaginary.” Nachtergaele played Mojica in a series about his life.

After suffering a heart attack in 2014, his heart and kidney problems forced him to live a secluded life. In his last public appearance, in July of last year, he appeared on television with difficulties to speak and move, in need of help to eat and without his characteristic long nails.