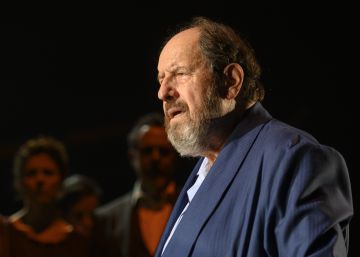 José María Pou It is one of the greats, in every way. Transcribing a talk with him is a tenth of what was discussed. When we met in 1988, I had just seen Speed-the-plow, by Mamet, in the Lincoln Center: from his enthusiastic and meticulous way of telling it, it seemed that he had directed it. His passions (theater, cinema, music) remain unchanged, as much as my difficulty in summarizing expansive interviews. This time I will only count the beginning. "I have 52 years of career, since I stepped on a professional stage, with Marat-Sade from Marsillach in October 1968. But I was always very clear that I was preparing to be the actor I wanted to be, and that this would come when I was in my 50s or 60s. I saw myself projected on the older actors. I always wanted to be one of them. It did not give the physique of a young man or interest me. It also didn't fit too much into the characters I was making then. I was aware, though, that my height gave me a certain power, an authority that I imposed on stage. They were not chimeras. My teachers told me: José Luis Alonso, Adolfo Marsillach, José María Morera. Even more: I knew it would be a slow road. That the first two thirds of my career would be a preparation or a way to reach the moment in which I would find myself being the interpreter I wanted. ”

He entered the School of Dramatic Art in Madrid. You cannot forget Manuel Dicenta, professor of diction and verse. And one of the first days, when I finished reciting, as an exercise, a fragment of the Couplets to my father's death, left him stunned when saying ‘This man recites Manrique better than me.’ "What a push! And if I tell it, it is not for pride, but to show his enormous generosity. ” I did Marat-Sade and the musical The Fantastikos, both during their vacations from the School.

In 1970, José Luis Alonso saw his graduation exams and hired him to work no less than in the company of the María Guerrero with Wolf Romance, which felt like his first authentic job. “There I met Bódalo and Alonso, who would be essential in my life. For me, the great reference was always José Bódalo. The best actor, the most complete, the most authentic that I have seen on our stages. Many of us think that he was touched by the gods, perhaps without being aware of it. And I was extremely lucky to work with him already in my third role. "

"Alonso and his wonderful company marked me much more than the school for their way of understanding the trade. If I am the professional I am today, it is thanks to those three seasons in which I became part of a family of 40 people, who lived in the theater 12 hours a day Actors and actresses from a great tradition: of course Bódalo, Ferrandis, Gabriel Llopart, Tote García Ortega, Luisa Rodrigo ... In the way of dealing with colleagues and following some work guidelines , I pay attention to everything I learned there. The fundamental thing: the discipline of the trade. Every day I spent more hours aware of the rehearsal from the patio, a couple of rows behind Alonso's management table, and seeing how they worked, because I still had small roles ”.

I tell you that Nathalie Poza uses the word “liturgy” from when he directed it in To the open sky. "I like it, because it is linked in some way to" ceremony. " The acting and the direction have a lot of vocation. So I learned there the liturgy of the office, and that this office is a ceremony every night. And that everyone is the celebrant. When I talk about belonging to a huge family, it is because I felt that all those who went on stage were my grandparents, my uncles, my sisters, my cousins ​​... family that I still love and of which I am still a part. Being part of the María Guerrero company had, I think now, something of Downton Abbey ... with the newcomers, who were the young, mixed with the great ladies, the aristocrats ... a conglomerate in continuous boiling. We entered at three in the afternoon, to rehearse the following performance; and then the two scheduled, at seven and at 10:45, and at about one in the morning the “supplication” often came, when the director asked you for a small rehearsal, of hour or hour and a half, to complement the pm. So you left the theater at three. Seeing rehearsals and performances gave you incredible theatrical wealth. On the same day you saw the same actors in different plays and roles. I repeat: I would not be who I am without what I learned from all of them ”. And this was only the beginning.