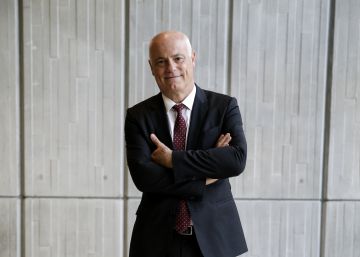 José Manuel Campa, (Oviedo, 54 years old), is one of the Spanish best placed in the international financial world. Since May he presides over European Banking Authority (EBA, for its acronym in English), the body responsible for building a single supervisory and regulatory framework for all EU banks, an "easier to say than done" task, admits Campa. The EBA has opened its headquarters in the exclusive La Défense district of Paris, after it left London for the Brexit.

Campa was Secretary of State for Economics with the PSOE between 2009 and 2011 and global director of Regulatory Affairs of Santander until his appointment. "I understand that some question my independence but we do not make decisions about banks but about regulation, which affects the entities, but we do not supervise them", warns by telephone this executive who charges around 200,000 euros a year free of taxes.

Question. There are more and more bank supervisors and regulators in Europe, so more money is dedicated to this work. Citizens have raised their demands after suffering an unprecedented financial crisis that has hit society. Should EBA improve reputation by being more efficient?

Answer. Yes, I think it can be improved; in Europe we have a complex structure for decision making but we believe it is essential to increase market information and transparency about banks.

P. Negative interest rates are the biggest claim of the banks because they say that they hit their profitability and that the positive factors are less than the negative …

R. It is true that rates affect their financial margin, but also reduce provisions, the cost of risk and economic improvement favors their activity. I think that banking would be better in a macroeconomic environment like the current one, of growth, with more positive rates; it is the scenario desired by all, also by the actors of monetary policy. But if the rates rise and also the delinquency, then it would not be so good.

P. Supervisors demand intra-European mergers to have larger banks, but would not this create financial giants difficult to rescue?

R. The problem with European banks is that their profitability is lower than the cost of capital: according to the latest data, the return on equity was lower than 7% and the cost of capital was 8%; 80% of banks have a profitability below this figure. The sector has to be more efficient by reducing costs, investing in new technologies and reducing existing capacity; that's where mergers come in. In a banking union there would be more integrated services, more synergies and efficiencies. If the merger achieves these improvements, the resulting bank is more profitable and offers better customer service, the operation is good. If bigger but more inefficient banks are built that can create systemic problems, that would not be good.

P. Banks do not see advantages in cross-border mergers because they do not believe they generate cost savings …

R. It is a reasonable point of view because the banks are locally implemented and it is true that in many cases there is no cost reduction because there are no overlapping networks, but there should be investment in technologies to access the new markets with less investment-intensive mechanisms. physical If the banks say this, it is because they will have their reasons.

P. In many areas, stress tests on banks are questioned. What are they for?

R. They guarantee a better and more homogeneous information to promote the stability of the financial sector and detect the vulnerabilities of the entities. In 2020 there will be new tests with small changes. In the 2022 exams, the repercussion of environmental problems will be more affected than now.

P. What is the best and worst of the stress tests?

R. The positive part is that they have provided much more homogeneous information among European banks. We are criticized for something that is not fair: not having detected banks with problems, but that is not the mission of the EBA, whose exams highlight the weaknesses of the entities. On the other hand, we believe that there should be more linkage and proximity in the time between the tests and the requirements that the supervisor then puts to the entities on capital, business model or restrictions on dividends, as in the United States.

P. In your mandate, will you be able to advance on these issues?

R. Yes, I want to give more homogeneous information about the banks and be transparent in the reasons that lead us to make decisions within the EBA.

P. Is the coordination of the EBA with the central banks of each EU country good?

R. The complexity is high because there are many issues that are under the domain of each country. We should complete the banking union to improve the coordination between the national authorities and the ECB, as well as between the supervisors and the resolution ones to avoid closed markets, which act as corralitos.

P. How far can the legislation against money laundering be improved, which is another social claim?

R. I agree that there is a social demand in this aspect and we should clearly improve, although we do not have a common regulation for Europe but rather directives that each State applies in its own way. We have five directives that establish a minimum regulation in the fight against money laundering. The creation of common regulations should be accelerated to be more efficient. The EBA has powers that are limited to increasing coordination and sharing best practices among the money laundering authorities.

P. Will there be improvements in your mandate?

R. It will be one of our priorities, but also the European Union should advance more in anti-money laundering regulations.

P. The Popular resolution criticized the lack of a mechanism for banks with liquidity problems and applied the system for insolvent banks …

R. The debate is on the table but in the end all the problems of an insolvent bank are manifested by a liquidity crisis. It was executed very well.

R. I'm not sure what it is to have more transparency, anyway the matter is under the judicial authorities and we can see it there.

Question. The bank complains of having a regulation more demanding than the fintech (small technology companies) and the bigtech (the big firms) when they work in similar businesses. They are right?

Answer. The challenge is to make sure that for the same activity we have an equal regulation, regardless of whether or not they are banks; the regulation must be neutral. We work to regulate payment entities and electronic money so that there is technological neutrality. The task is not easy because we are a banking authority and we regulate entities but now we can establish rules for an activity, whether banks do or not.

P. Is there evidence of this different treatment?

R. The evidence that the regulation is discriminatory is weak, but we have to be very attentive if the bigtech they take deposits so that the same regulation applies to banks.

P. Another claim is that entities are more obligated to transfer data from clients to technological ones than vice versa …

R. I think that right now the rule is more demanding for banks. The European Commission must follow this aspect very closely.