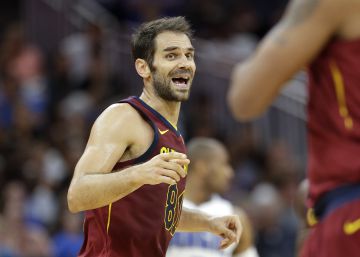 José Manuel Calderón He has decided to end his professional career as a basketball player. The Extremadura base, 38, is based in New York and was preparing on a court in Manhattan, New York, waiting for a possible offer from some NBA team. The court in question belongs to the National Association of Basketball Players NBPA. And the executive director of the union, Michele Roberts, has been the one who has convinced Calderón to join her as a special advisor, as published by The Washington Post.

“I know my weaknesses and I am always honest with myself,” says Calderón in the American newspaper. “I wasn't sure if I was going to be happy with the role I had last year. I wasn't playing, it just helped. I was traveling and I was beginning to miss my family a lot. I was watching a game the other day and didn't want to be playing, which makes everything easier. When is the right time to say this is all? [My withdrawal] is not official, but almost. It's time. Maybe in the next two weeks I will make an official announcement and present the documents. ” The Extremaduran player has confirmed to EL PAÍS his decision to leave the courts.

Calderón leaves behind a professional career that began in 1999 at Lucentum Alicante, when he was part of the generation of the Golden Juniors. But in Alicante he played as given by Tau, a team that captured him when he was 13 years old and played at Doncel, the team from his hometown, Villanueva de la Serena. Shortly after he went to Fuenlabrada and in 2002 he was recovered by the Tau, with whom he played the Euroleague final in 2005.

Concluded that season, he began his career in the NBA with Toronto Raptors. He settled down as the starting base of the Canadian team and became the first Spaniard to win a game in the NBA playoffs, against the Nets in April 2007. His progression was spectacular and he signed his best numbers in the 2008 season. 2009, with averages of 12.8 points, 8.9 assists and 2.9 rebounds. He played in seven NBA teams, Toronto, Detroit in two stages, New York, Dallas, Cleveland, Lakers and Atlanta.

He played the ‘playoffs’ in six seasons with five of those teams. And in between he shone with the Spanish team with which he won the gold medals at the 2006 World Cup, the Eurobasket of 2011, the Silver medals at the Beijing Games in 2008 and London in 2012, and the bronze at the Games of Rio in 2016, after which he decided to put an end to his stage with the combined Scariolo. Last season he played with the Pistons and his last professional match was April 22 against Milwaukee Bucks.

One of the most rocambolesque episodes in Calderón's career occurred in March 2017 when He terminated his contract with the Lakers to sign for Golden State Warriors. But just then Kevin Durant, one of the Warriors figures, was injured and the Californian team reconsidered his decision and cut Calderón's contract to sign an eave that could replace the American forward.

Calderón's career has been dotted with episodes of misfortune, especially due to injuries. A prominent member of the gold generation, he could not compete because of an injury in the 1999 World Cup, the first great success of that team. In the Olympic Games of Beijing, in which Spain won the silver medal, He suffered a muscle injury and could not play the semifinal against Lithuania or the final against the United States. In 2009 he was injured with Toronto and had to give up competing in Poland with the Spanish team that got the first medal in its history in a Eurobasket.

Opinion: Garay, Ferran … the strategy of discrediting the footballer

Betis: Rubi, with a splint and left arm in a sling, directs the Betis work session

Valencia CF: Caizares: “Valencia do not deserve these managers”