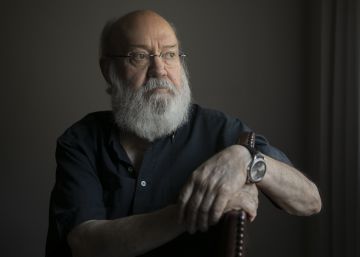 Miguel Rellán, who was an actor of José Luis Cuerda, he told Gonzalo Suárez the other day that there were fewer people giving gifts. Someone who came and said: "Today I have thought to be another in the cinema." Rope made those gifts. But not only did movie gifts.

Cuerda sowed vines to give away wines, became a producer to give away films made by others, became a film director to show the Church that he was a better inventor than God, and filmed, for example, Sunrise, which is no small thing to give history a unique piece of the art of energy to make fun of heaven and earth and solemn citizens. Each scene in that particular movie is a rescued verse from Dante or a phrase spoken by Plato in the ear of the bushes. I looked into the eyes of reality to transform it into a metaphor of foam or mud. That movie has its signature, as if it signed a canvas of Bosco. A movie that was a hand painting. Rope's hand.

Cuerda liked to see happy people around him. Although as anyone displaced his own ego as a citizen and artist, he spent the day thinking about how to help others be happier with their gifts. When I couldn't do them in movies, I made them in books, on Twitter, in conversations, in the joy of sharing wine. Like Domingo Savio (and like Rafael Azcona) he was the first to get to the appointments, and although he was in the Ribera Sacra or Albacete, it always seemed that he was next. And, even if he didn't come, he always had some supernatural way of manifesting himself.

He spent his life saying yes, and always seemed to say no. His way of saying yes was his way of making unexpected gifts. One of those splendid days of Cuerda and of friendship I saw that he had an appointment with his friend Rafael Azcona with a huge package, like an old record player. And where are you going with this? "A gift". "Only a madman like you can still give gifts." They were like children, until they imagined together. Then there were two geniuses whose head gave them the happiness of being from another world.

One of those times when fullness was a gift that they gave together they conceived, with the productive impulse of Fernando Bovaira (who was an eldest son, like Alejandro Amenábar), The tongue of the butterflies, from stories by Manuel Rivas. That was a poetic gift to the civil manifesto of historical memory. They took care of that film as if it were a sonnet, to tell him what they both felt, from different distances of age: to Azcona, wounded in history by the La Rioja shortage in the Republic, that terrible fable told by the Galician poet It was exactly in the part of the heart that has memory. And Cuerda tuned in to that difficult music because, in the long postwar period, there continued to be, also in his Manchego land, teachers with their faces crossed by those stones.

He gave away movies that happened inside his imagination and his dreams. Sunrise, which is no small thing, What happens to the history of cinema as a beautiful surrealist object, is one of those descendants of his. Cuerda is that movie, the music of a rebel who was both a painter and a poet, a genius who whispered gifts.