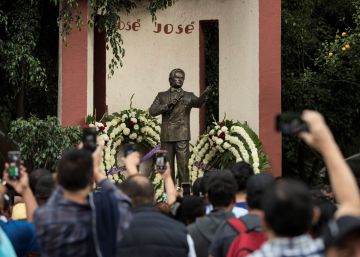 For Miriam Soberón listen to the songs of Jose jose It is a form of purification. A purge of feelings with songs of heartbreak. This Saturday afternoon, just a few hours after the artist's death, this 54-year-old woman, pale complexion and reddish hair, watched in the distance the statue of the Mexican singer, who died a few hours. He was 71 years old and still a lot of art in his veins. But Pancreatic cancer has taken one of its myths from Mexico. "The song of Pillow It reminds me of my divorce, 23 years ago, "Soberón says as he follows the song with his head.

He Prince of the song, as it was nicknamed in Mexico, He died in a hospital in South Florida (United States), more than 3,500 kilometers from Clavería, the neighborhood of Mexico City that saw him grow. There, the fiberglass figure that has repeatedly tried to steal, continues to preside over the small park of La China, a step away from what was his home, at number 32 of Tebas street. The place has become this Saturday a sort of pilgrimage place for its unconditional: more than 300 people delivered wreaths of flowers and, in return, took a couple of selfies. They also reopened old love sores. "Jose jose It is an icon of the Mexican song. A phenomenon by that timbre of voice, very neat ", narrates the woman. Over the years, that privileged voice was extinguished, largely, by cortisone injections with which he tried to alleviate his depressive tendencies.

In little more than three years, the North American country has lost two of its great references of the song. The fulminating death of Juan Gabriel In August 2016, he took thousands of Chilangos from their homes who, between mezcal and tequila, mourned his death in Garibaldi Square, the main Mariachi area in Mexico City. With José José, sadness moved to Clavería: there was no other place that showed its essence more than its own neighborhood, at the same time who returned four years ago to sign autographs. "He looked bad, but he was always very kind to us," says Soberón.

In front of the sculpture, a group of singers met this Saturday to take advantage of José Rómulo Sosa Ortiz, the true name of the artist, in the best possible way: with his musical legacy. "If you leave me now, I will not be able to survive," Norma Juarez, 58, sang while trying to record the melody with her cell phone. "He was the nightingale of romance!" He says without taking his hands off the device. In Clavería, José José listened - hidden from his father, who required him to listen to opera and not popular music, as he wrote in his autobiography This is my life (2008)- the songs of José Alfredo Jiménez, another of the largest of the soundtrack south of the Rio Grande.

José José has a reserved place in the script of the Mexican parties: almost at sunset, when the bars are about to close, his prodigious velvety voice appears. "When we are going to get sad we say: 'You have to drink like José, José'. A glass of Bacardi (rum) ...", says Ildelfonso López, 46, with a scruffy mustache. "I've been drunk a few times listening to it, especially with The sad, with which we grabbed the party, "adds young Enrique Zavala." As a child I listened to his songs, but it was when I started growing that I made sense. The heartbreak! ", Daniel Arrellano completes as he turns to see his girlfriend, Diana, sideways.

The voice and lyrics of Jose jose they marked the Mexico of the seventies, but they cross across the generations in Mexico: grandparents, children and grandchildren have vibrated, indistinctly, with the Prince of the song. The wave of offerings to Clavería's artist, that of melancholy, is just beginning.