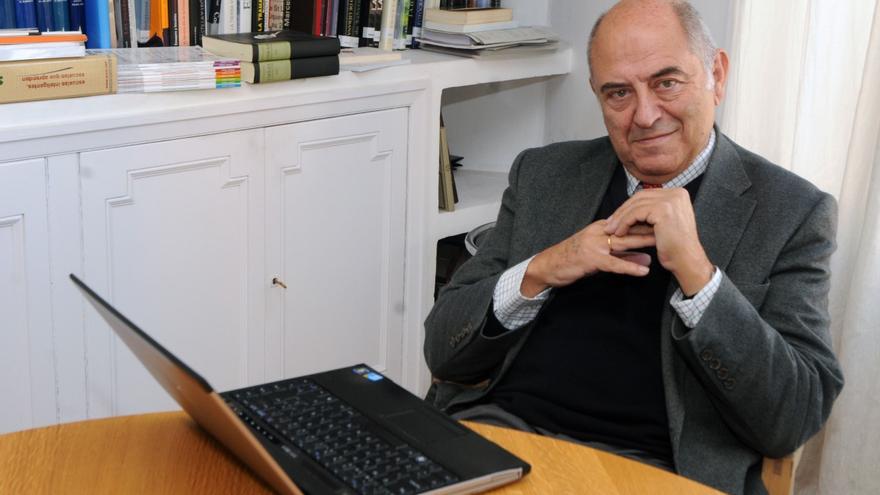 After writing with Javier Rambaud a History of Humanity, José Antonio Marina (Toledo, 1939) returns with Biography of inhumanity, Posted by Ariel. A lucid and passionate examination of the dark side of people to find the mechanism that makes civilization give way to barbarism.

I would like to start by questioning the ‘inhumanity’ of the title of your new book, referring to the atrocities that men have been able to do against themselves. But isn’t cruelty human?

Cruelty is exclusive to man, but in this case we allude to the fact that the person who loses compassion is called inhuman. That inhumanity of the title would be the opposite that defines the content of Humanity, being compassionate. Someone can behave inhumanly while still being human.

Hasn’t the concept of inhumanity changed over time? What once could be normal, today seems frightening to us …

In Humanity, there has undoubtedly been an ethical progress that is shown in many things: the abolition of slavery, the universality of Human Rights … They are not fully completed achievements, it is more of an ascending line than a achieved plateau. But let’s think, for example, that today it would seem frightening to celebrate the execution of a prisoner in the middle of the street, while there were companies that bought prisoners from others so that executions would not be missed. And in Bruges there was a time when they complained that the executions were too fast. And with the pain of the animals, I don’t tell you anything … We have changed a lot.

Is there a time when that transformation was most evident?

From the Enlightenment there is a very remarkable evolution. Suffice it to think that until 1812 torture was allowed in Spain as a judicial procedure to extract a confession, and until 1890 slavery was admitted. We learn very slowly, that’s the truth. However, the process is constant, and we have made progress on almost everything. Who would say, for example, that we would reach the levels of schooling that exist today.

He speaks in his book of a law of ethical progress of humanity. Why, then, are there such brutal setbacks in freedoms and rights?

That is the big question: Why do we suffer civilizational collapses? Why does everything collapse and we lead to atrocity? If we investigated that movement, those mechanisms that lead us to be cruel, if we learned from history, maybe we could avoid it.

You dedicated a book to one of those mechanisms, fear. What role does this play in the development of inhumanity?

It is a very useful emotion, that is why it has been kept in evolution. It alerts us to dangers, but at the same time it can provoke exaggerated, baseless, invented, induced fears. It is a very easy to use tool to manipulate human beings, with many consequences, such as the desire for revenge. The person I am afraid of sometimes becomes my enemy. And a downward slide unfolds that can go as far as horror.

We believed that coexistence was a guarantee of peace until at the end of the last century we saw in the Balkans or Rwanda how that can sink, don’t you think?

That is precisely one of the topics that most interests me. In the belle epoque, at the beginning of the 20th century, everyone was convinced that the wars were over. And they thought about it in a very rational way: in a world very interconnected by commerce and industry, if someone started a war, it hurt the whole system. Who could want something like that? But rational behaviors disappear, and irrational behaviors emerge, in which everyone is going to lose. Ideological issues, blind emotional movements such as fear, hatred, make people throw the blanket over their heads and enter a perverse dynamic. When you study History, you see that all societies have had to control aggressiveness, which is a torrent that, if it gets out of hand, sweeps everything away.

How have they done it?

Building three dams. The first is an affective prey: fostering compassion, generosity, altruism, respect, all of which work quite well. But the human heart can be influenced and all that can disappear. The second dam refers to the moral, legal, religious systems, which come to tell us: we are going to behave decently. When that too collapses, we have the third dam: institutions. And if that fails, then the torrent already ends at the lowest part, in repulsive acts, concentration camps, massacres, massive rapes of women. The question then is: was everything we had built a pure moral coating? Well, on many occasions yes. That is why you have to be very vigilant. The same must be done with our institutions. That now the political fight is so fierce, that environmental aggressiveness, does not mean that democracy is going to collapse, but we should review those signs and take action.

One of the great paradoxes of history is that the most cultured and widely read society in Europe led to Nazism. Wasn’t culture the highest expression of humanity?

It seems very important to remember it. George Steiner said that the great scandal is that what we understand by culture does not improve people. What it does is an aspect of culture, the social capital of a society, its ethical structure. But five-star culture, art, music, doesn’t necessarily make us better. The same Nazi hierarchs who raved about the Ninth Symphony were deaf to the complaints of its victims. There is a very interesting kind of elitism there, hence the need to see the cracks that I referred to earlier.

Torture, which like slavery we consider eradicated, reappears in phenomena such as Guantánamo or Abu Grahib. How does a civilized society tolerate such a thing? Is it inevitable to preserve islands of cruelty, even geographically delocalized?

Of course, in this book I emphasize the warning of how we can naturalize things that when we are cold, horrify us. A particularly bloody case, from what has been studied, is the use of torture during the Algerian war by France. There was even a general who defended torture. The French school of torture is the one that trained, in quotation marks, all the people who would do horrors for Pinochet. What worries me is that when you see any of those horrors, you wonder who does that? Are they psychopaths? I wish! But they are normal people, it’s your next door neighbor.