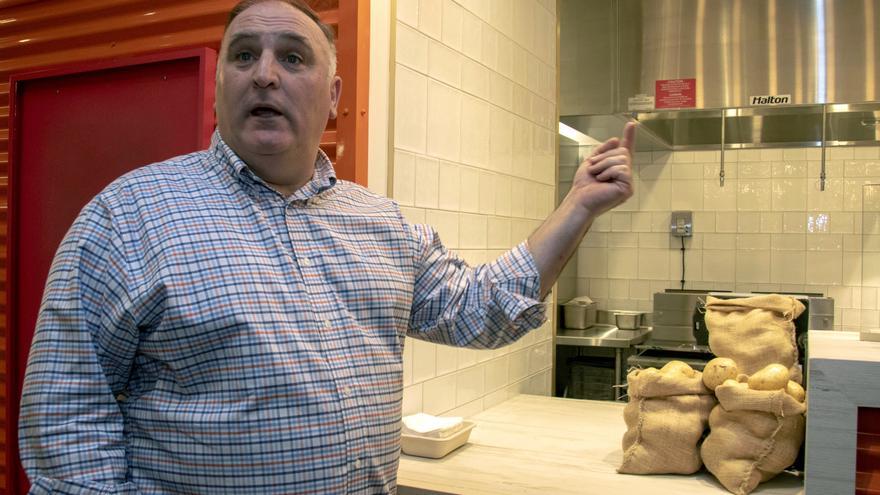 Asturian and with Spanish cuisine as a flag, José Andrés is also in love with the United States, country in which he settled 28 years ago and from where has built a gastronomic empire but also solidarity, which has been worth the 2021 Princess of Asturias Award for Concord.

Born in the town of Mieres on July 13, 1969, José Ramón Andrés Puerta was attracted to cooking and in 1985 he went to Barcelona to study at the School of Catering and Hospitality.

Between 1985 and 1988 he carried out an internship in restaurants such as El Bulli, where he became a disciple of Ferran Adriá, one of the chefs who has most influenced him and with whom since 2019 he shares the Little Spain Market in New York, a great culinary space of 3,000 square meters.

But before, after finishing his studies in 1993, se went to USA, where he worked at the El Dorado Petit restaurant (New York), before opening that same year, in Washington, the restaurant “Jaleo”, specialized in tapas cuisine.

Known as the ‘boy wonder of culinary Washington’, is considered the main exporter of Spanish cuisine to the United States and he is responsible for the introduction of the tapa concept there. Since 2012 he has been dean of the International Culinary Center of the United States.

But despite his roots in North American lands, José Andrés had problems with the then Republican presidential candidate and later US president. Donald trump, which in 2015 claimed him $ 10 million for breaking a deal to manage a restaurant.

The Spanish chef made that decision after Trump’s xenophobic comments about immigrants. Two years later they reached a “friendly” agreement, the details of which they did not disclose.

Candidate on several occasions for the prestigious Outstanding Chef, the Asturian chef has received numerous awards.

In 2003, he won the award for Best Cook in the US Atlantic Region from the James Beard Foundation.; He was named a Gastronomic Personality by the Royal Spanish Academy of Gastronomy in 2007 and in 2011 he received the award for the best chef of the year in the United States.

Member since 2010 of the US Government Travel and Tourism Advisory Council, in 2014 he was recognized by the Citizenship and Immigration Service with the American mention for his achievements as an immigrant in that country and that year he was awarded in Spain with the Extraordinary Food Award of Spain 2012 and the ICEX Award “Exporting Spain” of Madrid- Fusion.

In 2015 the Minister council awarded the Medal of Tourism Merit for Internationalization and that same year he was awarded by the Congressional Hispanic Caucus Institute as an outstanding example of the Latino community and the nation and designated “presidential ambassador” of the “Stand Stronger” campaign, led by President Barack Obama, who in 2016, He was awarded the National Medal of Arts and Humanities.

Also in 2016, the chef achieved his first two Michelin stars for his Minibar in Washington.

2018 Humanitarian Award from the James Beard Foundation and 2020 Peace Prize from the Barcelona Provincial Council and the Association for the UN in Spain, in 2018 Time magazine included him among the one hundred most influential figures in the world.

Since 2010 he has been in charge of the humanitarian project World Central Kitchen (WCK) with which he has carried out aid missions to more than a dozen countries, already distributed five million meals and gathered about 45,000 volunteers.

With this project, he traveled to Oakland (California) in March 2020 to provide meals to the passengers of the Grand Princess cruise ship, quarantined by the covid-19 and for the same reason, his solidarity kitchen participated in Spain then to help families in situation vulnerability

In January 2021 in Madrid, he prepared thousands of menus for Madrid health and emergency personnel, as well as vulnerable people or people at risk of exclusion from the Villa de Vallecas district after the passage of the Filomena storm.

Days later, on January 20, he participated in the inauguration ceremony of the president of the United States, Joe biden.

For his solidarity work, in October 2020 he was one of the winners of the National Hospitality Award.