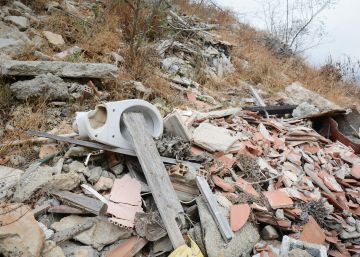 The Prosecutor of Malaga has requested two years in prison and 18 months of disqualification for the mayor of Nerja, José Alberto Armijo (PP), for a crime against natural resources and the environment, the same penalty he asks for the councilor for the environment of said city hall, María Nieves Atencia. The document of the Fiscal Ministry highlights the existence since 1998 of an illegal landfill of three hectares and 800,000 cubic meters located next to the Miel River and within the Sierra de Tejeda and Alhama Natural Park, where both municipal operators and companies associated with the City Council carried out spills “apparently without any sort of classification or separation”. This involved a risk of contamination to the natural environment, but also of fires and safety for people, according to the document, which also accuses seven other businessmen who claim equal jail time and disqualification. In addition, the prosecutor requires a fine of 7,200 euros per person.

The case, in the hands of the Court of Instruction number 1 of Torrox, started in 2016 after an investigation carried out by the Nature Protection Service (Seprona) that served to uncover, in summer 2017, the operation Rubbish. Now the Prosecutor’s Office points directly to José Alberto Armijo, Mayor of Nerja since June 2019 – and between 1995 and 2015 – and the Councilor Delegate for the Environment in the municipality in 2011 and 2015, María Nieves Atencia, because he endorsed the decisions of the councilor Regarding the landfill. It is the second open legal front that both have, since last week they declared in another case also related to the environment: that of sewage discharges to the sea due to the lack of management in the waters of the municipality, which still lacks a treatment plant.

Rosa Arrabal, mayor of Nerja between 2015 and 2019, has been left out of accusation because, according to the document, she has not been accredited to have knowledge of the landfill, its “harmful” potential and the need for closure. The same has happened with two former councilors of the environment of the coastal town and a position of the Junta de Andalucía.

In its conclusions, the prosecutor says that the landfill constitutes “a high risk of altering the balance of the natural systems of the environment.” Also that the uncontrolled deposit of waste entails a “concatenation” of “serious breaches” of the environmental protection regulations generating risk of systematic alterations of the natural environment. A pollution that will be “increasing over time.” In short, there is a risk of causing “substantial damage to the quality of water, soil, plant formations, associated fauna and even the health of people.” For all these reasons, it accuses a crime against natural resources and the environment to the two public offices Nerjeños, seven businessmen and six companies related to space management, finally closed in September 2016.

To reach these resolutions, the Prosecutor reviews in a detailed writing all the events that have occurred since Armijo allowed the discharge of debris in 1998 “without classification criteria” in an old aggregate quarry. This, despite the fact that “during the years 2000 to 2010, the complaints and disciplinary proceedings of the Territorial Delegation of the Environment in relation to the activity of the landfill took place,” the prosecutor’s brief relates, despite which the deposit of various materials “continued.” In fact, environmental agents in 2013 verified the existence of pruning remains, parts of vehicles, debris, asphalt, plastics, irrigation equipment, chemical containers, furniture or fixtures. And they also issued a report in which they alerted the absence of control of waste, the threat to endangered flora, the risk of fire, air pollution and water resources, as well as the lack of stability of the accumulated mass, in other aspects.

All this, according to Seprona, on a public land that 90% forms part of the Sierras de Tejeda, Almijara and Alhama Natural Park and is owned by the Nerja City Council. The Civil Guard data indicated that about 100 trucks entered the site every month to dump some 1,500 tons of rubble, as well as another 30 with 180 tons of pruning remains, excavation lands or greenhouse plastics “all coming from the City Council of Nerja. ” A spill that was carried out “indiscriminately and without any criteria”, mixing all the elements with each other and violating numerous rules.

how to relate without contagion risk