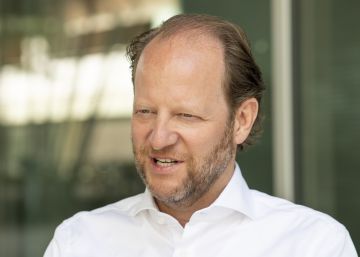 It has been reciprocal love at first sight. From BME it is considered almost as a merger rather than an absorption. And the executives of the Swiss stock exchange manager, with Jos Dijsselhof (Zwolle, Netherlands, 1965) as CEO, have piloted the acquisition of the Spanish stock exchange manager with lead feet.

His great mantra is that it is a strategic operation in which everyone wins and also ensures that BME employees have nothing to fear for the future.

The current acceptance rate, despite the fact that there are still days until the final date, June 5, is high, and he hopes that it will far exceed the 50% required by the takeover bid. Each shareholder is entitled to receive 32.98 euros per share. Hedge funds, with around 20% of the capital, will not be a problem for the offer to succeed, according to Dijsselhog. Another question is whether BME will continue to trade; if it does, the logical thing is that its price falls.

The takeover bid was announced in November last year. This is the final stretch. How are the acceptances?

Many investors wait until the last days to decide, making it difficult to anticipate final acceptance. But in general, we have maximum confidence that the minimum of 50% will be exceeded.

If the situation is so favorable, why was the acceptance period extended?

We took into account the situation in Spain [en el periodo de alarma y con la movilidad de reducida] and we extended the deadline so that small investors could make the decision calmly. It is only fair: to give them the opportunity to make the decision in a situation as normalized as possible.

BME has a high percentage of the capital in the hands of small investors. Around 60,000 shareholders control between 35% and 40% of the capital. What are they doing?

Most retailers are accepting the offer, yes.

At a level that allows BME to abandon the Stock Market? The brochure specifies that it will not be excluded unless individuals are left with less than 5% …

I do not know. It all depends on the percentages that are achieved. Depending on the level of acceptance and commitments, we will make a decision. It may not make sense to keep a low percentage trading, but it would if it were high. But we will have to wait for the outcome. It is also a possibility, for the future, that Six is ​​listed in Spain.

Are they having problems with the ‘hegde funds’ that have been entering the BME and that have around 20% of the capital?

Everything suggests that they will accept the offer. The reasons why they have entered are mainly for profitability and the logical thing is that they sell in the takeover bid. We do not see any problems with these shareholders going forward.

Is an offer from a competitor, such as Deutsche Börse or the manager of the Hong Kong Stock Exchange, HKEX, still possible?

We have always thought that the combination of Six with BME is the best possible. We will be strong in various markets, we will be strong as a company, with a remarkable size, we will be strong for our clients and for our workers … I consider this to be the best operation for all stakeholders [todas las partes interesadas]. I understand that at this moment it is extremely difficult for a competing offer to be presented.

The CEO of Euronex, who was maneuvering to compete with Six for BME, assures that the Spanish group has broken the European tradition that Spain had since 1978. What do you think?

We have done our work, our calculations. The combination of BME and Six will result in a spectacular, extremely powerful company, more than people can imagine. The price is fair and it is also a strategic purchase. We are a very rigorous company, we only buy when we believe that the operation is positive.

Have you spoken to worker representatives as claimed in a statement on April 7?

I will speak to them as soon as the transaction is closed. Although Javier Hernani (the CEO of BME) has been in permanent talks with them, and he with me.

Should they be afraid of possible cutouts?

No, absolutely not. We are going to make some changes to the company to improve it, but these changes do not include deep job cuts. Ultimately, the combination of both firms will result in more people employed in the group.

Six’s plan was to bring the clearing area to Spain [compensación de todo tipo de instrumentos financieros]. When are you going to do?

That is a segment that makes sense to move to Madrid, and we said so. But now, once the operation is closed, a deeper analysis of what is most appropriate for each area will be necessary.

There have been some criticisms regarding the bonuses linked to the success of the takeover bid. For example, Javier Hernani will pocket 1.87 million. It’s fair?

I think that BME’s advice is extremely professional and they have demonstrated this. I would not say that it is unfair, but in any case I have not been part of the decision to deliver that bonus. Although it is obvious that Javier Hernani has had an important role in the search for the best operation for the company he leads.

What will be the role of Javier Hernani in the new group?

Javier Hernani will be part of the Executive Board [el máximo órgano de dirección de la compañía] and will continue to be the CEO of BME. He will be part of my senior team and will be a fundamental person who will pilot the combination of Six and BME and report directly to me.

The takeover booklet specifies that Six will study adjusting the dividend. What is going to happen?

The objective is to normalize the high percentage of the benefits that BME distributes [alrededor del 90%] towards the Six [que distribuye en torno al 60%]. But it must still be discussed.

How has the process been with the Government?

The Spanish Executive has been exceptionally professional with the transaction. The behavior of BME’s management has also been commendable throughout the process.