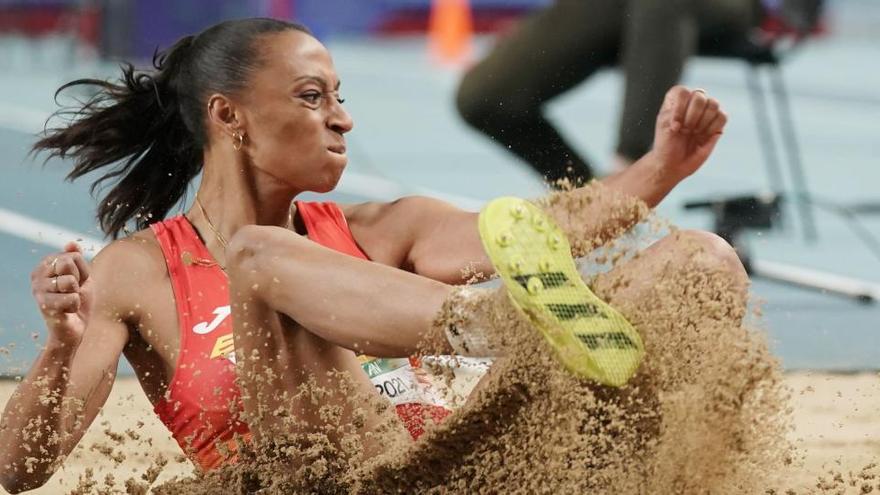 Ana Peleteiro Y Jorge Urena, champions two years ago triple jump and heptathlon, put a silver clasp this Sunday to a great Spanish performance in Europeans on indoor track in Torun, Y Adel Mechaal he joined the party with a bronze in 3,000 meters.

The three medals of the closing day joined Óscar Husillos’ gold in 400 and the bronze of Jesús Gómez in 1,500 to finish off a harvest of 5 metals, one less than in Glasgow 2019, with a renewed team of 36 athletes that reflected a complete parity: 18 women and 18 men.

Peleteiro yielded his triple crown, by a single centimeter, to the Portuguese Patricia Mamona, new champion with a mark of 14.53, a Portuguese record. He leaves, however, with the silver medal and the fourth best jump of his life.

The Galician equalized in her last jump the record of the German Neele Eckhardt (14.52), but won the silver medal thanks to her second best jump: 14.34 compared to the Germanic 14.18.

With the memory of his victory in Glasgow with a record of 14.73 meters (Spanish record), Peleteiro was slow to get into the fight for the medals, unlike Mamona, who dominated from his first jump.

European Champion in 2016, the Portuguese athlete opened with 14.35 and improved to 14.53 in the third round -Portuguese record-, while Ana Peleteiro started with 13.98 and two nulls.

A jump of 14.34, her best record of the year, put the Spanish one centimeter behind third place, which was held by Belarusian Viyaleta Skvartysova.

But the Spanish, in the purest tradition of her coach, the Cuban multi-time world champion Iván Pedroso, took advantage of his last cartridge to win the silver medal and even scare the Portuguese.

Ureña remained on the pentathlon podium for the third consecutive edition and only yielded to the best in the world, Frenchman Kevin Mayer, world record holder for decathlon and European heptathlon, who won the combined with 6,392 points, compared to 6,158 for Ureña and 6,133 for Polish Pawel Wiesiolek.

Four days after the second anniversary of his European victory in Glasgow with 6,218 points, Ureña, who had also won a silver in Belgrade 2017, achieved his goal of staying on the podium.

The 3,000 final gave Spain a bronze. Two days after winning the 1,500 title, the Norwegian Jakob Ingebrigtsen, the best European mediofondista since the time of Fermín Cacho, finished an unprecedented double in the Europeans indoors by winning 3,000 ahead of Belgian Isaac Kimeli and Adel Mechaal.

Katir, who had been chasing Ingebrigtsen, gave in in the last few meters and was 25 hundredths from the podium.

The closing day presented in society a budding figure of the 60 m hurdles, the 20-year-old from Pamplona Asier Martinez, who in his debut with the senior team finished fourth, just 4 hundredths behind the bronze medal.

The French Wilhem Belocian took the gold with 7.42, the British Andrew Pozzi – world champion – the silver with 7.43 and the Italian Paolo Dal Molin the bronze with 7.56, followed by the Spanish champion, who set a personal record with 7.60.

The Navarrese runner brilliantly covered the drop in the team of the best Spanish hurdler, Olympic runner-up Orlando Ortega, who, with physical discomfort, resigned from these championships so as not to compromise his preparation for the Tokyo Games.

I said it weeks ago and I’ll tell you again today, I take my hat off to you @ ASIERMARTINEZ17 congratulations champion, often carreron 👏🏾🙏🏾👌🏾

Ortega congratulated the young Navarrese hurdler in a tweet: “I said it weeks ago and I will tell you again today, I take my hat off to you @ ASIERMARTINEZ17. Congratulations champion, what a rush.”

Spain returns from Torun tenth in the medal table and with thirteen finalists (two less than in Glasgow 2019): one gold, two silver, two bronze, four fourth places, one fifth, two seventh and one eighth. In short, fifth in points, only behind Great Britain, Poland, the Netherlands and Germany, out of 47 countries.