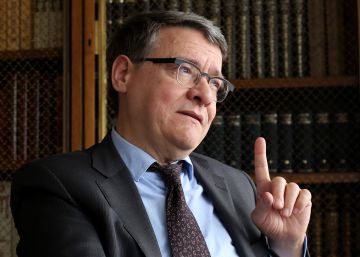 Jordi Sevilla plans to present the resignation as president of Red Eléctrica before the board of directors of the public company, 20% owned by the State Society of Industrial Participations (SEPI), It will be held this Tuesday. The former Socialist minister has been maturing a decision for several days due to the lack of understanding with the Vice President and Minister of Ecological Transition, Teresa Ribera. Finally, on Sunday he adopted the decision since the differences with the minister had worsened in recent months. According to sources close to Red Eléctrica, Ribera considered the public company almost as a general deputy director of the ministry.

Sevilla plans to communicate its decision to the board of directors of the public company on Tuesday. He will abandon his responsibilities without charging compensation, according to sources familiar with the matter, because he resigned from it when he reached the position. Compensation used to be a year’s salary.

Seville, who was Minister of Public Administration (2004-2007) in the Government of Rodríguez Zapatero, He was appointed president of Red Eléctrica instead of José Folgado (who had taken office in March 2012) in the summer of 2018, after Pedro Sánchez arrived in La Moncloa. The socialist politician, who charges about 546,000 euros gross per year at Red Eléctrica, had coordinated the economic program of the PSOE for the 2015 and 2016 elections commissioned by Pedro Sánchez.

Sevilla (Valencia, 1956), has been vice president of the consultant Llorente y Cuenca, has a degree in Economics, an opposition official and a member of the Superior Body of Commercial Technicians and Economists of the State since 1983.

Militant of the PSOE, he was advisor of the socialist parliamentary group in Congress (1998-2000) and secretary of Economic and Occupational Policy of the federal socialist executive commission (July 2000-July 2004), with José Luis Rodríguez Zapatero as general secretary.

Throughout his professional career in the Administration he has been head of the Technical Assistance Section in the General Directorate of Foreign Transactions of the Ministry of Economy and Finance (1983); territorial deputy director in the Territorial Directorate of Economy and Commerce (1983-1985), in Valencia; and head of the Service of Hortifrutícolas Products and Oils in the General Direction of Foreign Trade (1985).

Between 1985 and 1990 he was an economic advisor to the cabinet of the Presidency of the Government and chief of staff of the Minister of Agriculture from 1991 to 1993, a portfolio that Pedro Solbes then occupied, with whom he was also chief of staff in the Ministry of Economy and Finance since 1993 to nineteen ninety six.

He was also an economic advisor to Joaquín Almunia during the stage in which he was secretary general of the PSOE (1997-1998).

On March 12, 2000, he was elected deputy by Castellón, in the seventh legislature, in which he was spokesman for the Economy of the PSOE in Congress, member of the Permanent Delegation and member of the Infrastructure commission.

He was one of those responsible for the drafting of the socialist electoral program for the elections of March 14, 2004, which won the PSOE and in which he was again elected deputy for Castellón.After the socialist victory he was appointed Minister of Public Administration of the Government José Luis Rodríguez Zapatero, a position he left in July 2007 and in which he was replaced by Elena Salgado.