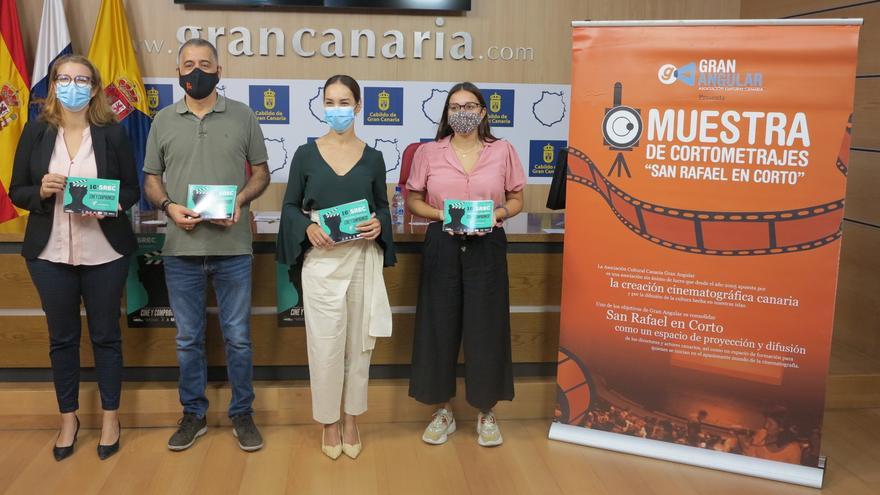 The 16th edition of the San Rafael en Corto Festival (SREC) will exhibit from November 7 to 13, at the Víctor Jara Theater in Vecindario, a total of 111 short films throughout its eleven planned official sessions, which this year will take place under the denomination ‘Cinema and commitment’.

This year, the Gran Angular Cultural Association has received a total of 450 works from more than 30 countries, of which more than 80 have Canarian origin (more than 65 percent of its program) and more than thirty are directed by women. The foreign films on the program come from countries such as Indonesia, France, Brazil, Mexico, Russia, USA, Iran, Chile, Guatemala, Cuba, Hungary, South Korea, Ecuador, Argentina, India or Turkey, among others.

The aforementioned festival, which was born with the intention of serving as a platform for the dissemination of the work of new filmmakers from the Canary Islands, was presented today by the Councilor for Culture of the Cabildo Gran Canaria, Guacimara Medina, the Councilor for Culture, Identity and Solidarity from the Santa Lucía City Council, Yaiza Pérez, and the contest director, Agustín Domínguez.

For Guacimara Medina, SREC is one of the consolidated festivals in the Canary Islands in the field of the audiovisual sector. “It is a bid to disseminate the work of new Canarian filmmakers, which pays special attention to the work of the directors, who in this edition represent more than 65 percent of their programming,” said Medina, whose edition “continues to work for auteur cinema, non-commercial, social cohesion and the search for different realities through consciousness and visual experiences ”. For her part, the Councilor for Culture of Santa Lucía de Tirajana, advanced that “it is no coincidence that this short film festival arises in this municipality, since what the selected works transmit focuses on the denunciation of social injustices and the violation of of human rights that occur in different parts of the world, issues that are in the DNA of Santa Lucía where Espal has just been celebrated ”, he recalled.

Agustín Domínguez, director of SREC, emphasized the dimension of this festival that serves “as a meeting place for alternative Canarian cinematography”. It will possibly be the most austere event of all those that take place in the Archipelago, but “carried out from the heart and with the aim of valuing the cinema as a tool for dissemination and denunciation of the situation of the oppressed peoples of the planet and their realities, as well as well as the violation of human rights that is systematically practiced against its inhabitants ”.

Among the most anticipated short films offered by the SREC program is the 65-minute work of journalist Jordi Évole and Ramón Lara, ‘Eso que tú me das’, which includes the last confession of the life of the musician Pau Donés two weeks before his death and which was recorded at his home in the Vall d’Aran. Évole will keep streaming a meeting with the public after the showing of his film that has been seen by more than 200,000 viewers in Spain.

In addition, on the opening day, the 18-minute documentary by Carles Bover Martínez and Julio Pérez del Campo, ‘Gaza’, which won the Goya Prize in 2019, will be screened. The documentary is a trip to Gaza that allows us to learn about the violation of human rights and the blockade and post-war situation in which the Palestinian population survives in the so-called Gaza Strip. Another protagonist of the 16th edition is the Asturian journalist Javier Bauluz, the first Spanish photographer to obtain the Pulitzer, who presents ‘El Calvario de Mari’, which tells the story of a 72-year-old Asturian woman who, at 34, became a widow, with 10 children, a pension of 60,000 pesetas and an eviction order.

Likewise, SREC will screen ‘Nom’, the horror short by Ángel Hernández from Gran Canaria that won the award for best film at the Hellbound Horror Festival. Nom, which has been selected in more than 120 festivals around the world, is a disturbing film shot with a simple but effective style, which generates a great atmosphere of terror in daylight and in open spaces, something that many horror tapes avoid. Shot with a 500 euro budget, no member of the production team is professionally dedicated to cinema, which highlights the merit of its remarkable success.

Another canary, Adrián González, presents ‘The chair in front of the window’, the most personal short film of his filmography, which won the audience award last April at the 21 Islands International Short Film Fest in New York. The film, playing with metaphors and surrealism, makes the audience travel through uncertainty, pause and fear.

In the new edition of SREC, education will once again become a transversal axis of its programming, with the celebration of the school initiatives ‘Cinema with class’ and ‘Cinema with education’, aimed at 1,200 Primary and Secondary schoolchildren, in which section two works will be screened. The first, by the brothers Guillermo and Javier Fesser (filmmakers of ‘Champions’, among others), ‘The invisible monster’, a delicate and moving short film shot in 2019 on the island of Mindanao (Philippines), which approaches from the perspective of a child the tragedy of childhood hunger. The second, entitled ‘The music of recycling’, is directed by Manuel García Serrano and inspired by the work of a youth orchestra made up of minors at risk of social exclusion from marginal neighborhoods of Madrid, who participate in a unique inclusive project that supports the Ecoembes Foundation.

Both the Fesser brothers online and García Serrano, who will be in person at the Festival, will participate in streaming in the talks they will have with the students from the different schools in the municipality who have shown their interest in the experience.

The 16th edition of SREC will take place at the headquarters of the Víctor Jara de Vecindario theater with the presence of the public, since the organization of the aforementioned festival has the approval and corresponding authorization of the General Directorate of the Canary Islands Health Service of the Government of the Canary Islands . The screenings will be free, although the public must withdraw the invitations for each of the sessions provided on the portal www.entrees.es, as of November 4, from 09.00 in the morning. During the first fortnight of next January, the winners of the 16th edition of SREC will be exhibited at the Guiniguada theater in the capital of Gran Canaria.

SREC will conclude on November 13 with the screening at 9.30 p.m. of the festival’s record and with the delivery of the ‘Camarito’ to the directors present at the screening that will make up said record of this 16th edition, in whose selection it will play a role. decisive the will of the public.